With award season in full swing, professionals and consumers are speculating about which movies, actors and actresses, musicians, and others from the arts and entertainment industries will come out on top. Although prognosticators are basing their winner choices from pools of five to 10 nominees, predicting which trends will impact consumer packaged goods (CPG) can be harder because of the myriad factors affecting the market.

Beverage manufacturers and their research and development (R&D) teams constantly are keeping an eye on what trends are fueling consumers’ beverage purchases in order to develop the next generation of products that will fulfill refreshment as well as functional need states. In Beverage Industry’s New Product Development Outlook 2017 Study, respondents indicated which trends they think will be the most popular in 2018.

According to survey-takers, “natural” once again was perceived to be the latest consumer trend with 62 percent naming the product attribute. This is 10 percentage points lower than last year’s survey, but still was dominant to the other product attributes.

Tied for No. 2 were “clean label,” a newly added attribute to the survey, and “healthy,” with each obtaining 47 percent of the vote, respectively, from survey-takers. “Healthy” was last year’s No. 2 attribute with 60 percent selecting it. In this year’s survey the attribute saw a decrease of 13 percentage points.

To round out the Top 5 were “organic” and “convenience” with 43 percent and 28 percent, respectively. “Energy boosting,” last year’s No. 4 product attribute, dropped to No. 7. Improving its position on the list was “low sugar.” The product attribute was No. 9 in the 2016 study when 26 percent of respondents listed it as a latest trend. This year’s study saw the attribute increase its position by 1 percentage point (27 percent), but this placed it in the No. 6 slot.

Completing the Top 10 were “low calorie” (25 percent), “high protein” (18 percent) and “probiotic/prebiotic” (18 percent). The only product attribute from last year’s Top 10 list that dropped out was “vitamin, mineral fortified.” Last year, the attribute was No. 8, but it fell to No. 12 in this year’s survey. 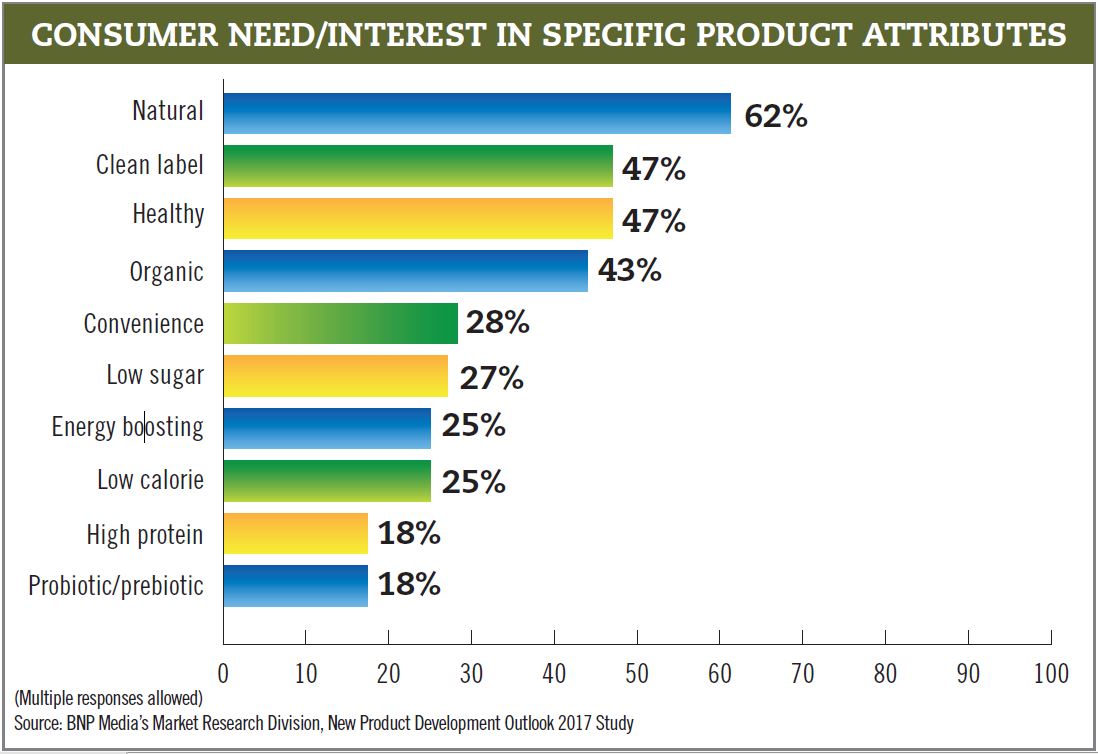 Pick of the patch

Beverage-makers have always had a plethora of flavor options from which to choose when developing new products; however, as consumer tastes have evolved to include more exotic selections, we are seeing that old favorites still remain perennial choices.

When asked whether berry flavors are used in their beverage development, two-thirds of respondents noted its presence within their company. This is down from the three-quarters who indicated berry flavor usage in last year’s survey.

Among the survey-takers who stated they use berry flavors, the mean usage of flavors used by each responding company was 3.67, down from last year’s 3.82 mean. 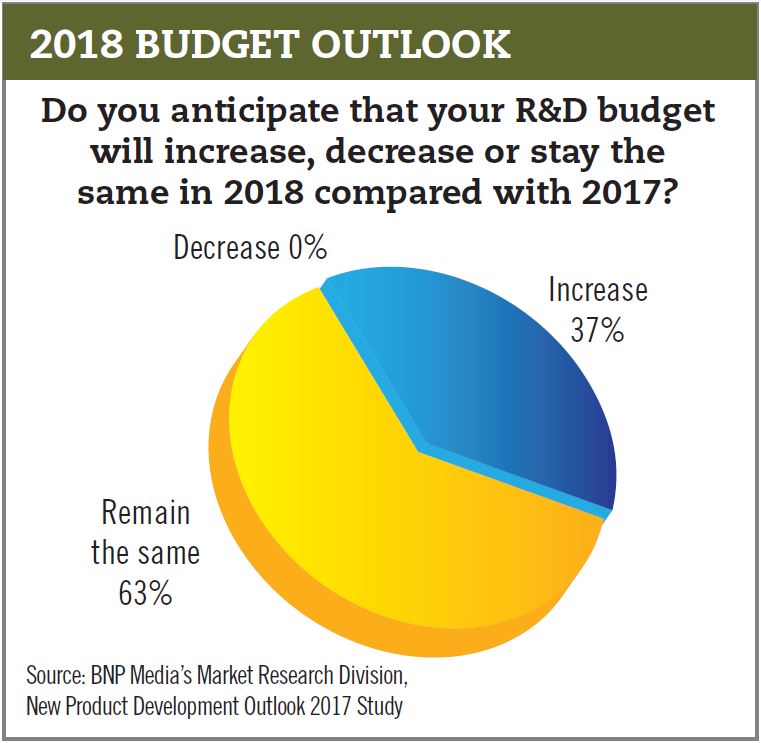 The top non-fruit flavor selected by respondents was vanilla, with 66 percent indicating it as such. The Top 3 rounded out with chocolate (50 percent) and coffee (48 percent). This order mirrors last year’s survey with variations among the percent who selected the flavors. For instance, vanilla’s usage increased 7 percentage points compared with last year when 59 percent of respondents named it. Chocolate’s percentage usage remained unchanged as it also received 50 percent last year; however, coffee saw a slight decrease as its usage was down 2 percentage points from last year’s 50 percent.

Other non-fruit flavors that respondents noted as used in 2017 were green tea (38 percent), black tea (34 percent), cinnamon (32 percent) and root beer (30 percent). In comparison to last year’s survey, root beer was the only non-fruit flavor to show a percentage point increase. With a 10 percentage point bump from last year, root beer was able to move up from No. 11 to No. 7 in this year’s survey. Although respondents were not asked what beverage categories these flavors were utilized in, the growth of the hard soda segment might have been a contributing factor to the year-to-year improvement.

When selecting which fruit flavors were used in 2017, domestic fruit flavors were indicated among the Top 5, but with one exception. The top fruit flavors named by respondents were lime (51 percent) and peach (49 percent), while apple, coconut and orange had a three-way tie with each obtaining 47 percent, respectively.

This Top 5 differs from last year’s survey, in which the exotic fruit flavors of mango and coconut were accounted for in the 2016 list. Mango led the list with 52 percent, while coconut and peach each had 50 percent, respectively. The remaining two of the Top 5 were lemon (48 percent) and apple (44 percent).

Also seeing its fortunes improve in 2017 was ginger. Although it only moved up to the No. 6 positioning from No. 8, ginger had 41 percent of survey-takers list it as a flavor used in 2017; this is a 6 percentage point increase from 2016. 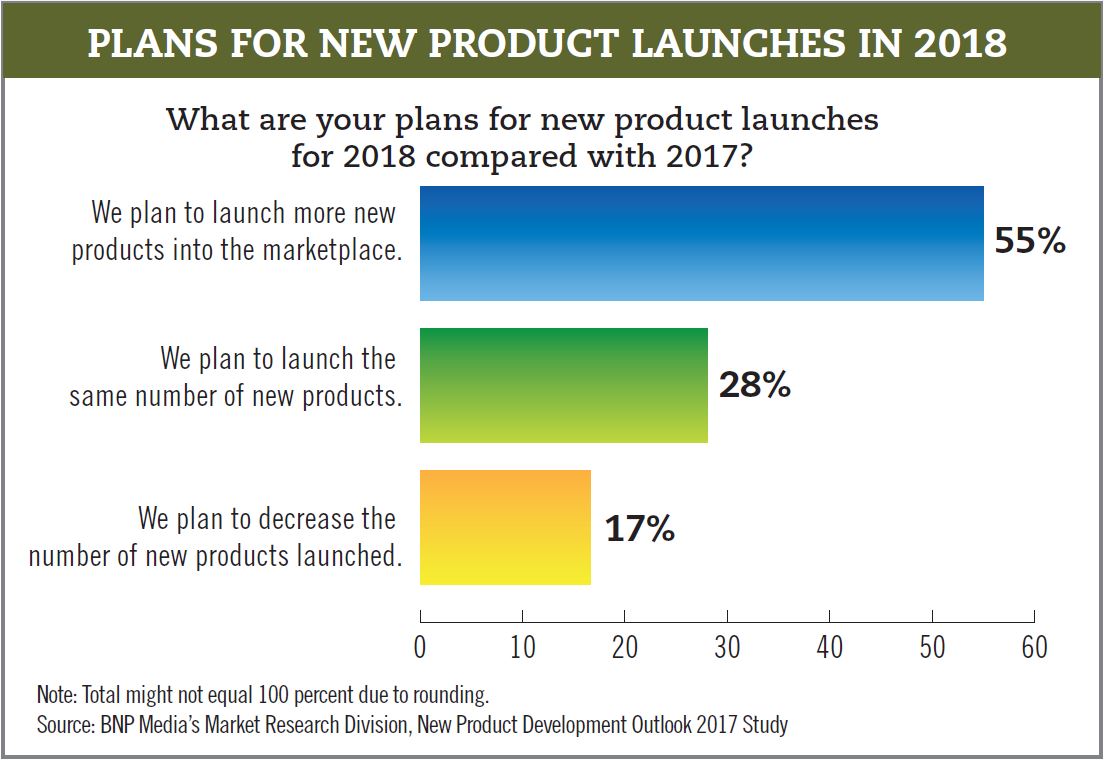 For the year, vanilla emerged as the top-selling flavor with 23 percent of survey-takers listing the non-fruit fruit flavor. It topped the other non-fruit flavors that respondents named as top-sellers, which were chocolate (17 percent), coffee (15 percent), black tea (9 percent), and a three-way tie among green tea, root beer and tea (other) with 8 percent, respectively.

Within berry flavors, the top-selling flavor used in 2017 was a three-way tie among blueberry, raspberry and strawberry with 13 percent, respectively. The list rounded out with blackberry (11 percent), berry (8 percent), cranberry (8 percent) and acai (6 percent).

When looking toward 2018, respondents have high expectations for various flavors. Grapefruit is the most anticipated best-selling flavor for 2018, with 25 percent of survey-takers naming the fruit flavor. Other fruit flavors also are expected to do well in the new year. Twenty percent of respondents listed apple as an anticipated top-selling flavor, followed by a three-way tie among coconut, ginger and orange with 18 percent, respectively.

Among non-fruit flavors, vanilla received the most recognition from respondents, as 22 percent named the orchid-derived flavor as an anticipated top-selling flavor for 2018. Other non-fruit flavors that were named by survey-takers were chocolate (13 percent), coffee (13 percent) and black tea (10 percent).