When it comes to new product development plans for beverages, the alcohol sector once again is the one to which companies are most likely to dedicate their resources.

For this year’s survey, sports/energy drinks came in at No. 2 with 33 percent. The list rounded out with water, juice (30 percent); coffee, tea (23 percent); carbonated soft drinks (20 percent); and dairy-based drinks/alternatives (20 percent).

In comparison, coffee, tea, water and juice tied for No. 2 in 2016 with 33 percent, respectively, naming these categories. Sports/energy drinks came next with 32 percent last year. Similar to this year’s survey, carbonated soft drinks (26 percent) and dairy-based drinks/alternatives (25 percent) rounded out the list. 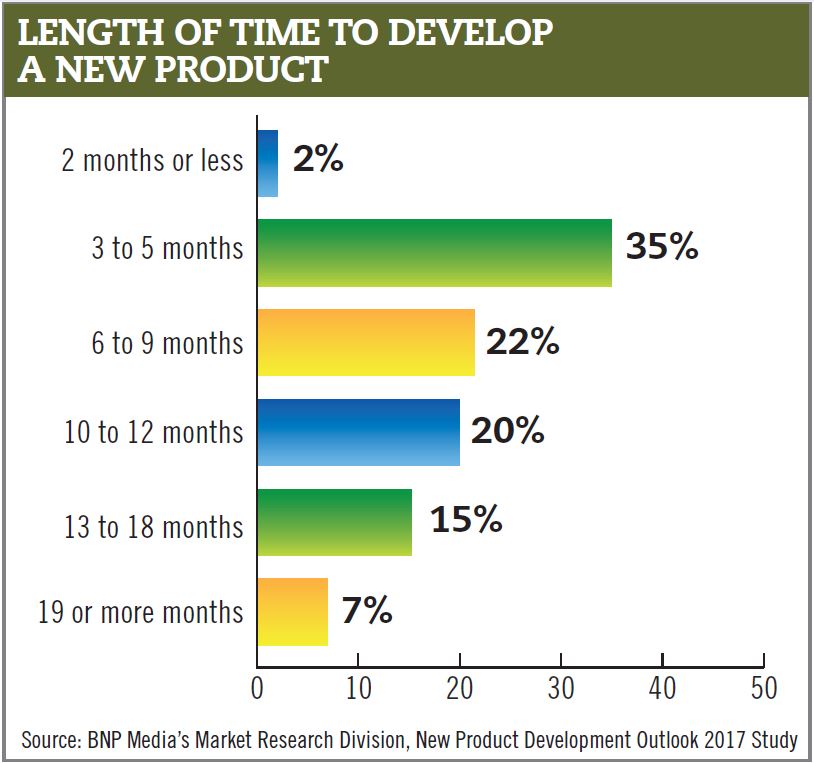 When searching for new product idea generation, beverage-makers are turning to a variety of sources. When asked to select all that apply, 62 percent of respondents stated that customers/customer demand was an idea creator. This was followed by consumer trends with 60 percent of survey-takers naming this source.

Other popular idea generators in this year’s survey were in-house through teams and meetings (52 percent), marketing and sales (52 percent), and consumer research/testing (48 percent).

As indicated by its position as the No. 1 product attribute, natural continues to have a significant impact on new product development.

In 2018, an average of 87 percent of respondents plan to use natural flavors in beverage product development, while two in five respondents indicate that this will be an increase compared with previous years. In an open-ended question regarding the reason for the increase, motivators included healthy related, market related and consumer demand. 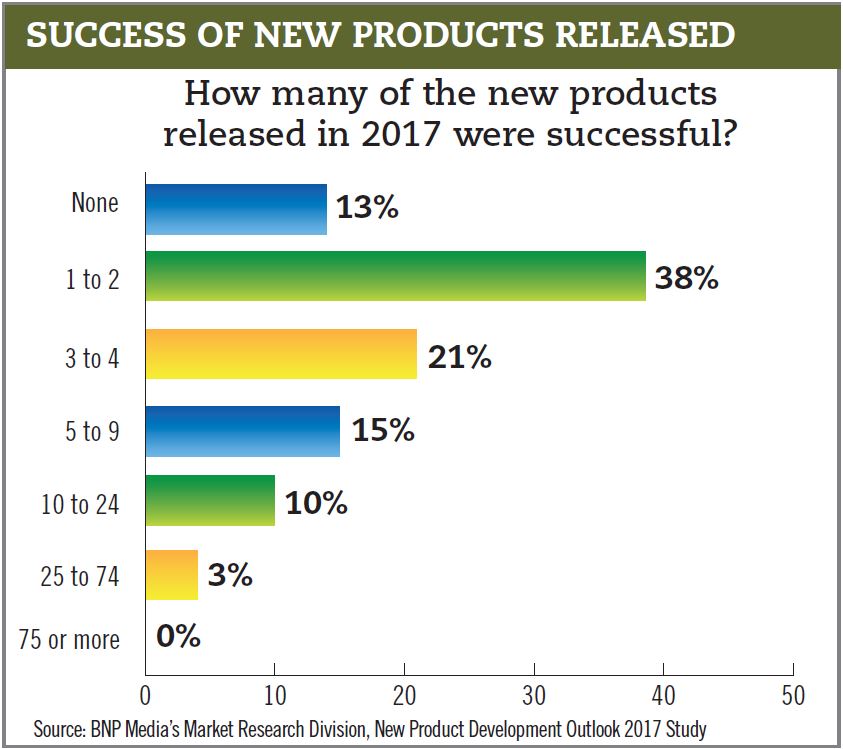 The average percentage of respondents utilizing natural flavors in 2018 was identical to the percentage that was listed for 2017 (87 percent); however, last year’s survey showed that slightly more than half indicated that their natural flavor usage was an increase from previous years.

When it comes to natural colors usage for 2018, an average of 83 percent of survey-takers noted their plans to use these solutions in beverage development. Of those noting their usage, 33 percent indicated that this will be an increase from previous years.

These numbers differ slightly compared with last year’s survey. According to the previous survey, an average of 85 percent of respondents indicated that they were going to use natural colors in 2017 for beverage development. Among those, 39 percent noted that it was an increase compared with previous years.

When developing new products, the size of the company and employees working on these development plans can vary greatly.

In regards to the number of employees who work on the development of new products, this year’s survey showed a mean of nine employees with a median of five. In comparison to last year’s survey, the mean was 14 while the median was five.

When it comes to keeping things in-house or outsourcing, in-house remains the popular choice, as three-quarters are not planning to outsource the new product development process. The remaining quarter that do plan to outsource indicated a variety of reasons with prototype development being the most noted. However, because of the small sample size of those that plan to outsource, results should be interpreted with caution in regards to the areas offered.

Just as the saying of “there is no ‘I’ in team,” many survey-takers embody this concept as nine in 10 respondents indicate this style when developing new products. Respondents were instructed to select all departments that apply when asked which ones are involved in the new product development process.

The top department noted was sales/marketing with 77 percent indicating it as such. This is a 4 percentage point increase compared with last year’s survey in which sales/marketing also was No. 1.

Other top departments listed by this year’s respondents were upper management (68 percent), R&D (58 percent), production (51 percent) and customers (42 percent). All of these departments were in last year’s Top 5 with some variations. For instance, production was No. 3 last year, with 46 percent listing it, while R&D was No. 4, with 44 percent naming the department.

Involvement from suppliers showed a slight edge to those not utilizing their participation. Fifty-eight percent of survey-takers stated that they do not involve suppliers in the new product development process. Of the 42 percent that do, the most noted role was to provide raw materials/ingredients. However, because of the small sample size, this should be interpreted with caution. 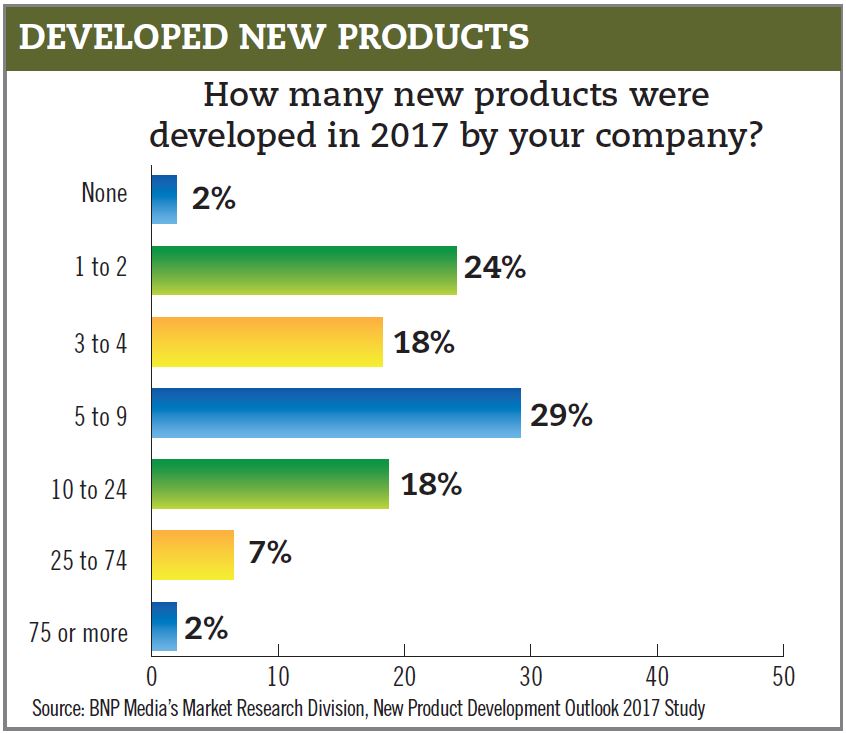 When it comes to the development timeframe, it takes respondents an average of nine months to develop a product from inception to launch. The majority (67 percent) noted this was about the same as previous development efforts while just more than a quarter (27 percent) indicated that this was faster.

In comparison to last year’s survey, the average timeframe was seven months, which one-third (33 percent) of respondents stated was faster than previous years.

Going into 2018, 55 percent of respondents indicate that they plan to release more new products into the market compared with 2017. This is slightly above last year’s survey results in which 53 percent noted plans to increase their new product launches for 2017. BI