A child informing a parent whether or not something is cool might not be an occurrence so rare that it inspires a business plan, but when Rose Cameron’s two 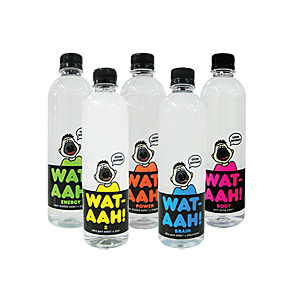 sons told her they did not want to drink water because it was boring, the former marketing executive set out on a mission.

“If you look at Coke, the line is ‘Open Happiness,’” says Cameron, the founder and chief executive officer of New York-based Wat-aah. “You think of Pepsi and it was the ‘New Generation.’ You think of Red Bull with acceleration and energy. All things that my kids would love to hear — I would love to hear — it’s just happy and fun, and water isn’t; it’s too mature, it’s too staid, it’s too boring.”

Before launching Wat-aah in 2008, Cameron researched the children’s drinks market. At the time, the awareness of childhood obesity was just beginning, Cameron notes, but she was troubled by the statistics that one in three children is obese and that this generation of children is expected to have a shorter lifespan than their parents. Between 2005 and 2007, she found that 36 beverages were introduced that were aimed at the younger demographic and all of them contained juice, colors or sweeteners.

Recognizing the need and market void, Cameron called on her background as a strategic planner in marketing and advertising and gathered her two sons and her partner’s children around her dining room table to discuss existing bottled water brands and the potential for a kid-aimed brand. The name Wat-aah was born during the informal focus group after the kids screamed “water,” and it sounded like “Wat-aah,” Cameron explains. The screaming also inspired the brand’s logo, which came from her sons drawing each other with large open mouths.

“All along, the colors were chosen by my kids,” Cameron says. “They chose the style, the sleek-shaped bottle; they decided on the hair, on the teeth, everything. It’s not about me; it’s about the kids.”

Wat-aah’s products do not contain any calories, colors or sweeteners. Varieties are often inspired by parents who ask for particular fortifications, and the colors assigned to the packaging are influenced by kids, Cameron says. Wat-aah is available in Brain, which features electrolytes; Z, which is fortified with zinc; Energy, which has added oxygen; Power with magnesium; PH+, which is an alkaline water with an elevated pH of 9.0; and pure spring water, Body.

On June 21, Wat-aah celebrated Go Skateboarding Day with the brand present at events in New York, Detroit, Chicago, Boston, Baltimore, Miami, Los Angeles and more. Skateboarding is a new division for Wat-aah, which has developed a Facebook page. Its sponsoring professionals and amateurs in the sport and is launching a dedicated print campaign.

For the last two years, Wat-aah has been the sponsor of the Let’s Move! Flash Workout supported by the National Association of Broadcasters Education Foundation, musician and actress Beyoncé

Knowles and First Lady Michelle Obama. This year, Wat-aah was the exclusive sponsor and organizer of the event with more than 150,000 students at more than 600 schools across the United States simultaneously executing the choreographed dance routine from Beyoncé’s “Move Your Body” music video. Wat-aah’s partner Marques Colston of the National Football League (NFL)’s New Orleans Saints also helped gather more than 30 NFL athletes to participate in the dance alongside the students.

Schools helped to fuel the brand’s expansion since its 2008 launch in 75 New York stores. The brand now sells more than half of its volume in school districts, which Cameron expects will double this school year from last year’s 2,500 schools and districts. Wat-aah’s adoption in schools also helped to grow distribution around those districts because kids want the brand at home as well as at school, Cameron says. The brand is available in more than 10,000 stores across the country including Whole Foods Market, Albertsons, Shop-Rite, Food Lion, Shaw’s and full distribution in Kroger and Kroger banner stores.

Along the way, the company has heard from kids who are loyal to Wat-aah and recently launched a No. 1 fan search in time for back-to-school based on the feedback, she says. The winner of the contest will be able to design his or her own limited-edition bottle for Wat-aah.

Beyond keeping Wat-aah cool, Cameron says she strives for the brand to be part of the overall solution in the fight against childhood obesity.

“There’s not one solution, and what we want to show with Wat-aah is that we are part of that,” she says. “Through our success, we hope that people will see what can be done because kids, yes, they are the future, but they get it,

too — especially if you know how to market health in a cool and contemporary way. The statistics are troubling, so we must do something.” BI