In the Maroon 5 song “Sugar,” the band references a man’s need for love from the woman he cares about when they sing, “Need a little sweetness in my life, your sugar, yes, please, won’t you come and put it down on me.” However, if the songwriters had been watching the sweetener trends, they might have been more inclined to mention a more in vogue sweetener.

When the Food and Drug Administration (FDA) released the 2015-2020 Dietary Guidelines, the guidelines garnered attention as it recommended a limit for Added Sugars of no more than 10 percent of a person’s daily calorie intake. That recommendation has been one of the collection of factors and trends that have resulted in the evolution of how consumers are shopping today.

“Several consumer trends have influenced the usage of natural, zero-calorie sweeteners including the keto diet and the demand for plant-based foods,” says Phil Coggins, senior director of commercial sales for Pyure Brands LLC, Naples, Fla. “Generally, consumers are avoiding sugar. According to Mintel research, 87 percent of shoppers are limiting the amount of sugar in their diet. Consumers sight disease prevention and weight management as key reasons for sugar reduction.”

Consumers’ desire to reduce sugar intake also is having an effect on the products that they purchase. Hoffman Estates, Ill.-based Tate & Lyle conducted internal proprietary research in November 2018 that showed the extent that this trend was spanning.

“According to Tate & Lyle research, 51 percent of consumers surveyed globally want to drink healthier beverages to change their sugar intake,” says
David Nichols, category development and planning manager at Tate & Lyle. “As they seek to balance both taste and health, the opportunity has opened for innovative ingredients to play a role in delivering taste while also appealing to specific health interests. Zero-calorie sweeteners are a great tool for enabling sugar and calorie reduction in beverages, but
35 percent of those same global consumers surveyed also said they are looking for products with more natural ingredients.” 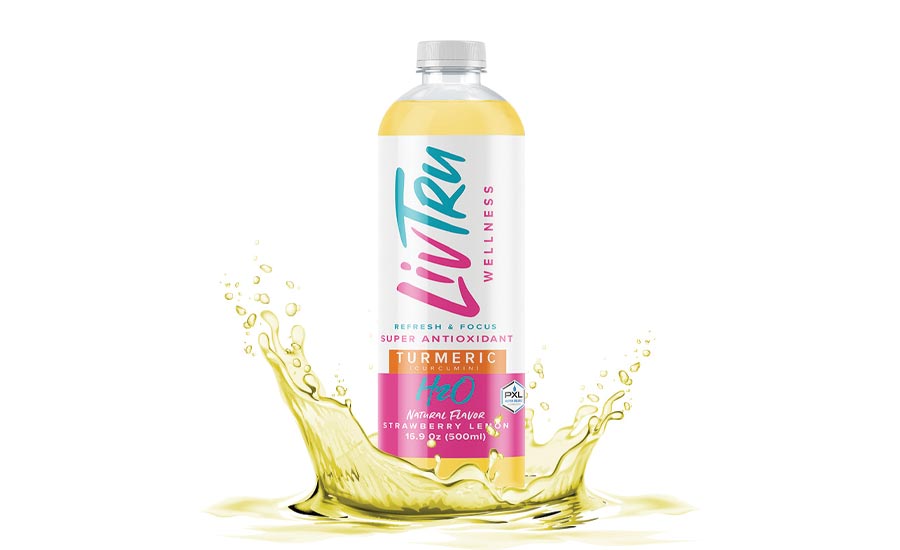 Stevia has risen to be a popular sweetener solution for new age beverages. Liv Tru performance beverages are lightly sweetened with stevia, it says. (Image courtesy of Liv Tru)

Although artificial sweeteners were able to address the zero-added sugars issue, the proliferation of natural trends also was impacting the use of sweeteners.

“While today’s consumers pressure developers to reduce or eliminate sugar in their products, they are unwilling to sacrifice sweetness, mouthfeel and delicious taste, and sugar is often largely responsible for delivering those benefits,” says Nancy Hughes, president of Chino, Calif.-based Apura Ingredients. “Coupled with the overall trend toward natural and low-calorie ingredients, many formulators have started utilizing low- and no-calorie sweeteners at a higher rate than ever before.”

Andy Ohmes, global director of high intensity sweeteners for Cargill, Minneapolis, details how these trends have contributed to the growth of natural, zero-calorie sweeteners.

“Two big trends are driving the beverage space: the desire for products with less sugar and a move toward simpler labels,” he says. “High-intensity sweeteners like stevia address both these trends. Our next-generation stevia products have opened the door to dramatically improved, reduced-sugar beverage formulations.

“At the same time, consumer perceptions of stevia continue to grow,” Ohmes continues. “According to Cargill’s proprietary online research of 13,000 consumers, when compared to 12 of the leading low/no calorie sweeteners, consumers ranked stevia leaf extract as the most healthful, as well as having the most positive perception on the label.”

The rise of stevia

A vanguard sweetener in beverage formulation, stevia did weather some challenges at its onset, experts note.

“Stevia was first introduced in 2008 in the form of traditionally leaf extracted Rebaudioside A,” Pyure Brands’ Coggins says. “In the beginning, many of the original stevia were extracted at low-purity levels. Consequently, stevia was somewhat overlooked due to negative taste considerations. But increased demand for alternatives to sugar spurred innovation to solve the taste and pricing challenges of stevia.

“Eleven years later, there are a myriad of stevia formats at different purities that offer food and beverage manufacturers many options,” he continues. “Fermentation, enzyme modified, stevia, glycosylated stevia, bio-converted stevia and leaf extracted advancements in Reb M and Reb D are all examples of stevia innovation.”

“Arguably the best-known natural sweetener, stevia is a low-caloric sweetener that is approximately 200-350 times sweeter than sugar,” she says. “It’s long been associated with helping develop functional foods and beverages but it is now seeing use far beyond these categories as a low-calorie option to sweeten reduced calorie soft drinks, teas, and more.

“The challenge with stevia is to get the consumer to overcome their initial experience with the sweetener,” Kenny continues. “Most of the earlier prototypes had a bitter licorice aftertaste that was not very appealing. Stevia has since evolved into an entire portfolio of extract variants that have a much better taste profile than what was initially offered.”

Cargill’s Ohmes further elaborates on the time and investment that ingredient suppliers have put into stevia. “We’ve come a long way in the past decade,” he says. “Cargill alone invested 300,000 hours studying the stevia leaf, resulting in tremendous advances in our stevia portfolio. Where the early stevia sweeteners were built on Reb A, one of the most plentiful of the stevia leaf’s steviol glycosides, today’s improved stevia-based sweeteners rely on complex blends of highly purified stevia compounds formulated to deliver a more sugar-like taste with fewer offnotes.”

Although advancements have been made to address stevia’s taste profile, some beverage manufacturers recognize the value of masking when working with natural sweeteners.

“Natural and zero-calorie sweeteners achieve the goal of reducing sugar content in applications but often come paired with an off-flavor or other taste challenge that requires a custom taste solution,” says Phil Caputo, marketing and consumer insights manager for Brooklyn, N.Y.-based Virginia Dare. “The most common issues that natural and zero-calorie sweeteners face are delayed sweetness, lingering sweetness, and a bitter, metallic, licorice, or herbal off-taste.”

Because of these profiles, companies like Virginia Dare have developed platforms to enable beverage-makers to have the best of both worlds: natural, zero-calorie sweeteners with a desirable taste.

“These ingredients often require a custom taste-improvement solution, and formulators can collaborate with companies like Virginia Dare to deliver the taste their customers expect and prefer,” Caputo says. “Our systems are application-specific and tailored to the product for optimal performance.”

As technology has helped refine stevia taste profiles, the sweetener solution has grown in popularity within beverage formulations. However, beverage-makers have a bevy of natural sweetener solutions nowadays.

“Erythritol and monk fruit are both viable options for beverage-makers to use in conjunction with other zero-calorie sweeteners in their beverage formulations,” says Shari Mahon, senior vice president of application technology for SweeGen, Rancho Santa Margarita, Calif. “Using erythritol can add benefits in the mouthfeel and sweetness profile when blended with stevia. Erythritol can pose a challenge in that it can give a cooling perception at higher levels, which can limit the amount we can use in formulations due to the sensitivity of the consumer to the cooling effect.

“Monk fruit can be utilized as a stand-alone sweetener or in conjunction with other sweeteners,” she continues. “When using monk fruit, the combination of monk fruit and stevia gives a well-rounded, full sweetness profile. The two key challenges I have experienced in formulating for clients with monk fruit is the supply and the price.”

Monk fruit can be used as a standalone sweetener or in conjunction with others. Gac Relax uses organic monk fruit as its sole sweetener. (Image courtesy of GacLife LLC)

Thom King, chief food scientist and chief executive officer at Icon Foods Inc., Portland, Ore., also touts the benefits of erythritol and monk fruit amalgamations for beverage formulations. Yet, he also details the challenges when it comes to the growing demand for these sweeteners.

“Some challenges are mostly supply chain oriented,” he says. “While erythritol is plentiful and affordable, monk fruit is not. Monk fruit supplies have contracted quite a bit creating scarcity and driving up prices by at least 50 percent. This is projected to continue going up until the end of Q4 2020. This is where it makes sense to use an erythritol, stevia monk fruit blend to save money but, what’s more it’s taking advantage of the masking properties those two high-intensity sweeteners have in regarding to their respective off-note.”

However, the U.S. sweetener market shifted again in 2019 with the recent FDA ruling on allulose, which states that it is exempt from being included in the amount of Total Sugars and Added Sugars on the Nutrition Facts Label.

“Tate & Lyle has been an active advocate for allulose to be exempt from being included in the amount of Total Sugars and Added Sugars on the Nutrition Facts label, so this news is very exciting and well worth the wait,” Nichols says.

Akshay Kumar Anugu, senior associate of applications for the global sugar reduction division at Ingredion Inc., Westchester, Ill., explains that allulose boasts a sweetness profile that is 70 percent as sweet as sucrose, which is remarkably close in terms of sweetness levels.”

Because of its regulatory limit, allulose cannot enable 100 percent sugar reduction, Kumar Anugu notes. But, it now can play a role in the future of hybrid sweetener solutions.

“A combination of Reb M and erythritol/allulose can provide a cost- and taste-effective sugar reduction solution compared to a standalone Reb M,” she says. “Improving the sweetness temporal profile (stevia and allulose), leveraging synergy between different sweeteners (stevia and sugar) and improving stability (using Reb D at lower levels to avoid solubility issues) are some other reasons for exploring sweetener systems.”