Beverage brands light it up for the holidays

The holidays are nearly here, and consumers and beverage brands also are getting in the "spirit." Some brands, like Grey Goose Vodka, are launching nostalgic print and TV ads. New limited-edition products and packagins also are hitting stores shelves.

Fit for a king!

The final piece of the exclusive Game of Thrones Single Malt Scotch Whisky Collection is available nationwide throughout December, while supplies last. Inspired by the season finale of HBO’s iconic series, the ninth and final bottling in the Game of Thrones Limited Edition Single Malt Scotch Whisky Collection – Six Kingdoms – Mortlach Aged 15 Years – pays tribute to the fate of Westeros and the harrowing journey of one of the show’s most powerful characters. Aged for 15 years, the bottling of Mortlach Single Malt Scotch Whisky is presented in a metallic gold cannister that features an intricate pen-and-ink drawing of the three-eyed raven as seen throughout the eight seasons of the series. The 46 percent alcohol-by-volume Scotch whisky was matured in first-fill sherry-seasoned casks and finished in American oak ex-bourbon casks. The whisky imparts a bold, smooth taste with notes of vanilla and spice befitting of those with a noble palate, and retails for $150, the company says. 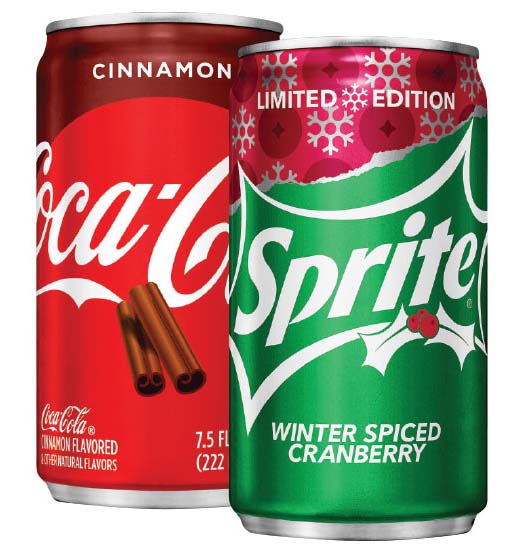 To bring a taste of magic and cheer to the season, The Coca-Cola Co. is releasing two limited-time flavors: Coca-Cola Cinnamon and Sprite Winter Spiced Cranberry. These new flavors, now available on store shelves through Dec. 31, or while supplies last, will give fans a new way to spice up the celebrations ahead in the cold winter months, the company says. Coca-Cola Cinnamon combines the taste of Coca-Cola with a dash of cinnamon flavor, while Sprite Winter Spiced Cranberry infuses the lemon-lime flavor of Sprite with a spice blend and tart Cranberry, it adds. 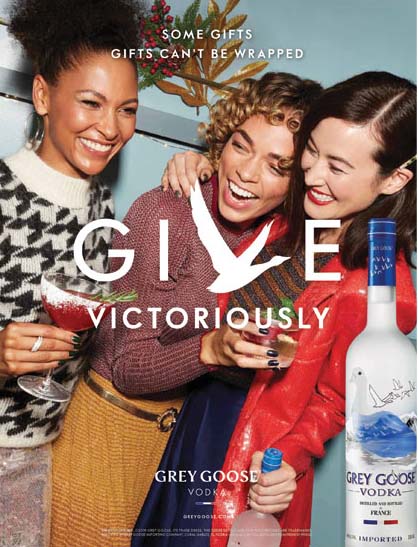 This holiday season, Grey Goose vodka’s new holiday campaign, Give Victoriously, illustrates that the best gifts are meant to be shared experiences. The holiday campaign consists of three 15-second content spots and a selection of print visuals that highlight how unforgettable moments with friends and family shared over Grey Goose cocktails can be the ultimate gift of the season. The ads feature a variety of scenes, such as a group surprised by the arrival of an out-of-town loved one, a man’s spontaneous open-mic performance that captivates his friends, and a holiday party where only the bottle of Grey Goose has been unwrapped. Give Victoriously is an extension of the brand’s global platform, Live Victoriously, which encourages consumers to treat themselves more often, no matter how big or small the occasion may be. “As the leader of the super-premium vodka category, Grey Goose is already synonymous with exceptional quality. Our goal now is for consumers to recognize that Grey Goose is more than a delicious drink: it’s an experience, and one that can turn any moment into a celebration,” said Martin de Dreuille, vice president of global marketing at Grey Goose, in a statement.

“It was a wonderful experience to receive this award from Her Majesty the Queen and it is an honor that I am delighted to receive on behalf of all the people I have worked with in Scotch whisky over the past four decades. Scotch truly is a team effort at every step from grain to glass, and it is a privilege to work in such a special industry.”