Beverage brands reach consumers where they are

Following Apple’s announcement of the next-generation iPhone, powered by iOS 11 with ARKit, Patrón Tequila announced its newly released augmented reality (AR) platform — The Patrón Experience. The app takes iPhone users on an interactive journey to Jalisco, Mexico, giving them a portal to the Hacienda Patrón distillery where they can learn about the unique characteristics and aging process of the tequila with the tap of a finger, the company says. It also offers an in-depth look at the company’s range of tequilas. The AR experience brings to life each tequila by communicating their nuances to consumers, while igniting AR to blur the lines between the ordinary world and the beautiful Mexican landscape, evocative of Patrón’s home in the highlands of Jalisco, it says.

This Partnership Packs a Punch 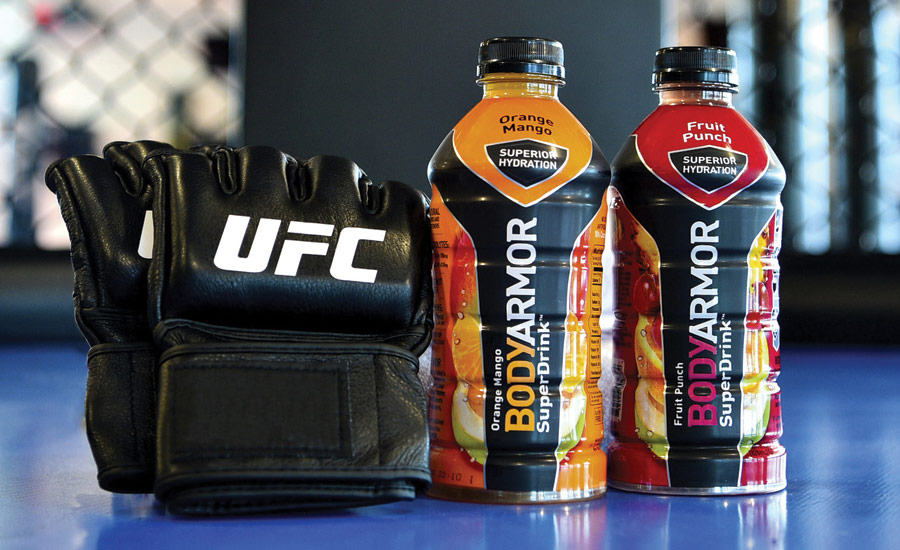 UFC, the mixed martial arts organization, announced a multi-year partnership with BodyArmor Sports Drink, establishing the brand as the first-ever Official Sports Drink of UFC. As a part of the collaboration, set to begin in 2018, BodyArmor will supply its products to the UFC Performance Institute’s “BodyArmor Hydration Stations.” The brand also will serve as the presenting sponsor of select UFC weigh-in events; provide branding inside the UFC’s Octagon during U.S.-based events; and will be integrated across multiple UFC-based social and digital platforms, the company says. “A partnership between the fastest-growing sports drink and the fastest-growing sports organization creates tremendous opportunity for BodyArmor to play an important role in the hydration needs of some of the best athletes in the world,” said Mike Repole, co-founder and chairman of BodyArmor, in a statement.

Mtn Dew and Doritos partnered once again to offer fans the chance to win hundreds of Xbox One X consoles this month, but this time in the form of technology-driven capture-the-flag contests. With the launch of The Drop Zone, a series of augmented reality (AR) events, players could compete to win a new console. On Nov. 10, The Drop Zone events took place in New York, Los Angeles and Chicago. Players downloaded The Drop Zone app and registered to participate in a real-time, location-based AR game to win new consoles. Deploying offensive and defensive power-ups, players were tasked with finding, claiming and keeping control of a virtual console within the app.

As an extension to its 2016 Soccer is Here campaign, Heineken unveiled a new digital spot paying tribute to fans and supporters. The new video features International Spanish star and New York City Football Club (NYC FC) Captain David Villa, who was sporting a green shirt with the word “champion” emblazoned across the front. Elsewhere this season, fans of Major League Soccer games wore shirts with similar words on them. For the first time, soccer fans now can view the full message in a video, which states, “There is an invisible thread that links us all. No matter if you are red or blue, American or Americano, champion or fan, young or ..um.. experienced, our love for this game unites us. And together we chant as one: Soccer is here.” 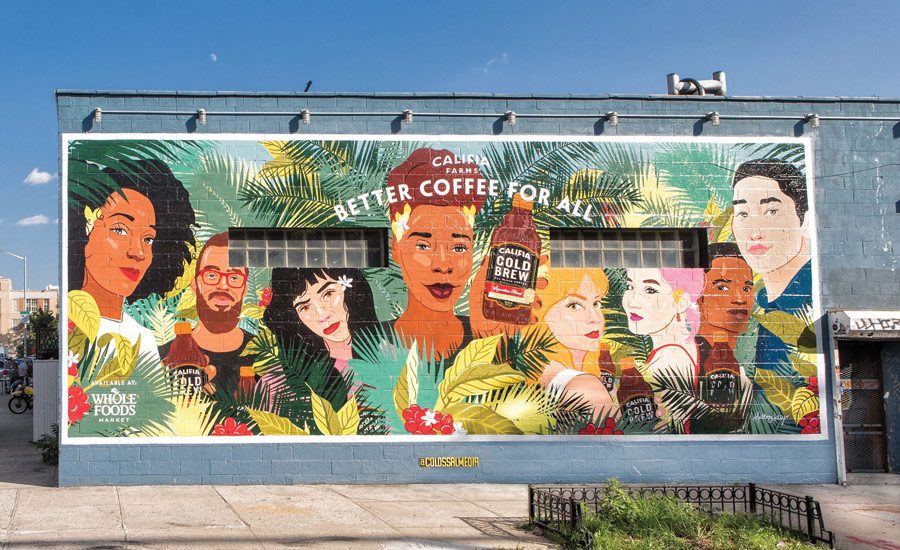 Last month, Califia Farms LLC unveiled its first-ever large-scale billboards in Brooklyn and San Francisco. Each hand-painted mural is a unique art installation inspired by the company’s California roots and offers a brightly colored interpretation of Califia’s Better Coffee for All campaign, the company says. This month, an additional mural is being unveiled in Los Angeles. “We believe that developing great-tasting coffee is its own kind of art, requiring hands-on care, curation and a singular creative vision,” said Greg Steltenpohl, Califia Farms chief executive officer, in a statement. “These vibrant, one-of-a-kind murals beautifully reflect that mission and, we hope, will brighten up the day of passers-by while extending awareness of our delicious Black Label Cold Brew Coffee creations.” 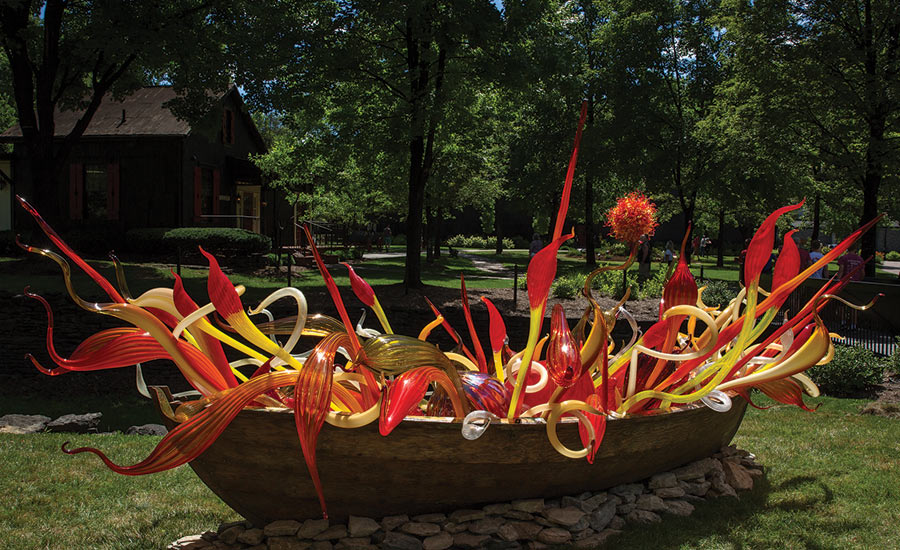 Maker’s Mark extended its Chilhuly at Maker’s exhibition through Dec. 3.

Due to the success of an exclusive art exhibit featuring celebrated artist Dale Chihuly, Maker’s Mark announced that it is extending its Chihuly at Maker’s exhibition through Dec. 3, giving even more visitors to the distillery campus the chance to see the iconic glass sculptures. The exhibition features six large-scale installations as well as the distillery’s permanent piece, The Spirit of the Maker, which are embedded throughout the grounds at Maker’s Mark. Visitors also can view the art during Maker’s Mark Distillery tours and “Chihuly Nights,” which offer an exclusive look at the exhibition glowing with light after dark on Saturday nights through Nov. 25. “Just as my grandparents, the founders of Maker’s Mark, first envisioned, we’re committed to enhancing our visitor experience with culturally immersive opportunities unlike any other distillery in the world,” said Rob Samuels, the eighth-generation whisky maker and chief operating officer of Maker’s Mark, in a statement.

Rolling out the Coffee 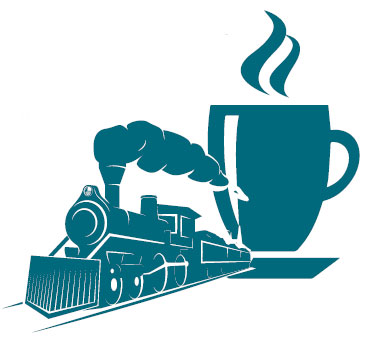 The Polar Express had hot cocoa, and now Amtrak has its own hot beverage. Dunkin’ Brands announced it has expanded a deal with Amtrak to make its Dunkin’ Donuts Original Blend and Dunkin’ Decaf the exclusive coffees offered on all Amtrak Northeast Corridor trains. Amtrak’s Northeast Corridor trains annually serve about 12 million passengers and started serving Dunkin’ coffee on its Acela Express trains between Boston and Washington, D.C., in April. The coffee is served in first class and café cars and is brewed using the same equipment featured in Dunkin’ Donuts foodservice outlets. As consumers continue to seek out plant-based products, Desert Door launched a new spirits brand and opened Desert Door Distillery on Oct. 20 in Driftwood, Texas. Based on historical artifacts and other findings, sotol, also known as the Desert Spoon plant, was first fermented by the Native Americans living in Texas more than 7,000 years ago and takes as long as 15 years to reach maturity, the company says. Desert Door’s portfolio includes two variations: Original Desert Door Texas Sotol, a versatile and complex spirit that is organic and low calorie; and Desert Door Oak-Aged Texas Sotol, which is 100 proof and distilled using mature sotol plants and aged for 24 weeks in oak barrels, it says. “Sotol has deeper roots in Texas than any other spirit. Desert Door is proud to be bringing it back,” Co-founder Judson Kauffman said in a statement.