As consumers continue to take a hands-on approach to their health, they increasingly are turning to foods and beverages that act as a source of “daily medicine.” Healthy, functional ingredients like turmeric, ginger, carrot, elderberry and green tea are among those aiding consumers in their quest for immune-boosting properties.

According to a June infographic from Chicago-based SPINS LLC, shelf-stable functional beverages make up a $3.3 billion market for the 52 weeks ending April 21, an increase of 11.7 percent compared with the previous year.

The positive performance of the functional beverage category can be attributed to the health-and-wellness trend, says Holly McHugh, marketing associate at Niles, Ill.-based Imbibe. There is a high demand for beverages that improve immunity or help fight off illness and disease, she says.

“Beverages that tout immunity benefits can be found in products from water to soda, but juice and tea are some of the most common categories with immunity claims,” McHugh continues. “Brands are incorporating many different types of ingredients from antioxidant-rich fruit to medicinal mushrooms in these types of products.”

John Sauve, vice president of marketing and business development at Artemis International Inc., Fort Wayne, Ind., also highlights the healthy attributes of functional ingredients within beverages. No matter the specific benefit ascribed to the myriad of health-promoting functional beverages, bioactives with flavonoids are high on the ingredient list that is becoming a foundational driver for innovative functional food and beverages, he says. The market will continue to and more frequently see fruits, led by dark berries, and veggies come to the forefront of this category, he adds.

“Today, people of all ages are way more into what they eat and how they supplement their diets with a specific end benefit in mind, particular to their own lifestyles,” Sauve says.

As previously mentioned, the health-and-wellness trend is driving consumption of functional and immunity beverages, with younger generations leading the way. According to Imbibe’s McHugh, immune-boosting beverages especially are popular with millennials and Gen Xers. “These [types of] consumers are generally out of school and in the work force, and many also have school-aged children, so there’s a greater need to be healthy to manage a demanding schedule,” she says.

Certain health issues like the yearly flu also can drive the need for immunity-boosting beverages, Artemis International’s Sauve says. The yearly flu problem raises the profile of immunity and the understanding of how the immune system works, he explains.

However, beverages that target an immunity-boosting benefit should not be confined to a particular time of year or demographic, but rather targeted toward the general population as everyone’s immune system and gut deserves ongoing attention and care, Sauve adds.

To help fight off illness, beverage-makers increasingly are shying away from developing with just vitamin C to incorporating more diverse ingredients. There’s a growing interest in ingredients that are deep rooted in ancient wisdom, like turmeric, Imbibe’s McHugh says.

For example, Medlie, Sonoma, Calif., formerly known as Zupa Noma, introduced its line of wellness veggie shots. The line’s “Immunity” variety is packed with antioxidant and anti-inflammatory properties such as ginger and turmeric, while also containing vitamin C from carrots and oranges, the company says. It is designed to help balance and restore the immune system, it adds. 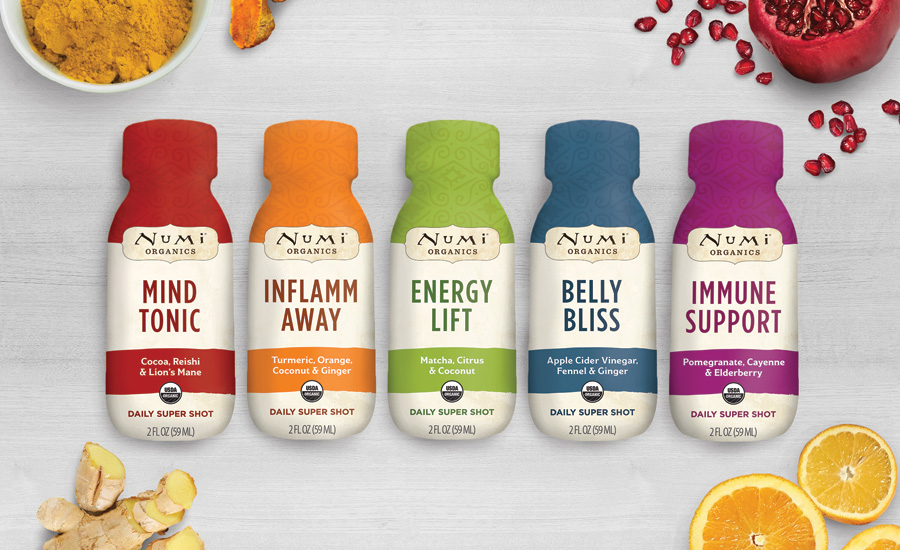 Another increasingly popular ingredient utilized by beverage-makers is elderberry. “One ingredient that has recently surged in the immune health scene is black elderberry,” says Melanie Bush, director of berry science at Artemis International. “While black elderberry has had an extensive history of use as a medicinal berry, recent studies and increased media attention have helped increase the awareness of the immune-boosting power of elderberry, especially in areas of cold and flu.

“The functionality comes from elderberry’s unique flavonoid compounds, namely anthocyanins, which are the color pigments responsible for the dark purple-black color of black elderberry,” Bush continues. “Black elderberry is positioned to be one of the top ingredients that consumers readily associate with immune health.”

To put this into perspective, Artemis International creates and manufactures ElderCraft, a line of premium, scientifically substantiated berry extracts, under its brand Berryceuticals. ElderCraft has been proven to reduce the duration and severity of cold and flu symptoms in long-haul flight passengers, Bush explains.

Although probiotics previously were associated mainly with digestive and gut health, experts now are zeroing in on its importance to the immune system.

“A more recent change in addressing immunity has been impacted by the broadened understanding of where the majority of our immune system is housed — our gut,” Imbibe’s McHugh explains. “Beverages like kombuchas are cross-functional because they are suggested to improve digestion as well as inhibit the growth of harmful gut bacteria and boost immune cells.”

Rockville, Md.-based Packaged Facts also highlights the benefits probiotics can have on the immune system. “To boost the body’s immunity, the standbys have been vitamin C, echinacea and more recently zinc,” the market research firm states in its September 2017 report titled “Probiotics and Prebiotics: Food and Beverage Product Trends.” “But given that the digestive and immune systems of the human body are closely linked, the question becomes what role probiotics can play here.

“According to Ganeden, 70 percent of the body’s immune system actually is in the intestines, and Ganeden reports that is has conducted numerous studies that support the immune benefits of its probiotic, GanedenBC30,” the report continues. “One study demonstrated that GanedenBC30 enhanced T-cell response to bacterial and viral challenges, while additional studies show that the strain increased the response of several key immune modulating cytokines — proteins that aid in immune response.”

As a result of the researched immunity properties found in GanedenBC30, beverage-makers increasingly are incorporating the ingredient. For example, Ventura, Calif.-based KeVita Inc. creates and manufacturers a Sparkling Probiotic Drink fortified with the live probiotic to support immune and digestive health, it says.

Like most beverage categories, premiumization also plays a role in immunity beverages. In order for an efficacious, science-supported functional beverage offering immune boosting properties to rise up, the strategy of premium positioning could indeed be necessary, Artemis International’s Sauve explains.

A “premium” position related to immune health issues and solutions could help the category emerge in the spotlight as no one doubts the importance and heath relevance of the human immune system, as complex as it is, Sauve says. A convenient delivery form for functional and tasty beverages that has been developed for all ages and consumer types could be the leader in the category, he adds. BI

Holistic nutrition proves to be tailored across age groups