There are many things that can weaken consumers’ immune systems, including the common cold, sleep deprivation and even flying in an airplane, where disease-causing bacteria can survive for up to a week inside warm plane cabins, wreaking havoc on the immune system, according to a 2014 study from Auburn University, Auburn, Ala.

Dry air on a plane can cause dehydration so staying properly hydrated with water and boosting the immune system 2-3 days ahead of flying may help prevent this occurrence. Extra vitamin C and B-complex vitamins as well as consuming all-natural fruits and beverages containing antioxidant-rich blueberries, oranges, cherries and elderberries also may boost the immune system, experts note.

“Lots of functional beverages are aiming their pitches toward the modern office professional — Life Aids’s Travelaid is a great example of this from an immunity-beverage perspective, directly marketing to those who travel on a regular basis,” says Jake Knepper, product library solutions manager at SPINS LLC, Chicago.

There are trends, and then there are “single milestone events” that affect changes in consumer behavior, notes John Sauve, director of marketing at Artemis International, Fort Wayne, Ind.

He points to the 2017-2018 deadly flu season and the shortage of Tamiflu as lifting awareness of “all things immunity related.” 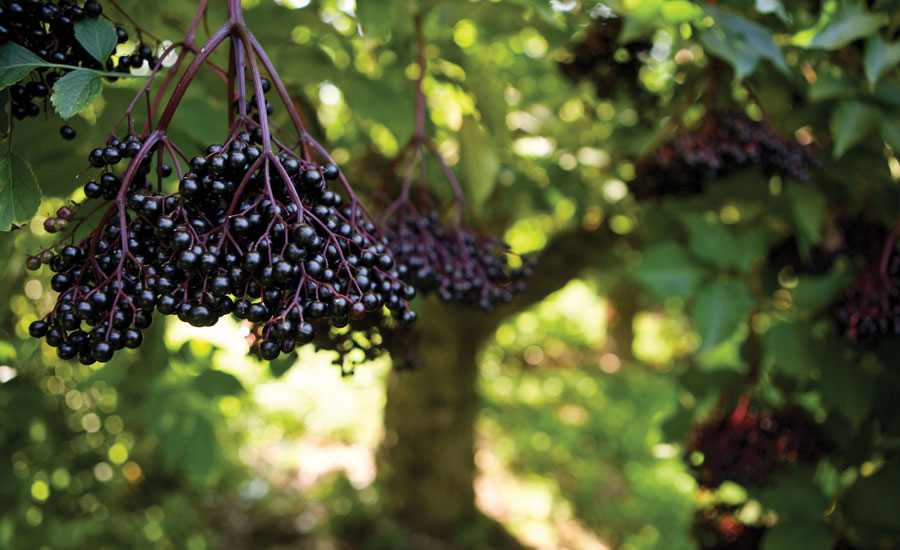 “Beverages as a delivery system for immunity-oriented functional ingredients became an easy and familiar pathway to those immunity benefits,” Sauve explains. “Ingredients that have real immune health benefits like black elderberry, Sambucus nigra, took a giant step forward in national and global awareness and demand during and after the flu.

“Functional beverages that include elderberry as a primary ingredient can become a highly appealing way for consumers of all ages to ‘get their daily dose of immunity,’” he continues. “While well-established in the dietary supplement category for its immune/cold and flu benefits, elderberry will make its way onto the functional beverage playing field over the next 12 months.”

Ingredients that support immune health naturally, like citrus fruits, matcha, turmeric and probiotics are on the rise, says Holly McHugh, marketing associate at Niles, Ill.-based Imbibe. Up-and-coming ingredients include mushrooms like chaga and reshi, and cascara, which is derived from the dried skins of coffee cherries.

“Probiotics sales have soared because they aid with digestive health, and 70 percent of our immune system is housed in our gut,” McHugh says. “Matcha has also exploded in popularity because it a natural source of caffeine, and is also high in antioxidants, especially [Epigallocatechin gallate] (EGCG) which increases T-cell production to reduce inflammation and fight pathogens.”

There has been a clear uptick in functional, clean-label beverages. In fact, 73 percent of consumers consider food and drink products fortified with added nutrients to be appealing, according to GlobalData’s December 2016 report, “TrendSights Analysis: Well-being.”

“Immunity is a highly sought-after function, and according to a survey by Survey Sampling International, consumers are 30 percent more likely to buy beverages with an immune support claim,” Imbibe’s McHugh says. “Consumers want to protect themselves from getting sick, or to get better as soon as possible if they are already sick.

“Beverages are a convenient way to consume ingredients suggested to defend against illnesses from colds to more serious conditions, and you don‘t have to commit to buying a 60-pill-bottle like you would with a supplement,” she adds.

While products with immune-boosting ingredients are prevalent in the market, SPINS’ Knepper notes that many brands avoid too narrow of niche functionality by positioning products for wellness or well-being.

“[These products] may offer immune-boosting effects as that coincides with good health and improved performance,” Knepper explains. “Energy drinks seem to be giving way to general wellness beverages that feature energy elements but focus more on overall mental and physical performance. Detox-oriented beverages are often associated with an immune function, as well.

“… Kombucha, positioned as a general wellness drink, is easily paired with the addition of immune-supportive herbs/botanicals,” he continues. “SPINS data reports 38.2 percent growth over the prior year for kombucha. A couple examples of ingredients often associated with immune benefits include turmeric (plus 76.6 percent) and echinacea (plus 9 percent), are growing by double and triple digits in this segment.”

Based on a Global Data 2015 survey of nearly 28,000 consumers in 31 markets, the immune health category is growing. “It’s a sought-after benefit, perhaps because good general well-being is the foundation of a quality life and the cornerstone of the holistic approach to wellness that consumers are seeking, Kerry’s Cox says.

“Reflecting this, data shows that the number of new product launches carrying functional immune health benefits increased by 23 percent between 2013 and 2017,” he adds.

The functional shots category is doing well in the market, generating a triple-digit, 219.7 percent increase in year-over-year sales, according to SPINS’ data. “Consumers who may not want to drink a regular sized beverage are seeking a more supplemental sized dose may find these appealing,” Knepper says. 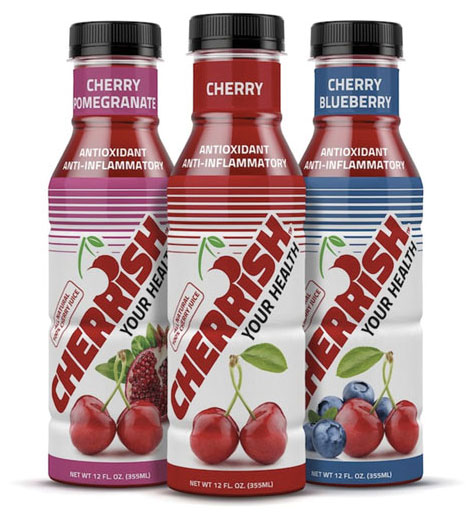 Several ingredients such as elderberries, blueberries and cherries are proven to boost the immune system because of their high levels of vitamin C, vitamin A, potassium, manganese, dietary fiber and antioxidants. (Image courtesy of CHERRISH)

Bellevue, Wash.-based CHERRISH offers a new, self-titled all-natural tart cherry juice featuring the powerful health benefits and flavor of the Montmorency tart cherry. It is packed with phytonutrients, vitamins and minerals that help strengthen the immune system, along with antioxidants that help the body prevent and fight infections, the company says.

“CHERRISH is an alkaline juice that provides superior, anti-inflammatory and anti-acidic actions, as the pulp and skin of the tart Montmorency has the most potent anti-inflammatory flavonoid to be found in foods and beverages,” explains Dan Haggart, CHERRISH’s founder and chief executive officer. “We are finding out that chronic inflammation is the root of most modern-day disease. By introducing an alkaline, anti-inflammatory cherry juice into the body, we can bring down blood and tissue acidity, helping [the body] to return to a state of homeostasis.”

In addition to blueberries and cherries, the black elderberry, Sambucus nigra, is proven to boost the immune system because of their high levels of vitamin C, vitamin A, potassium, manganese, dietary fiber and antioxidants, says Melanie Bush, Artemis International’s chief science officer.

“In addition to the commonly recognized immune-supporting ingredients like vitamin C and zinc, berry flavonoids have been increasing in awareness for their ability to not only boost the body’s natural immune response, but also ameliorate cold and flu symptoms,” Bush says. “Black elderberry, in particular, has been strongly linked to potent immune benefits and products containing elderberry are now actively sought out at the onset of cold/flu season ... [but] they also can help keep the body’s immune system in a state of balance and readiness all year long to combat the everyday stresses that can take their toll on our health and well-being.”

The effects of stress impact all key demographics, from young to old. “One of the most detrimental effects of stress includes the suppression of the immune system and therefore a greater risk of illnesses, such as upper respiratory tract infections,” Kerry’s Cox says. “Science-backed ingredients that are clinically-proven to support the immune system during times of stress can be incorporated into innovative beverage solutions to address this concern.”

Immune health is an emerging trend in the sports and performance beverage category, particularly as athletes at all levels can face harsh environmental concerns such as increased exposure to crowds, travel exhaustion as well as physical and psychological health, experts note.

Kerry offers two clinically proven immune-supporting ingredients: Wellmune, a yeast beta 1,3/1,6 glucan, and GanedenBC30 bacillus coagulans GBI-30, 6086. “Particular strains of baker’s yeast beta glucans, naturally occurring fibers, are emerging as a serious force in the immune health space,” Cox explains. “Probiotics are too, since 70 percent of the body’s immune cells are located in the digestive tract and are acted upon by certain probiotic strains. Importantly, when it comes to health benefits, not all beta glucans or probiotics are created equally.”

Andrew Dahl, chief executive officer of ZIVO Bioscience, also notes the importance of clinical research. Over the past two years, the Keego Harbor, Mich.-based company has conducted 40 studies and in vitro testing on its algal products.

“From a health benefit claim standpoint, extensive in vitro testing has indicated the presence of naturally occurring antioxidant, anti-inflammatory and immune health components in ZIVO algal products,” Dahl says. “This is backed up further with scientific literature supporting the claims, and select in vitro testing in target species. As a result, we can help boost nutritional label claims in ‘natural’ veggie and plant protein drinks and smoothies, whether powdered or ready-to-drink.” BI