Perrier Sparkling Mineral Water launched a new limited-edition collection: PERRIERxWILD. The limited-edition glass bottles were designed by New York-based artist Juan Travieso and are being introduced into the United States as part of a hyper-local campaign focused on Bushwick, N.Y., the company says. PERRIERxWILD marks the next chapter in a long history of the brand collaborating with some of the world’s most distinguished contemporary artists, it adds. The collection includes three designs featuring Travieso’s signature animal characters, as well as glow-in-the-dark designs. To coincide with the release of the bottles, Perrier launched a collection of lifestyle products including bikes, backpacks, sweatshirts and notebooks, featuring the limited-edition PERRIERxWILD designs, the company says. In celebration with the product’s exclusive ties to Bushwick, the glass bottles made its debut in June as part of the 7th annual Bushwick Collective Block Party, it adds. Available in 330-ml bottles, the collection is available in select locations in Brooklyn, N.Y., throughout the summer.

Stoli Vodka announced the launch of its Stoli Harvey Milk limited-edition bottle. Designed to celebrate the life and legacy of Harvey Milk, the limited-edition bottle continues the brand’s long history of supporting the LGBTQ community, the company says. The bottle commemorates the 40th anniversary of Milk taking office in 1978 as the first openly gay elected official in California, it adds. The bottle’s label was inspired by a mural painted by Paraguayan artist Oz Montania, which will help raise money for the Harvey Milk Foundation’s mission that promotes equality around the world, the company says. The limited-edition bottle is part of Stoli’s “Raising the Bar” program, a platform dedicated to the LGBTQ equality movement. The program celebrates individuals and organizations central to advancing diversity and originality within the LGBTQ community, it says. This reinforces Stoli’s recently launched global campaign, Loud & Clear, which was created to encourage people to find what drives them and celebrate their bold and authentic selves, the company adds. 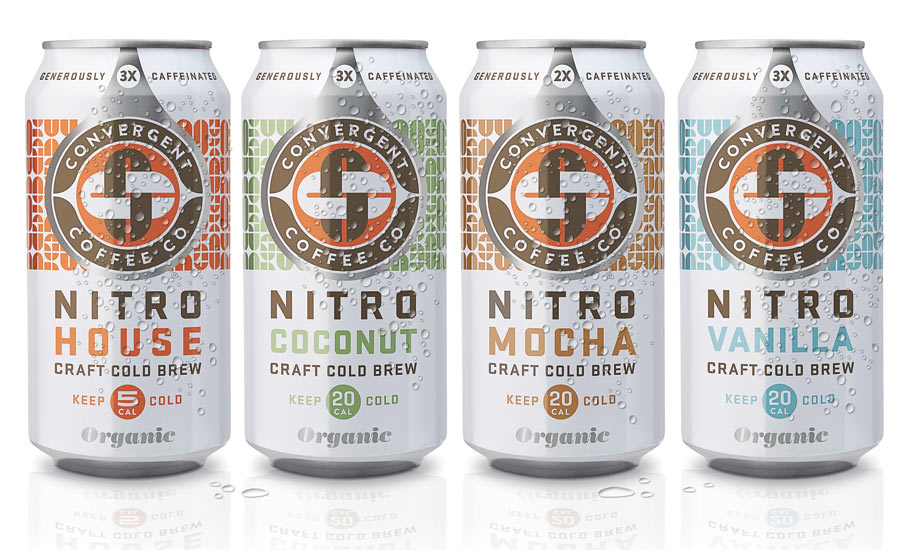 Convergent Coffee Co., a nitro-infused cold-brew coffee brand, announced a new brand design. The brand refresh was designed to elevate the overall aesthetic and appeal to consumers who love coffee and appreciate handcrafted beverages, the company says. The new design features a clean and distinctive look, new logo, stronger flavor identification and clearer benefit communication, it adds. Each 12-ounce can displays Convergent’s points of differentiation: nitro-infused, heavily-caffeinated, certified organic and Fair Trade, and low calories, the company explains. “Convergent Coffee is a pioneer of ready-to-drink, nitro-infused craft cold-brew,” said Steve Ball, chief executive officer of Convergent Coffee, in a statement. “After just a few short years, we are poised to breakthrough on a national stage. As we share our cold-brew coffee with new consumers, we wanted to be sure our look really embodied the carefully crafted style of our cold brews.” 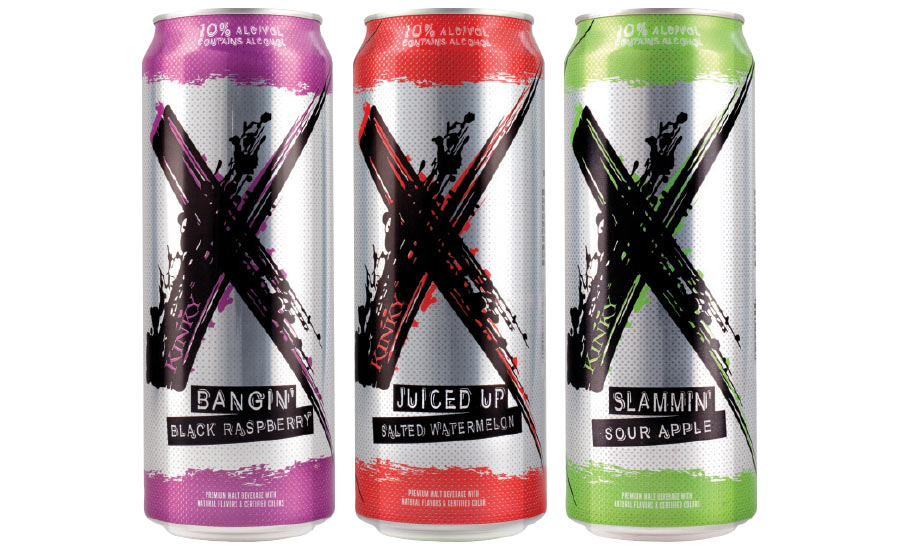 KINKY Beverages released a new 23.5 can size for its X by KINKY malt beverage line. With a 10 percent alcohol-by-volume content, the new size is available in three flavors: Bangin’ Black Raspberry, Slammin’ Sour Apple and Juiced Up Salted Watermelon “Flavored Malt Beverages are popular with millennials looking for an alternative to beer,” said Jim Arkeilpane, vice president of sales, beer division of Prestige Beverage Group., in a statement. “Sixteen of the Top 20 SKUs are single serve and of those,
12 are 8 percent alcohol-by-volume or higher.” 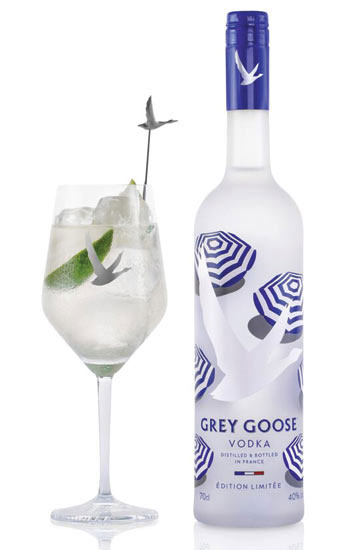 Grey Goose Vodka released the latest iteration of its annual French Riviera bottle series. Designed by renowned illustrator and France native Quentin Monge, the limited-edition bottle captures the laissez-faire attitude of the Riviera and pays homage to the brand’s French heritage, the company says. The bottle reflects Monge’s signature “stylishly whimsical” take on his home region, it adds. The new vodka bottle features blue-and-white parasols, which were inspired by his visit to Saint Tropez and seeing the many parasols around the beach. “The beach parasol is an essential when it comes to the summer holiday. I grew on the beach and would always build huts under my parasol with everything I could find, from towels to floating wood,” Monge said in a statement. The bottle serves as a reminder that the lighthearted and playful spirit of the French Riviera can be experienced anywhere in the world with great friends and amazing cocktails, the company says. 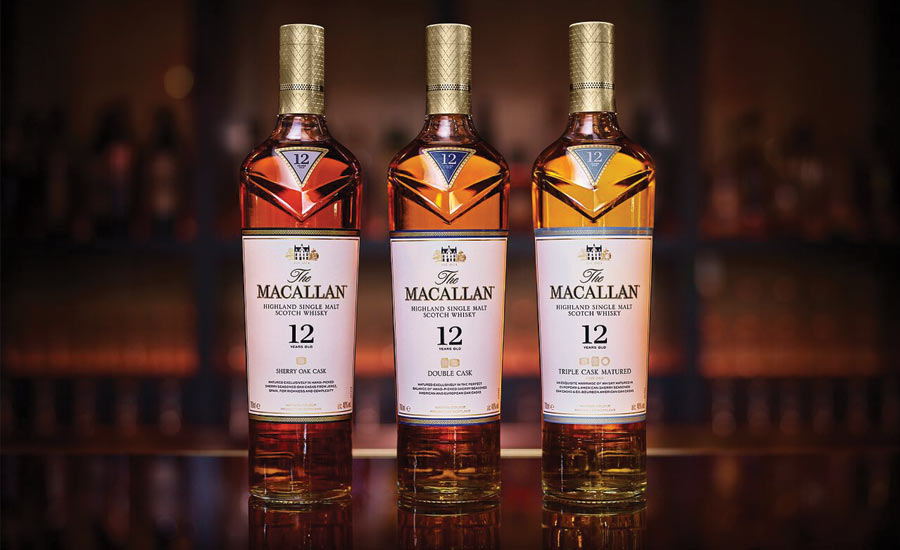 Macallan, a single malt Scotch whisky, unveiled a new bottle design across its portfolio. In celebration with the opening of its new distillery in Speyside, Scotland, the revamped design draws inspiration from the luxury expression of the Macallan Rare Cask, modern design cues reflected in the new distillery and consumer feedback around making the whisky ranges easier to navigate, the company says. The new look also coincides with the core portfolio being redefined into three ranges that reflect the types of cask used to mature The Macallan — Sherry Oak Cask, Double Cask and Triple Cask Matured, it adds. New features to the bottles include a broad-shouldered bottle with a distinctive chevron cut that tapers toward the neck, a clear color-coding system and icons to identify ranges based on cask make-up, real oak wooden boxes for all expressions 25 years or older, and elevated packaging and a heavier glass weight bottle with wider shoulders and a larger base for all expressions 18 years or older, the company says. “With this bold new design, we are highlighting the extraordinary whisky inside the bottles as we show off its unmistakable characteristics, like all-natural color, which we at The Macallan and every whisky enthusiast worldwide really value,” said Sam Leotta, senior brand manager at The Macallan, in a statement. “While the whisky remains unchanged, the new bottle can be displayed anywhere from a world-class bar to a bar cart at home, making the same lasting impression.”