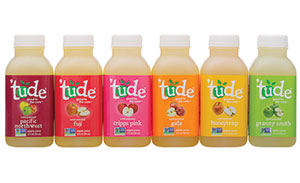 Two men became fast friends as their respective daughters attended the same school, according to Andy Knowlton, co-founder of Fresh Matters LLC, Santa Fe, N.M. Around 2010, Knowlton and Cedric Chastenet were sitting in Knowlton’s kitchen in Seattle sharing a glass of fresh-made apple juice he had prepared. As they talked, Chastenet remarked about the great flavor of the juice, Knowlton says. In fact, Knowlton recalls a remark about how close the flavor of the juice was to the actual fruit. As they focused on the flavor topic, they realized there was no product on the market that either could think of that provided that type of satisfaction, he adds.

According to Knowlton, this was how Fresh Matters’ ‘tude Juice brand began. The name of the brand is a derivation of two words, attitude and gratitude. The founders believe they have the positive attitudes and desires to provide a quality product that serves the juice market. Gratitude is something the company and its employees share as they seek to give back to their local communities and charities, Knowlton says.

However, the two men did not find instant success as they learned about making quality juice in production, Knowlton says. Their first equipment purchases did not provide the quality they expected, and they learned lessons about negotiating performance specifications, he says. They next found a company that would rent them space to produce their product and began production.

Their first foray into selling their product was through five Metropolitan Market stores, a local Seattle grocery chain, Knowlton says. That was in 2011, and by 2012, the company was selling ‘tude Juice in nearby states. They currently are selling product in 40 states, Knowlton says.

Quality remains the top priority for the company, Knowlton notes. Fresh Matters and the ‘tude Juice brand sources its apples, which are the basis of all of the brand’s 16 flavors, from Yakima Valley, Wash., he says. Yakima Valley also is not far from ‘tude Juice’s manufacturing facility in Prosser, Wash., and this helps keep the final product fresh, he notes.

Another quality differentiation is that the company does not use chemical processes on its juices, Knowlton explains. The company’s theory is it utilizes a three-step process to make the juice: get the apples, squeeze the apples and bottle the apples. Knowlton says they do not add chemical additives to their products, which are certified non-GMO. The only ingredient they add is vitamin C to help preserve the product on the shelf. After the bottles are filled, they use a high-pressure process to ensure no organisms are in the product, he says. As a result of this method, the company often hears in consumer taste tests that the juice tastes just like the real fruit, he adds.

High-pressure processing also involves no heat, which is one of the ways the company reduces its carbon footprint by requiring less energy, Knowlton says. In addition, all of the packaging the company uses in its juices are recyclable. This helps the company to meet its goals to help keep the environment clean, Knowlton expains.

Beyond its sales territory growth, ‘tude Juice also has expanded its variety offerings. The brand currently offers 16 flavor combinations, and Knowlton says that he and Chastenet constantly are trying new combinations of fruits and spices. Not all combinations are successful, though. Knowlton recalls efforts to combine coconut water with his apple juice, and the results were less than spectacular, he admits.

Knowlton says the competition in the grocery aisle remains fierce. There are many juice providers as well as alternative drinks available in the beverage aisle, such as sodas, coffees, teas, waters, enhanced waters, etc. He believes it is important to talk with prospective marketers in person. Knowlton also likes to provide in-store samples on occasion and is a believer that the taste will sell itself. He also works to be noticed as much as possible on the shelf. Part of the idea behind the name ‘tude Juice is for recognition. If people see the name, he says, they will tend to stop and question what the name means and what the product is about.

Because ‘tude Juice offers a healthy alternative to many beverages on store shelves, Knowlton says he anticipates good things ahead for the company and its future. “We wanted to focus in on what the Pacific Northwest can do and provide a very authentic, high-quality juice that comes from here,” he adds.