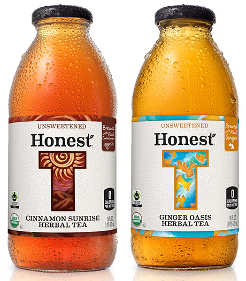 Honest Tea, a wholly owned subsidiary of Atlanta-based The Coca-Cola Co., is expanding its zero-calorie beverage offerings this year with three new varieties: two unsweetened, caffeine-free herbal iced teas and a zero-calorie organic soda. All will be for sale in natural food stores and the natural food aisles of mainstream grocers starting in March. In addition to the new product launches, the company is following through on its commitment to convert all varieties of its Honest Fizz line to organic certification, a goal set since the zero-calorie sodas were first introduced in early 2013.

“We’ve been tinkering with unsweetened drinks long enough to know how challenging it can be to create a satisfying taste. These herbal teas feel more complete than any zero calorie drink we’ve ever created, and the Honest Fizz Golden Ginger Ale has already become an office favorite,” said co-founder and TeaEO Seth Goldman in a statement.

Cinnamon Sunrise Herbal Tea is a blend of organic Vietnamese cinnamon and Fair Trade Certified red rooibos from South Africa brewed together for an unsweetened zero-calorie drink. Ginger Oasis Herbal Tea features organic Indian ginger, green rooibos, and Egyptian lemon grass that are brewed together for a spicy and unsweetened zero-calorie tea. Both teas will be available in 16-ounce glass bottles for a suggested retail price of $1.49-1.79.

Honest Fizz organic Golden Ginger Ale combines organic ginger and other flavors and is sweetened with a combination of organic stevia and erythritol. The carbonated soft drink will be available in six-packs of 12-ounce cans for a suggested retail price of 4.99-5.99 and as single 12-ounce cans for $0.99-$1.25.

The innovation of Honest Tea’s new zero-calorie drinks contributes to the broader beverage industry’s goal of reducing the amount of calories in the American diet. Under Goldman’s leadership and involvement as an American Beverage Association (ABA) board member, Honest Tea is supporting ABA’s commitment to cut the amount of beverage calories consumed a person by 20 percent by 2025.

When the Honest Fizz line debuted in 2013, only one flavor, Root Beer, included organic stevia and erythritol. However, the plan had always been to eventually transition the entire line over to organic ingredients, the company says.

“When we launched Honest Fizz three years ago, we made a long-term commitment to convert the line over to organic certification,” Goldman said. “We’ve been working with our ingredient and packaging suppliers to make our entire Fizz line affordable, organic and delicious. It’s another step in our ongoing journey to democratize organics.”

All six new varieties will be available nationwide at natural food stores and in the natural food aisle of mainstream grocery stores.