In the 1992 film “A League of Their Own,” Tom Hanks as uninspired former Cubs slugger Jimmy Dugan famously scolds his tearful right fielder Evelyn Gardner, “There’s no crying in baseball,” when she bypasses the cut-off fielder and the Rockford Peaches lose the lead. Although the sports and protein drinks category isn’t necessarily hitting it out of the park, the category nevertheless is “rounding the bases” with modest growth.

According to data from Chicago-based Information Resources Inc. (IRI), non-aseptic sports drinks generated sales just north of $7 billion in U.S. multi-outlets and convenience stores for the 52 weeks ending Feb. 23, an increase of 7.4 percent over the prior-year period.

“Sports drinks are running a marathon, not a sprint,” says Madelyn Franz, research analyst of cross-category for Chicago-based Mintel. “Sales have been growing, but pretty gradually, and that’s probably going to continue to be the case over the next few years. The better-for-you drink market is crowded, which isn’t doing the category any favors. That said, it’s holding its own with more natural/clean label launches and new sugar-free formulas.”

Roger Dilworth, senior analyst at Beverage Marketing Corporation (BMC), New York, also notes the modest growth in the sports drinks market. “The sports beverage market grew by about 2 percent in volume and 5.6 percent in wholesale dollars to 1.6 billion gallons and $7.7 billion, respectively,” he says. “The market has been fairly steady in recent years, with growth more difficult to come by due to larger scale, although BodyArmor of course has provided much needed verve.

"For many years, the sports drink market had a consistent message of carbohydrates and electrolytes, but the emergence of BodyArmor as the first viable ‘third’ brand in the market in a long time has shifted the focus to more natural ingredients, such as coconut water, and eschewing of artificial colors etc.,” Dilworth continues. 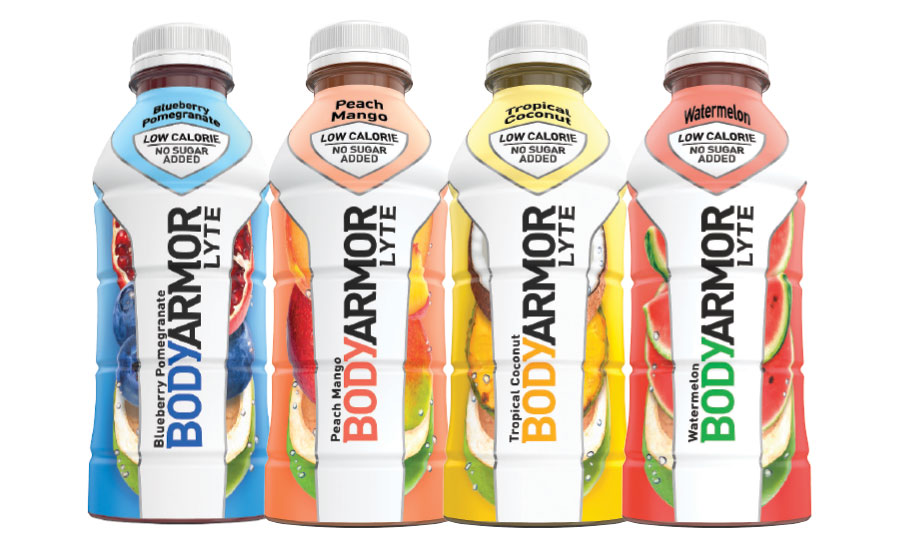 Janie Page, senior director of marketing and new business development at St. Louis-based Beck Flavors, notes that health and wellness trends have consumers seeking healthier drink options, giving rise to new beverage innovations. “Products that boost performance but are low in sugar and full of flavor are driving interest and growth in the category,” she explains. “There is a strong demand for added functional beverages that address lifestyle issues like fatigue and stress. We have seen an increase in complex flavors along with alternative energy additives including green tea, guarana, matcha, electrolytes and ginseng.”

The impact of COVID-19

Yet, with the COVID-19 pandemic hitting the United States with full force in March and spreading across the globe, this has caused potential disparity within the sports drinks category.

“Sports drinks brands are going to feel the hurt, here,” Mintel’s Franz explains. “Brands will need to find new ways to reach their buyers. One big opportunity here is the eSports enthusiast. Consumers are turning to video games to entertain themselves while they’re inside, so partnering or sponsoring games — especially, though not exclusively, sports games — could help brands make up for lost events.

Although the sports drinks market is relatively stable and predominantly the result of significant sponsorships and contracts with colleges and sports team, the pandemic and cancellations of spring sports could hinder the short-term performance of sports drinks, suggests Jacqueline Hiner, analyst for New York-based IBISWorld.

Yet, with consumers sheltering in place, there was a nearly 40 percent surge in non-alcohol sales for the week ending March 15, according to a March 26 IRI report on COVID-19. Among non-alcohol beverages, New York-based Nielsen data reports that sports drink sales were up 7.9 percent for the one-week timeframe ending March 28 versus the prior-year period, eclipsed only by still water, which saw a sales increase of 8.4 percent.

Yet, when comparing the four-week data ending March 28 to the prior-year period, the beverage market experienced a considerable spike in sales growth. For instance, water sales were No. 1 at 58.6 percent followed by sports drinks at 44.7 percent; orange juice (up 38.3 percent); sparkling water (up 36.8 percent); packaged coffee (up 34.2 percent); and total fruit juice (up 31.9 percent), Nielsen states.

Mintel’s Franz also notes the climb in alcohol sales during the pandemic as consumers seek some “liquid relief.”

In addition to burgeoning alcohol sales via in-store and eCommerce, Franz believes the pandemic will drive up sales for sports and protein drinks. “I’d expect to see some spikes for both. Anything and everything shelf-stable has been consistently difficult for stores to keep stocked over the last few weeks,” she explains. “More than that, sports drinks will likely be popular. While they’re typically seen as a post-workout hydration/recovery beverage, anyone feeling under-the-weather will likely be looking for those same functional benefits.”

Encompassing about 66 percent of market share, Gatorade, a brand of Purchase, N.Y.-based PepsiCo, dominates the market, followed by the Atlanta-based The Coca-Cola Co.’s Powerade lineup.

“Gatorade including all sub-brands was up about 2 percent in volume, while Powerade is estimated to be down slightly,” BMC’s Dilworth says. “BodyArmor has grown the fastest, which of course prompted The Coca-Cola Co. to acquire a minority of BodyArmor and is likely to acquire 100 percent eventually. The surge in BodyArmor has forced Gatorade to innovate with zero-calorie, organic and natural formulations, to good success in some cases.”

Despite a deceleration of Powerade and Powerade Ion4 at 17.5 percent and 7.3 percent, respectively, Mintel’s Franz suggests that it could be Powerade’s time to shine.

“Earlier in 2020, they revamped their product line for the first time in a decade or so,” she explains. “They redesigned their ION4 packaging and added two new drinks: a sports drink with creatine intended for high-intensity athletes and a functional flavored water with added electrolytes. Diversifying offerings to meet the specific needs of different groups of exercisers would really help set them apart from the other drinks available.”

A brand of BA Sports Nutrition LLC, Whitestone, N.Y.-based BODYARMOR is expanding distribution through a 2018 minority stake with The Coca-Cola Co. It offers “Superior Hydration” in three lineups: BODYARMOR Sports Drink, which offers natural ingredients from potassium-packed coconut water,  electrolytes and no artificial sweeteners, flavors or dyes; BODYARMOR LYTE, which contains just 20 calories and 2 grams of sugar; and BODYARMOR SportWater, a premium alkaline sports water with a performance pH of 9+.

IRI data reports that BODYARMOR Super Drink sales were up 98.6 percent and totaled $537 million in multi-outlets and convenience stores for the 52 weeks ending Feb. 23.

Product innovation and sweeping sugar-free claims are among the trends shifting the balance from traditional to diet sports drinks, experts note.

Launched in June 2018, G Zero (Gatorade Zero) offers a drink that “has no sugar while maintaining the same proven hydration and fueling benefits of Gatorade Thirst Quencher,” the company said in a statement.

Unveiled in 2017, the no sugar-added BODYARMOR LYTE is available is seven flavors including Blueberry Pomegranate, Tropical Coconut and Peach Mango.

IBISWordld’s Hiner points out that some larger companies that are acquiring smaller brands are enabling some innovative emerging brands like Nooma to get noticed by fitness connoisseurs and consumers alike. “Some companies, such as Nooma, have benefited by producing beverages that cater to the emerging health trends of reducing the intake of sugar and artificial ingredients,” she says.

Founded by two hockey-playing brothers Brandon and Jarred, NOOMA is made “with the idea of taking a sports drink and flipping it on its head” with organic and functional ingredients, no added sugar and an ingredient label anyone can understand, its website states. 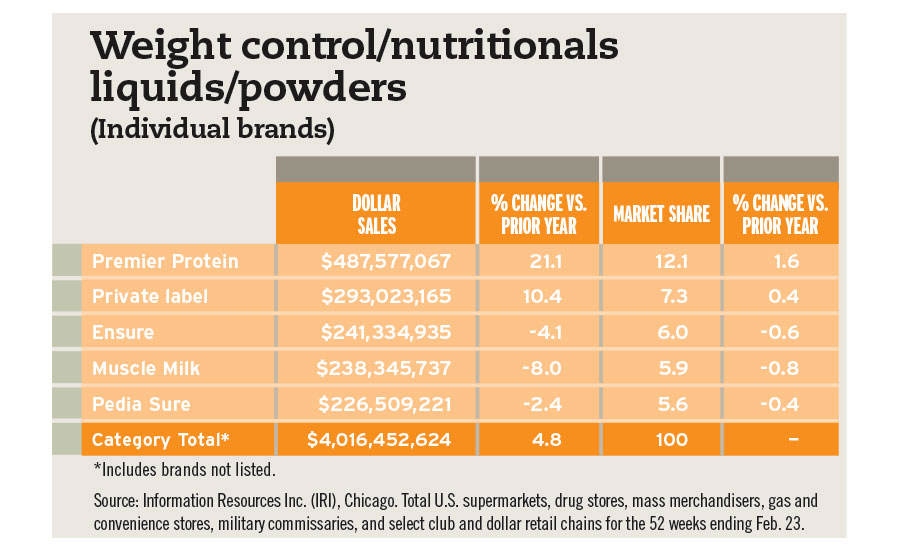 For the 52 weeks ending Feb. 23, the weight control, nutritional liquids and powders category netted sales of more than $4 billion, a 4.8 percent increase over 2019, IRI data states. With 12 percent of market share, Premier Protein is the category’s growth leader with $487 million in sales and double-digit growth of 21 percent. Clocking in at No. 2, private-label brands grew 10.4 percent and saw sales of $293 million.

“Protein drinks had been growing by low double-digits; although in 2019 they mustered only mid single-digit growth,” BMC’s Dilworth says. “Some of the decelerating growth may have to do with an increasing array of options in the protein space, including non-beverages and even non-dairy proteins.”

Performance nutrition shakes, on the other hand, are seeing consistent growth. For the four-week period ending March 21, sales were up 19.6 percent versus a year ago, while the sub-segment captured sales of $653 million for the 52 weeks ending Jan. 25, a 6.7 percent increase, according to Nielsen data. 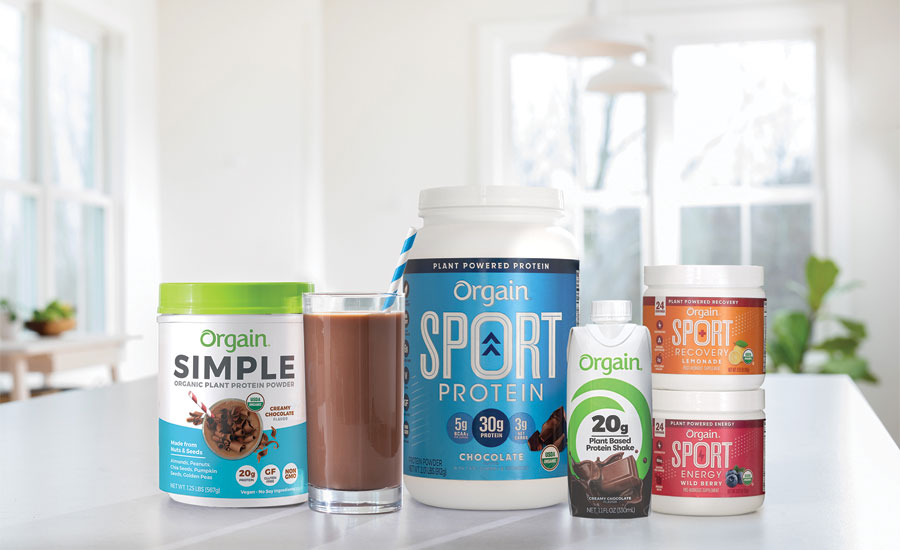 Among its portfolio, Orgain offers a ready-to-drink 20-gram plant-based protein shake made with pea protein and 10 organic fruit and veggie superfoods, a premium line of pre-workout Sport Energy and Recovery Powders, and a new Sport Line set to launch at Whole Foods Market in June. (Image courtesy of Orgain)

Anaheim, Calif.-based Orgain recently launched a RTD 20-gram plant-based protein shake made with  pea protein and 10 organic fruit and veggie superfoods, with only 150 calories and 1 gram of sugar.

On the powder side, Orgain offers its Organic Simple Protein Powder with 20 grams of plant-based protein, and 4 grams of organic fiber from organic peas, peanuts, pumpkin seeds, almonds, and chia. Available in Chocolate Nut and Vanilla Nut, the protein powders are USDA-certified organic with no fillers, binders, preservatives, artificial colors or flavors, the company says.

Mintel’s Franz points out that growth in protein drinks hinges on bringing these drinks into the mainstream by focusing on accessibility and flavor.

“Core Power and Pure Protein have done really well in the RTD sector offering convenient, high-protein drinks,” she says. “Additionally, Pure Protein has diversified its flavor options. Iconic Protein is another up-and-comer with unique flavors and RTD options. Iconic’s drinks are also better-rounded in their nutritional offerings, and the newest innovations on the way (i.e., kids drinks, caffeinated drinks) will really expand their consumer base.”

To stand out in a crowded marketplace, Beck Flavors’ Applications Technologist Adam Berge notes that differentiation is key. “Creativity with additives and complex flavor combinations will be key,” he says. “We have done very interesting flavors like hot honey combining honey with a sriracha type flavor for the sports and energy marketplace.”

Because exercise and going to the gym is no longer just an empty promise, health-conscious consumers will continue to prioritize their search for better-for-your food and drink options with energizing, hydrating and reparative ingredients, according to Mintel’s March “Sports and Performance Drinks US” report.

IBISWorld’s Hiner suggests that sports drinks with fewer artificial additives will increase their ability to compete with water. “Sports drinks are expected to continue to grow in popularity, particularly for more natural energy drinks,” she says.