Not many beverage companies have five co-founders and a “tribe” of friends and family investing a total of $1 million to get a startup up and running, but it’s safe to say that Riff Cold Brewed is no ordinary company. Shortly after its founding in late 2017, the Bend, Ore.-based company was honored as the “Early Stage Company of the Year” by the Oregon Entrepreneurs Network. With five varietals, Riff is crafting cold-brewed coffees while ensuring consumers receive the right amount of caffeine thanks to its Riff Lift Index.

“We were seeing a correlation between the cold brew segment in coffee and the craft beer segment in beer,” explains Paul Evers, co-founder and chief executive officer (CEO) of Riff Cold Brewed. “An impressive amount of innovation (nitro, sparkling, flavor extensions, etc.) and a profound break from the deeply entrenched hot coffee experiences we’re used to.

“Cold brew, as a segment of coffee, was seeing incredible growth of over 80 percent year-over-year, while hot coffee was declining at a rate of 3-4 percent. Those numbers had a striking resemblance to what was happening in beer about a decade prior,” he continues. “We needed to execute quickly to seize the opportunity available in the cold brew category. I knew I needed to build a highly competent team around the brand.” 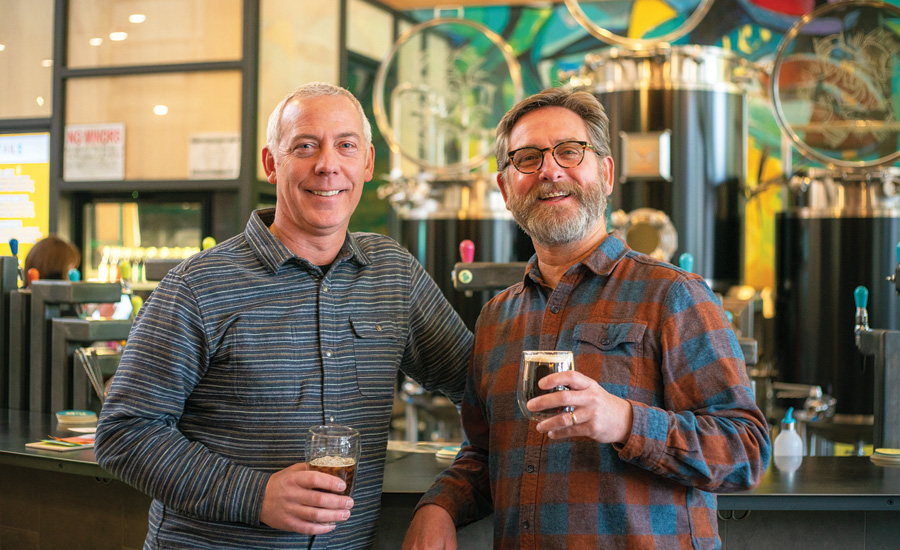 Riff Cold Brewed co-founders include Steve Barham, president, (left), and Paul Evers, chief executive officer, who in less than two years have taken their startup from self-distribution to availability in four states. (Photo by Austin White/courtesy of Riff Cold Brewed)

Not only did Evers bring his experience as co-founder of Crux Fermentation Project, he also delivered marketing prowess from serving as president and chief creative director for TBD Agency, a branding firm that specialized in craft beverage brands including Deschutes Brewery, Odell Brewing, 21st Amendment Brewery and Humm Kombucha.

When assembling the Riff team, Evers notes: “I wanted a combination of craft beverage experience, cold-brewed coffee brewing and packaging expertise, and proven executive leadership from outside of beverage to challenge norms and conventional thinking (that’s where my co-founder Steve Barham comes in — his informal title is director of disruption). I also wanted to build something with my son, Bobby, who I enjoy working with immensely — he’s smart, extremely creative and a real joy to be around.”

As part of his research, he discovered that 70 percent of millennials preferred their coffee cold with a massive migration away from artificial ingredient-laden beverages toward clean label, good-for-you, packaged goods, Evers says.

“Cold Brew and Nitro Cold Brew were the No. 1 and No. 2 most searched terms within the beverage category, according to Google’s Beverage Trends Report in July of 2017,” the CEO says. “Coffee is nature’s original energy drink after all. We began imagining significant opportunities for continued innovation and ways to introduce a new coffee experience to consumers.”

After the fledgling company secured $1 million in angel investments from the “Riff tribe of dedicated supporters,” Riff Cold Brewed officially launched in November 2017 with limited production from a commissary kitchen in Bend, Ore., with capacity of six 20-liter kegs a week, Evers explains.

In less than two years, the company has expanded, employing 35 employees and operating out of a 9,000-square-foot, state-of-the-art production facility in Redmond, Ore., that opened in March 2018 with custom-fabricated brewing equipment.

“Producing our own products was a high priority for us to support optimal quality control, integrity and allow for more innovation. We did not want to outsource our production to a co-packer in the critical early stages of the company,” Evers explains. “For capital efficiency, we handled much of the build-out improvements ourselves and procured used packaging equipment from various sources.”

As a way to reach more consumers and remain nimble, Riff Cold Brewed launched its cold-brewed coffees in three formats: 10.5-ounce glass bottles; a 96-ounce bag-in-box ideal for use in at-home refrigerators; and 20-liter kegs, which provide high velocity in the workplace, Evers says.

“Many of today’s employers — particularly in tech, creative services, and more progressive industries — are offering cold brew, kombucha and even beer on tap,” he explains. “Kegs also provide a terrific opportunity for trial at on-premise locations such as pubs and restaurants.”

Riff Cold Brewed is available in five varietals: Off The Cuff, an artisanal cold-brewed coffee with notes of dark chocolate and toffee; Paint The Town, which contains notes of bing cherry and blueberries; Arm In Arm, which has notes of red berry and stonefruit; Southpaw, which has notes of cocoa nibs, nougat and contains half the caffeine of the other varietals; and its newest varietal: Doubletake, a decaf cold brew coffee.

“We are big proponents of consumer empowerment and developed what we call the Riff Lift Index built on a scale from zero to four with a four representing 300mg of caffeine and a zero representing a decaf,” Evers says. “The Riff Lift Index can be found on all of our labels, empowering consumers to control their caffeine intake. Off The Cuff, Arm In Arm and Paint The Town are all fours on the Riff Lift Index. Southpaw is a two, and a new product called Doubletake is a zero. It’s an amazingly delicious decaf cold brew for those who love the flavor and experience of a cold brew but prefer to not have the caffeine.”

“Our nitro cold-brew coffee, which Nate Armbrust helped pioneer at Stumptown in 2013, provides an incredibly smooth drinking experience with a silky smooth mouthfeel,” he continues. “Cold brewing, being a passive and cold process, avoids extracting up to 70 percent of the acidic and bitterness compounds found in hot brewing processes, allowing the flavor notes to shine without the need to add any additional ingredients.”

After self-distributing for about five months, Riff Cold Brewed began working with Point Blank Distributing to cover the brand’s home state of Oregon. The coffees also are available in Southwest Washington and Northern California. In April, the company inked a distribution deal with Hensley Beverage Co., which launched statewide distribution in Arizona including all of AJ’s Fine Foods, a premium natural grocer.

Evers also reports a “strong favorable response” to its products at Natural Products Expo West, which could ramp up distribution at national chains and regional natural grocers.

The CEO affirms that the company will continue “riffing” and elevating the cold-brew experience for consumers by introducing new varietals to its lineup. This month, Riff introduced an Alter Ego Sparkling Coffeefruit Tea, a shelf-stable tea with a 180-day shelf life.

Evers and his leadership team are “bullish” about becoming a national brand within the next two to three years. “On a more important level, we want to be known for revolutionizing the experiences we share around coffee and changing the way people think about coffee itself in fun and exciting ways,” he says. BI

Beverage swap-out trend likely to continue this Fourth of July