A year after becoming the first No. 1 seed to lose to a 16 seed in NCAA’s men’s college basketball tournament, the Virginia Cavaliers had a lot to prove when they entered the 2019 event. Once again a No. 1 seed, the college athletes faced tough competition in its post-season performance, including two overtime games, but eventually emerged as national champions. Much like the 2019 Cavaliers’ men’s basketball team, the sports drink market is facing stiff competition from other beverage categories and remains to be seen whether it will make its comeback victory.

“Sports drinks faced a sudden decline in sales in 2017 after achieving strong growth in previous years,” states Chicago-based Euromonitor International’s March report titled “Sports Drinks in the US.” “The story of sports drinks is similar to that of declining carbonates: the popular consensus that has decreased soda sales has reached sports drinks. Sugar content has become a major concern for consumers, and in view of the persistent decline of carbonates it seems unlikely to go away.”

Karen Formanski, health and nutrition analyst for Chicago-based Mintel, also notes the challenges that sports drinks experienced in 2016-2017, but highlights that dollar sales did showcase a modest upward trend in 2017-2018. However, she cautions that growth for the category is projected to be subtle.

“Consumers’ desire for general health and wellness bodes well for sports, nutrition and performance drinks; but due in part to increased cross-category competition, growth across these segments is likely to remain slow,” Formanski says.

Formanski further elaborates about the impact that the growing functional beverage market is having on the sports drink category. “Consumers are seeking functionality from beverages in a growing number of categories, with functional water, coffee and tea invading the space historically ruled by more traditional sports, nutrition and performance drinks,” she says. “This will continue to put pressure on the sports, performance and nutrition drinks market.”

Gary Hemphill, managing director of research for New York-based Beverage Marketing Corporation, also notes that today’s shoppers are seeking beverages that extend before refreshment, but thinks the product attributes of sports and protein drinks resonate with consumers and will bode well for the markets.

“Both sports and protein drinks experienced modest growth in 2018. Both categories are well positioned for today’s consumers,” he says. “The sports drinks category is larger and more established.”

Although Hemphill thinks the sports drink market will continue to show growth, he notes that the competition might be coming from within its own category — potentially shaking up the two-brand dominance held by Purchase, N.Y.-based PepsiCo’s Gatorade and Atlanta-based The Coca-Cola Co.’s Powerade.

“The heat is on and the marketplace has grown more competitive,” Hemphill says. “While Gatorade and Powerade remain the dominant brands, BODYARMOR is making inroads and resonating with people.”

Mintel’s Formanski echoes similar sentiments. “While not yet experiencing sales losses, the top sports drink players have seen a slight decline in market share from 2017-18,” she says. “The sports drink segment is extremely competitive, with new products targeting very specific consumers and occasions.”

Cautioning about the struggles that the sports drink category experienced in 2017, Euromonitor’s report points to the need for more inventive sport drink solutions — also highlighting the impact of BODYARMOR.

“Sports drinks sales are likely to continue to drop, led by the two most popular brands, Gatorade and Powerade,” the report says. “Innovation is needed to invigorate sports drinks sales. The strongest proof of this comes from the success of BODYARMOR, which has achieved immense success and growth while offering a healthier, less sugar-laden version of a sports drink.”

In 2018, Whitestone, N.Y.-based B.A. Sports Nutrition LLC, the parent company of BODYARMOR, announced that the company and The Coca-Cola Co. entered into a definitive agreement through which The Coca-Cola Co. acquired a minority ownership stake in BODYARMOR. Through the agreement, BODYARMOR has gained access to the Coca-Cola bottling system, enabling the brand to accelerate its growth to meet consumer demand for its premium line of sports performance and hydration drinks, it says.

The initial investment is structured to create value for both companies and allow The Coca-Cola Co. to increase its ownership stake in the future under defined terms, the company says. The BODYARMOR investment now is part of the Coca-Cola North America Venturing and Emerging Brands (VEB) investment portfolio. The brand continues to operate independently under the leadership of Co-Founder and Chairman Mike Repole and his BODYARMOR management team. Financial terms of the agreement were not disclosed.

“In a fast-moving and dynamic industry, and during a time of unprecedented change at Coca-Cola, we’re challenging the status quo and bringing innovative, boundary-less thinking to our strategic relationships to ensure we are offering the products consumers want,” said Coca-Cola North America President Jim Dinkins, in a statement at the time of the announcement. “BODYARMOR is one of the fastest growing beverage trademarks in America and competes in exciting categories. I have no doubt it will prove to be a strong offering to our system alongside our already powerful hydration portfolio as we accelerate our position as a total beverage company.”

Repole added: “BODYARMOR is revolutionizing the beverage industry by providing the hydration that more and more of today’s athletes want and need. We are confident that this agreement gives us the best opportunity to significantly accelerate our mission to make BODYARMOR the world’s best premium sports performance and hydration brand. This is thanks to the strength and scale of Coca-Cola’s newly refranchised and energized bottling system in North America, as well as longer-term opportunities for international growth.”

Although many associate sports drinks with athletic activities, research shows that consumers increasingly are utilizing these products during very different drinking occasions.

“Despite the nomenclature and legacy association of sports drinks with specific athletic activities, more consumers note drinking beverages from this segment while doing chores such as yard work (35 percent) or relaxing at home (34 percent) than they do during a workout or while recovering from sports,” Mintel’s Formanski says. 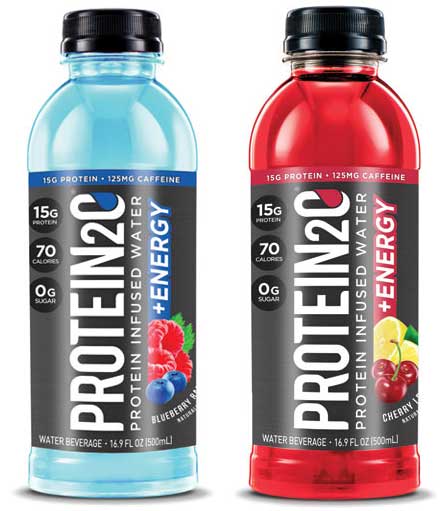 Consumers indicated the amount of protein content in a beverage impacts their purchase decision, Mintel’s Karen Formanski says. The Protein2o Plus Energy line boasts 15 grams of protein in each bottle. (Image courtesy of Protein2o)

Among consumers who do drink sports beverages when working out or playing sports, after-game consumption outperformed in-game.

“We have consumer data on consumption occasions only for the sports drinks segment,” Formanski says. “Amongst consumers who had purchased a sports drink in the past three months, 31 percent noted workout recovery as an occasion for drinking sports drinks, while 26 percent said they had consumed a sports drink during a workout.”

The after workout focus has commonly been associated with the emerging protein drinks market, which increasingly is becoming more mainstream, experts note.

“Protein drinks are a niche category that have begun to move beyond the health food channel,” BMC’s Hemphill says. “The success of Muscle Milk with its catchy name and backed by the power of the Pepsi distribution system has helped to mainstream the overall category.”

Mintel’s Formanski adds that the amount of protein content is intriguing consumers to take a look at the beverage category.

“Consumers of drinks in this category rate high protein content as the biggest motivator for purchasing,” she says. “Some of the most successful brands use marketing focused on general healthy, active living, with an emphasis on the importance of protein that is in tune with consumer preferences.”

Elk Grove Village, Ill.-based Protein2o launched its Plus Energy line, which boasts 15 grams of protein in combination with 125 mg of caffeine. Protein2o Plus Energy is made with 100 percent whey protein isolate with caffeine derived from green coffee beans, the company says.

The protein drink space also is seeing an emergence of brands that are fortified plant-based proteins. 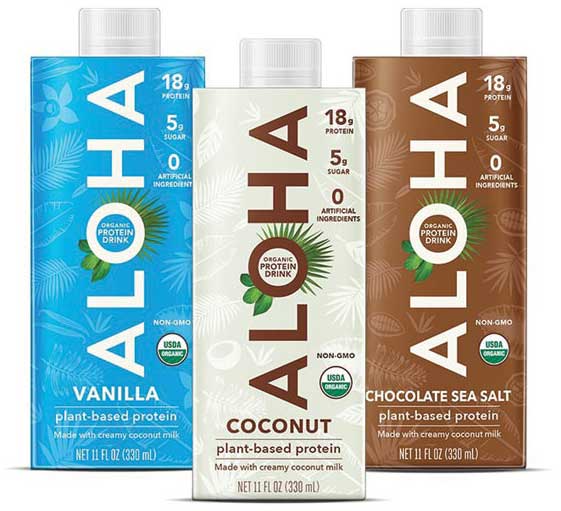 An increasing number of protein drinks featuring plant-based ingredients are hitting the market. ALOHA Protein Drinks provide 18 grams of protein with only 5 grams of coconut sugar. (Image courtesy of ALOHA)

For example, New York-based ALOHA expanded its organic, plant-based expertise beyond protein powder and bars with its recent addition of protein drinks. Available in Chocolate Sea Salt, Coconut and Vanilla, ALOHA Protein Drinks provide 18 grams of protein with only 5 grams of coconut sugar. ALOHA's protein drink uses a proprietary blend of pea and brown rice proteins while containing a blend of electrolytes to replenish nutrients, prebiotics for improved gut health and MCT oil derived from coconuts for natural energy and endurance, the company says.

Plant-based proteins is not the only attribute gaining steam in the sports and protein drinks segments. Organic and natural positioning will play a large role in the future of these markets, experts note.

“The majority of consumers aged 18-54 feel that nutrition and performance drinks contain too many artificial ingredients, and major players will need to adapt,” Mintel’s Formanski says. “Emerging brands with all-natural ingredient profiles, along with enhanced waters that are inherently free of artificial ingredients, will continue to put pressure on sales of drinks in this category with more traditional formulations.”

Euromonitor’s report details that despite sugar content, sports drinks historical perception as a healthy beverage has benefited the category. However, new entrants are challenging that perception and placing a greater focus on today’s version of “healthy.”

“Sports drinks with added vitamins, nutrients, and minerals that can provide specific health benefits are gaining traction in the U.S.,” it states. “Brands such as BODYARMOR, which have plant-based ingredients are also quickly advancing in the ranks. BODYARMOR is the only major brand to sustain positive sales growth. V8 has also entered the healthy hydration playing field, with a vegetable and fruit juice-based isotonic drink. V8 Hydrate exemplifies the guarded shift toward the natural and healthy. More and more of these products are expected to be seen hitting the shelves, especially as bigger producers embrace the health trends started by smaller brands.” BI