This website requires certain cookies to work and uses other cookies to help you have the best experience. By visiting this website, certain cookies have already been set, which you may delete and block. By closing this message or continuing to use our site, you agree to the use of cookies. Visit our updated privacy and cookie policy to learn more.
Home » Beverage brands continusously roll out new campaigns to coincide with sports, holidays
MarketingCommentaryAlternative Drinks

Direct Wines Inc. launched its Wine Lovers’ Advent Calendar for wine and Christmas enthusiasts. Each of the calendar’s 24 windows contains a quarter bottle (187-ml), including top grower Champagne with two gold medals, fine Bordeaux from 2015 vintage estate Rioja, barrel-aged Chardonnay and more, the company says. Sourced by Direct Wines in collaboration with licensed retailers, the Wine Lovers’ Advent Calendar is available for purchase online for a suggested retail price of $129.99. Free shipping is available to 33 states in the United States.

A game and a drink

New Amsterdam Vodka and the NHL announced a multiyear U.S. partnership naming New Amsterdam Vodka the Official Vodka of the NHL. New Amsterdam Vodka will be featured in NHL programming throughout the regular season and the Stanley Cup Playoffs, as well as during the league’s premier events, including the NHL Winter Classic, NHL Stadium Series and NHL All-Star Game, the company says.

REBBL launched a new integrated marketing campaign titled What’s Your Elixir? that connects consumers to the transformational power of super herbs and adaptogens, the company says. As the brand continues to expand into targeted conventional retail stores across the country, the new campaign aims to reach a wider audience, allow REBBL to get to know its REBBL community on a deeper level and help consumers better understand how super herbs benefit the body, it adds. The campaign features multiple waves. The first wave focused on the taste and packaging design of each of the company’s 14 offerings. The second wave introduced consumers to the functional benefits of REBBL’s products. Lastly, as the campaign progresses, REBBL’s messaging will strive to educate consumers about the larger impact story that is at the company’s core, it says.

(Image courtesy of The RumChata Foundation) 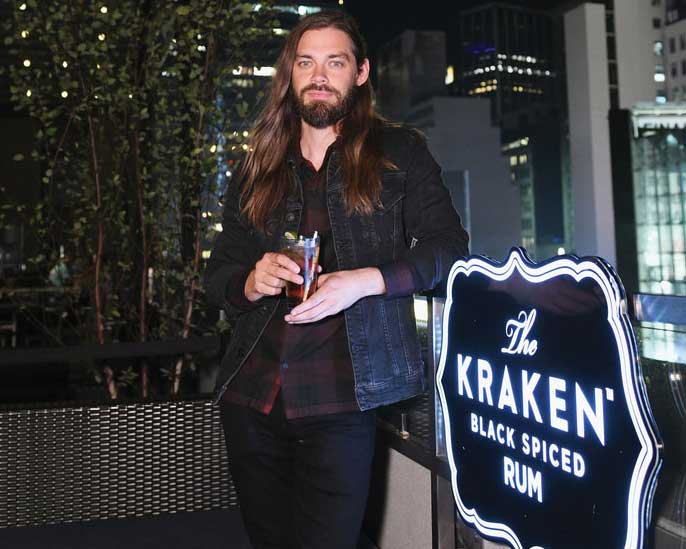 (Image courtesy of The Kraken Rum)

For the season nine premiere of the hit AMC TV show “The Walking Dead,” actor Tom Payne, who plays “Jesus,” joined fans for a watch party sponsored by Kraken Rum. The premiere party took place at the VERSA in New York City following the 2018 New York Comic Con. “It was great to spend some time with fans and the Kraken watching the season nine premiere of ‘The Walking Dead’ under the shadow of the Empire State Building,” Payne said in a statement. “It’s a wild ride being on the show and now with the Kraken campaign I get a chance to connect with more fans. There’s a lot to come this season — I can’t reveal too much. The million dollar NDA I signed might be the only thing scarier than my battle with the Kraken.”