When it comes to consumer penetration, carbonated soft drinks (CSDs) still are a behemoth within the U.S. beverage market. In its April 2017 report titled “Carbonated Soft Drinks – US,” Chicago-based Mintel notes that the category has a penetration of about 90 percent. Yet, with declining sales, analysts suggest that more innovation is needed to help the mature beverage category.

“In particular, suppliers will need to meet the demand for more-healthful options, varied flavors and added benefits,” the report states. “Effective engagement with iGeneration and millennials, which are increasingly ethnically diverse populations, will be central to future sales growth.”

Read the report from other years

The reason for the urgency to innovate the CSD market has been documented by the category’s multiple years of declines.

“Carbonates total value sales stagnated in 2017, indicating a worsening perception of carbonated soft drinks overall,” she says. “While there were some bright spots from ginger ale and tonic water, the overwhelming majority of the market recorded continuing lows.”

Krol adds that 2017 recorded the lowest decline for CSDs since 2013, suggesting more challenges await the category.

“As cola carbonates continue to decline at the usual rate, the contributing factor to this greater decline can be attributed to non-cola carbonates, as this is the first year they have posted negative growth rates,” she says. “The health-and-wellness movement has contributed to a lot of the decline in low-calorie CSDs, but 2017 has shown that full-calorie carbonates are not immune.”

With regular and low-calorie CSDs showing declines in 2017, Krol notes that practices that previously helped brand owners stem the tide might not be as effective this time around.

Cola flavors are No. 1 in packaged and fountain, regular and diet carbonated soft drinks, according to data from the Beverage Marketing Corporation (BMC).

“Regular CSDs continued to decrease in 2017, but not at the rate at which low-calorie CSDs were declining,” she says. “Low-calorie CSDs have been free-falling in both value and volume for the last several years. The interesting trend is that value sales of regular CSD are beginning to slip, potentially signaling that the current effect of value-adding strategies in carbonates may be waning.”

Increased competition also is impacting the CSD market, according to Mintel’s report.The market research firm highlights that despite the category’s high penetration, many consumers are drinking a wide range of beverages.

“This includes many that compete with CSDs by offering carbonation, caffeine or natural flavors,” the report states. “In a context where many consumers are concerned with weight gain and overall health, the high-sugar content in traditional CSDs and artificial sweeteners in diet CSDs are leading about a fifth of consumers to cut down on their soda intake, and trade these out with other options. The sheer number and range of competitive beverages, including many associated with greater health benefits, poses a prime challenge to the CSD market.”

Another concern for the category is that flavored CSDs, which are faring better than other CSD segments, have struggled as of late. However, not all flavors have experienced the same fate.

“As most other sugary beverages take a hit from public and legislative outcries over sugar, orange carbonates are an interesting anomaly,” Euromonitor’s Krol says. “They have experienced modest growth while all other categories decline. The unique flavor profile as well as a faithful fan base can be attributed as reasons behind this category’s success.”

Investing in the future

Although the CSD market is facing a battle on many fronts, analysts note that manufacturers are investing in various ways to fulfill the needs and demands of today’s beverage consumer. 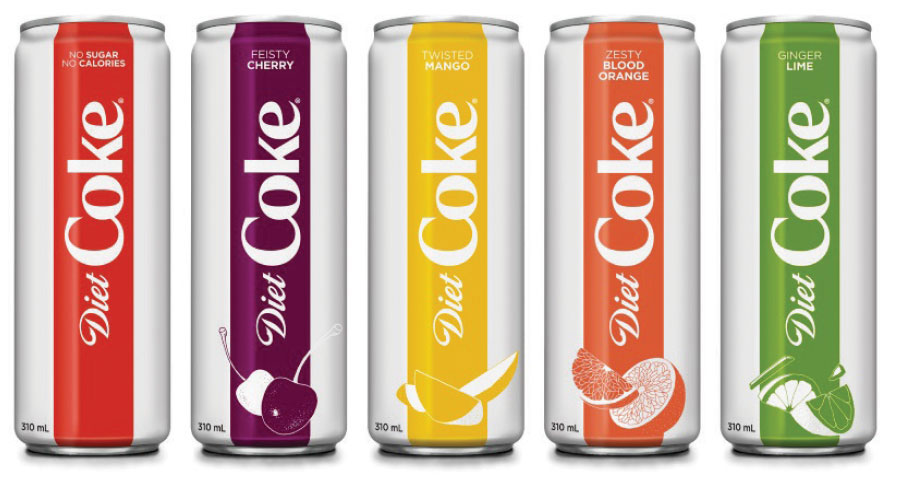 “In the past few years, Coca-Cola and Pepsi have begun using various strategies to maintain their profit margins in the face of burgeoning public concerns over sugar content,” Krol says. “Smaller pack sizes were one remedy for falling volume sales, while expanding portfolios to include a diversity of premium products is another. Pepsi made a more deliberate attempt at expanding into different categories such as juices and water, but they widely cited this decision as the reason behind the decline of their staple CSD products.”

However, smaller packaging and new product development in competing categories is not the only way that major players such as Atlanta-based The Coca-Cola Co. and PepsiCo Inc., Purchase, N.Y., are addressing CSD declines.

“Stevia has been interrupting the health-and-wellness space, offering a zero-calorie product, which is both natural and sweet,” Krol says. “Overall, high-intensity sweeteners have experienced a large growth over the last couple of years, offering consumers an alternative to aspartame-like artificial sweeteners that is both sweet and beneficial to them. Pepsi and Coca-Cola have been busy performing [research and development] to develop a stevia-sweetened carbonate that appeals to the widest variety of consumer tasting palates as the current use of stevia/erythritol is described by some consumers as ‘bitter.’”

Noting the poor performance seen across the diet CSD segment, BMC’s Hemphill points out that emerging sweetener solutions will be vital for the category’s future.

“Consumers appear dissatisfied with the current crop of diet sweeteners and are consuming less of the products and, in some cases, moving out of the category entirely,” he says. “We believe companies are responding with some taste improvements with diet sweeteners that could begin to improve the performance of the category.”

According to Mintel’s report, consumers are showing an interest in innovative products within CSDs, particularly those that are positioned as healthier.

“The most widely cited innovation sought by consumers is ‘healthy options,’ followed by ‘natural ingredients,’” the report states. “This suggests ongoing challenges, but also critical areas of opportunity.”

As CSD manufacturers explore sweetener solutions, lower-calorie, natural and additive-free formulations, it will be crucial for brand owners to break consumers’ habits and expand their taste profiles, Mintel states.

“To introduce healthful new sodas, suppliers may consider free samples and promotions, or even variety packs, that give consumers the opportunity to mix and match traditional formulations with the newer ones,” the report states.

Beyond packaging and formulation innovations, analysts highlight the importance of engaging with consumers who offer growth potential to the CSD category.

Compared with other demographics, the iGeneration and millennials over index when it comes to usage of the full range of CSDs and also are more likely to report increasing their usage in the past year, according to Mintel’s report.

“Their enthusiasm for the category embraces regular and diet CSDs, as well as natural and craft sodas,” the report states. “Millennials, in particular, include a large share of parents of children under 18, who also show high levels of participation in terms of the range of CSDs they consume and the variety of occasions when they do so.”

Additionally, Hispanic multicultural consumers could have a positive impact on the category. Among millennials, the Hispanic demographic accounts for 21 percent, while the iGeneration has 24 percent of its base comprised of those within the Hispanic population, according to Mintel’s report.

“Hispanics are enthusiastic CSD users and Hispanic millennials show very strong engagement,” the report states. “They stand out as among the most likely to report consuming more CSDs relative to a year ago. This holds true for the full range of CSDs. They also consume CSDs on a wide range of occasions, including meals, snacks, and celebrations and at restaurants.

“Demographic trends showing growth among younger generations, including a growing share of Hispanics, bodes well for the CSD market,” the report continues. “Product development and effective outreach to this population is a key opportunity for CSD suppliers.”

Masters of their craft

Although beverage alcohol markets have seen the growing presence of craft brands, so, too, has the CSD market. Although craft is leaving a positive stamp on the CSD category, its impact remains minimal.

“Craft soda has grown from a small base but [it] hasn’t had the same impact on the CSD category that it has in the beer category,” BMC’s Hemphill explains.

“As craft sodas begin to evolve and gain popularity, authentic-flavored carbonates may have the power to reach other untraditional demographics, leading to higher gains,” she says. “The example of Mexi-Coke (or Mexican-made Coca-Cola) is a perfect example of a successful prototype. Consumers are beginning to reject artificially made products for what they deem as organic, wholesome carbonates that are perfect for indulgence. In addition, unique flavors may expand the carbonates portfolio to intrigue new consumers to join the current indulgers.”

Krol also thinks that the craft soda segment could pose potential for the CSD market.

“As craft sodas begin to evolve and gain popularity, orange and other tropical flavored carbonates may have the power to reach other untraditional demographics, leading to higher gains,” she says.

Yet, Krol does not think that is the limit to where CSD-makers can take the category. “Another strategy that might prove successful is if the major beverage companies can take advantage of their adequately webbed AI structures around the country; successful application may result in interesting flavor innovation to be seen in the coming years, which is sculpted around the country’s consuming habits,” she says. BI