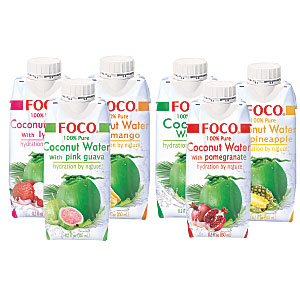 In the past year, Life Up LLC’s Foco 100% Pure Coconut Water line has added 10 distributors, secured distribution in major supermarket chains and more than doubled its sales, according to Contessa Foconut Donna Bimbo, chief executive officer of the Brooklyn, N.Y.-based company. She says the secret to the brand’s growth is two-fold: a strong brand base and aggressive distribution efforts.

This expertise with coconuts and reputation for quality helped boost the brand’s line of Foco 100% Pure Coconut Waters, which launched in late 2012 and early 2013. “It was a natural progression … to get into the more natural coconut water, because [Vasinee Food Corp., Life Up LLC’s Brooklyn-based parent company, is a leader] in making coconut products,” she says. “The advantage of our coconut water is, because we’re so great at doing coconut products, [the line extension] just rapidly fell into place.”

Like its original juice product, Foco 100% Pure Coconut Waters are made from baby green aroma coconuts sourced from Southeast Asia, Bimbo says. These coconuts are small, floral, sweet and, when harvested at a young age, contain a high amount of water, she says. Like the coconuts, the coconut water inside is sweet and offers a “gorgeous bouquet” of flavor,  she adds.

To control the quality of its coconut water products, Thai Agri Foods Public Co. Ltd., the Samutprakarn, Thailand-maker of the coconut water, owns its own farms and runs its own production facilities in Thailand and Vietnam to produce its 1-liter and 500-ml products, respectively.  “The beauty of that is we control the quality from A to Z,” Bimbo says. The company uses a natural approach, allowing the coconuts to be fertilized naturally by air, picking them at a certain date to take advantage of their peak of sweetness, and then packaging the coconut water without added sweeteners or preservatives, she says. In its natural state, the coconut water acts as a natural hydrator and offers five essential electrolytes — potassium, sodium, calcium, phosphorus and magnesium — as well as minerals, antioxidants and phytonutrients, she adds.

The brand also uses ultra-high-temperature (UHT) processing to preserve the product and its nutrients. “What that does is it heats the product up very quickly [to kill any microbes] and cools it down very quickly, so we’re not depleting any of the nutrients in the product while pasteurizing it,” Bimbo explains. The water then is packaged in aseptic cartons from Tetra Pak Inc., Denton, Texas, which help to preserve the product, give it a 15-month shelf life, and offer lower shipping costs because of its lightweight design, she says.

Beyond controlling the quality and nutrients of the coconuts and the product’s shelf life, Foco also focuses on the quality of its fruit flavors in the flavored versions of its coconut water. After the brand launched its Original coconut water in late 2012, it quickly followed up with five flavored coconut waters — Mango, Lychee, Pink Guava, Pineapple and Pomegranate — in January 2013.

“We did such a wonderful job with our flavors, and that’s because we use real fruit,” Bimbo says. “We crush it, we concentrate it, and we add it to the coconut. It’s like taking a bite into that fruit.”

Although Foco offers a variety of tropical flavors, the brand’s Original variety is its best seller, Bimbo says. “People know when they go on holiday, they crack open a coconut and they drink from it, so I think people are very, very familiar with that,” she says. However, she notes that the flavored varieties help consumers who are not coconut water connoisseurs approach the category and consume healthy beverages.

Of the flavored coconut waters, Pineapple has been the most popular because of its ubiquity, but Lychee quickly is rising through the ranks and now is running neck-and-neck with Pineapple, Bimbo notes. Lychee is popular in the Asian market, but other consumers are interested in it because of its novelty and tropical appeal, she explains. Mango now is following in fourth, trailed by Pink Guava and Pomegranate, which also are climbing the ranks because of their perceived health benefits.

However, the rankings of all of these could be challenged by the addition of two or three new flavors this March. Although Bimbo can’t reveal the details just yet, she says, “They are really going to be very exciting.”

Line additions are not the only innovations the company has explored. In mid-November, the brand released its newest packaging size: 330-ml cartons. The company added another production line to its Vietnam facility to produce the 330-ml cartons for each of its six varieties.

The 330-ml packages are available in many of the supermarkets and independent retailers that carry Foco products and have a suggested retail price between $1.49 and $1.69. By comparison the brand’s 500-ml package is priced between $1.99 and $2.49, and the 1-liter package retails between $3.99 and $4.99.

Currently, Foco 100% Pure Coconut Water is available in the New England area; New York; New Jersey; Maryland; Washington, D.C.; Virginia; Georgia; North Carolina; South Carolina; Florida; and California, but the brand is working to increase distribution. “That’s the whole name of the game: … distribution,” Bimbo says. “Every day we look for new distributors, and we just grow as we add distributors on.”

The brand uses direct-store-delivery repre-sentatives who travel up and down the street into mom-and-pop stores, independent retailers and supermarket chains to promote the product, Bimbo says. Another set of brokers helps to distribute the product through the natural channel, she adds.

Outside of traditional distribution, the brand also works to promote awareness through its presence at tradeshows, health and fitness event sponsorships, and tasting events for consumers. “We have a team of demo people in every state where we have distribution … because once people try the product, they will continue to buy the product,” Bimbo says.

With this trifecta of quality product, delicious flavors and strong distribution efforts, Bimbo says the Foco brand is poised for more growth. “I just think that we’ve been flying low under the radar for the past year, [but] I think that people are really going to be surprised at how well we are doing and how we’re growing,” she says. “I just think the name Foco is going to be on a lot of people’s tongues, because we have a fabulous, great-tasting product and a good-for-you product, and that’s what we’re here for: to provide good-for-you products to everyone out there with a healthy lifestyle or who wants to have a healthy lifestyle.”