Lemonade, the longtime star of summertime beverage consumption, is leveraging its appeal to help other beverages shine.

“Given today’s inflationary climate, consumers will likely reach for flavor profiles they know they will enjoy,” explains Anna Fabbri, food and drink analyst at Chicago-based Mintel. The comfort and familiarity of lemonade’s flavor allow consumers to explore new beverage products or categories without taking much risk in terms of taste.

The infusion of lemonade and lemonade flavors into other beverages also has helped expand exposure to the lemonade segment overall. Lemonade sales for the 52 weeks ending May 15 in total U.S. multi-outlets, show that single-serve bottled lemonade increased 6.7% while refrigerated lemonades were up 10.6%, according to data from Chicago-based Information Resources Inc. (IRI).

Similarly, lemonade is proving to be a good vehicle for introducing consumers to new and unfamiliar flavors. According to Mintel’s 2022 report “Trending Flavors and Ingredients in Non-Alcoholic Beverages – US,” about 40% of consumers are encouraged to try a new flavor if it is offered in a beverage they already like. This gives beverage-makers opportunities to play with new and even familiar flavor combinations, like rose, elderflower, lilac, peach and watermelon lemonades, Mintel says.

Unique flavor combinations could add the differentiation beverage-makers need to gain shelf space and market share within the category. Lemonade-flavored beverage launches grew nearly 25% between 2019 and 2021, according to data from the Mintel Global New Products Database, so consumers have plenty of seemingly similar options. 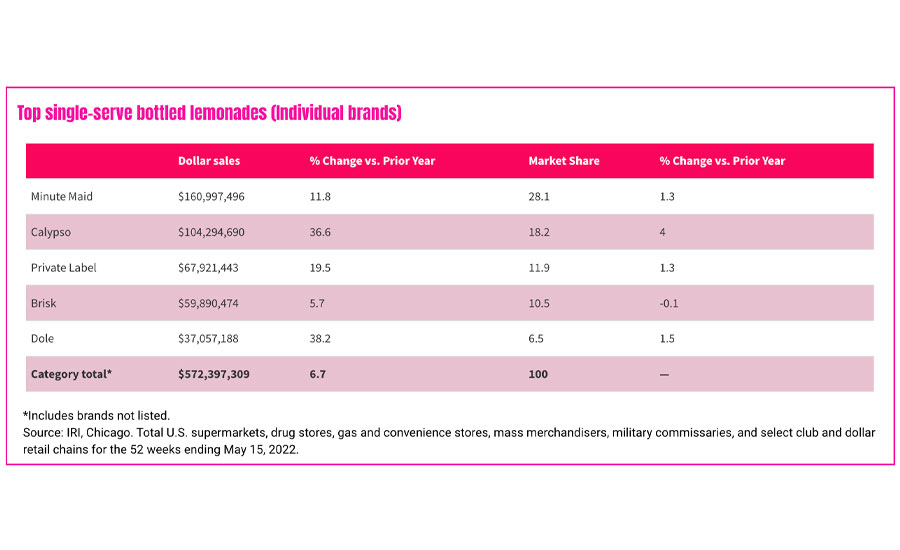 In May, Sunwink launched a Digestion Lemon Tonic. The beverage uses dandelion, lemon balm and chicory to stimulate digestion, soothe the digestive track, and support overall gut health and digestion. The San Francisco-based company says the digestive health beverage tastes like a sparkling lemonade. This new release is an extension of the lemonade-inspired Digestion Lemonade powdered beverage enhancer, which was launched in early 2021. Sunwink’s Digestion Lemonade combines superfoods chicory root, amla and dandelion to help with debloating. When added to water, the powdered beverage enhancer tastes like a juicy lemonade with a hint of pineapple, the company says.

Lemonade-kombucha mashups also are trending, perhaps because the sweet and tart flavor of lemonade works well to mask the sour flavor of kombucha, Costello adds. Los Angeles-based Health-Ade  added a Berry Lemonade flavor to its kombucha lineup earlier this year. This summer-inspired brew is flavored with organic, cold-pressed blueberries and raspberries and infused with lemonade.

Even outside of the functional beverages category, lemonade adds an aspect of health to the other beverage categories noted above. At the same time, some of these combinations also have enhanced lemonade’s health halo, experts note.

“Recent lemonade hybrid trends, such as lemonade blended with sparkling water or tea, offer hydration at a lower calorie and sugar content than lemonade alone, allowing consumers to treat themselves to a flavored beverage without derailing their wellness goals,” Mintel’s Fabbri says. 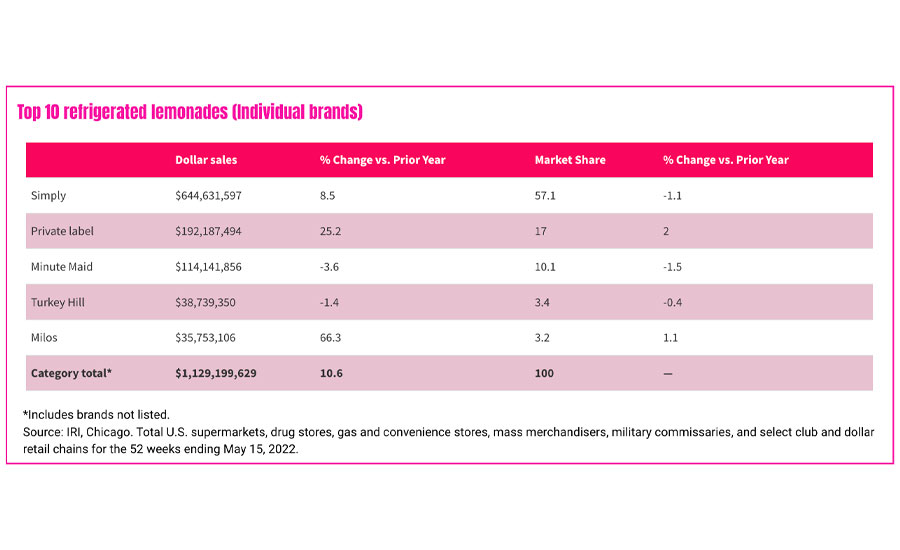 Lemonade’s sugar content has long been a health concern for some consumers. Beverage-makers are expected to experiment with different low- and no-sugar options to find that sweet spot for consumers. Many of the sugar-free lemonade launches from the past few years have used monk fruit as a sweetener, Fabbri notes.

For example, the new Swoon Matcha Lemonade, created by New York-based Swoon and Beverly Hills, Calif.-based Chamberlain Coffee — which provides the matcha — is sweetened with monk fruit instead of sugar. Still, the ingredient’s use is relatively niche — as least as far as consumers are aware. Only one in five consumers says they have tried monk fruit, according to Mintel.

As healthier lemonade options are formulated, lemonade will undoubtedly extend its role in the functional beverage space as well as in other beverage categories to bring both the health benefits of citrus and the familiar, appealing taste of lemonade to new products ready for trial.