For NFL coaches, the prep work for the next game begins right away. In a 2018 “Freakonomics” podcast episode titled “How to Stop Being a Loser,” Kyle Shanahan, head coach of the San Francisco 49ers, noted that during the season he’ll get to the facility at 5:30 a.m. every day. Mondays he leaves around 11 p.m. and that’s an early night compared with the midnight clock out that he typically does on Tuesdays and Wednesdays. The long hours and prep are necessary to be a winning coach in the NFL, he alluded. Although import beer brands are not watching game tapes on other beer segments, experts note the segment should be prepping because consumer preferences are constantly shifting.

For the 52 weeks ending Dec. 26, 2021, in total U.S. multi-outlets based on data from Chicago-based Information Resources Inc. (IRI), import beer dollar sales topped $9.2 billion, a 4.8% increase, while case sales were up 1.5% during that time. Experts recognize that import beer has fared well the past few years. 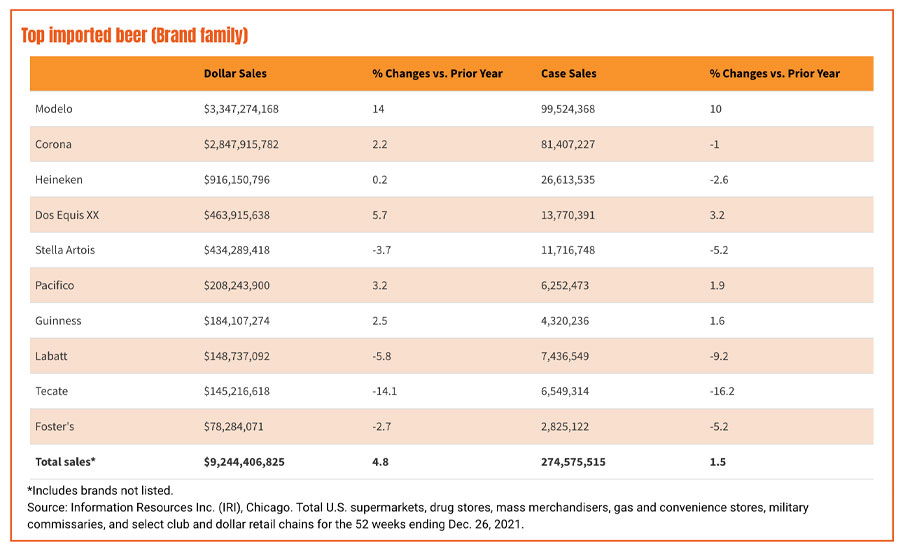 “Imports within the domestic beer market have been increasing, peaking as a share of domestic demand in 2020,” she says. “Import penetration into the industry is expected to fall slightly in 2022, but will continue to make up nearly 20% of domestic demand.”

The depreciation of the U.S. dollar compared with other major currencies also is impacting the imported beer market.

“Imported beers have benefited from a strong U.S. dollar in recent years, especially in 2020, which has made imported goods less expensive for domestic consumers compared to U.S. goods,” Wood explains. “However, this trend began to reverse in 2021 as the value of the U.S. dollar began to depreciate. This depreciation is expected to continue over the next few years, which may potentially stifle imported beer brands.”

Despite projected challenges for the imported beer market, analysts note that premium positioning of the segment has helped promote its status with U.S. consumers.

“Positively the market is impacted by consumers seeking premium beer offerings and continue strength of the Hispanic consumer in Mexican imports,” Sudano says.

Brands also are targeting trends permeating throughout the broader beverage market, including health and wellness.

“After taste test success and sales momentum in key markets, we’re thrilled to expand availability of Tecate ALTA to new markets,” said Belen Pamukoff, brand director for Tecate, in statement at the time of the expansion. “Two out of three of our core Mexican-American drinkers claim that ALTA is ‘more interesting’ than the brand they are currently drinking, and we’re excited to offer our consumers a high-quality, ultra-premium option that speaks to their Mexican-American essence and identity.”

As the leading region for imports, Mexican beer continues to dominate the market, experts note.

IBISWorld’s Wood notes that following Mexico, the next leading locales for importing beer to the United States are the Netherlands, Belgium and Ireland.

“Imported beers have benefited from a strong U.S. dollar in recent years, especially in 2020, which has made imported goods less expensive for domestic consumers compared to U.S. goods. However, this trend began to reverse in 2021 as the value of the U.S. dollar began to depreciate. This depreciation is expected to continue over the next few years, which may potentially stifle imported beer brands.”
- Grace Wood, industry analyst for IBISWorld

Beyond new products, imported beer manufacturers also are updating packaging and marketing solutions to lift performance in the U.S. market. In 2021, Innis & Gunn, Edinburgh, Scotland, announced that its The Original and Caribbean Rum Cask brands now are available in six-packs of 330-ml bottles, replacing the four-pack of 300-ml bottles. The bottles also were updated to clear glass bottles that are embossed to highlight the Innis & Gunn brand name and home city of Edinburgh.

“Innis & Gunn’s new look for the Originals range is standout. The new look is confident and premium, reflecting the quality beer inside, and we are sure this will be welcomed by American retailers and consumers alike,” said Justin Fisch, president of U.S. beverage, responsible for sales, marketing and management of Innis & Gunn in the United States, in a statement at the time of the rollout.

Citing its research, the company adds that the new design drove 74% purchase intent among target beer drinkers. The company also significantly invested in marketing, including dedicated public relations, digital and social campaigns, while recruiting additional staff who will directly support the market, it says.

As one of the positive performers in 2021 for the U.S. beer market, imported beer is gearing up to ensure its growth continues.