In the book “Rebound: Train your mind to bounce back strong from sports injuries,” authors Cindy Kuzma and Carrie Jackson Cheadle identify more than 45 mental skills that athletes can employ throughout the recovery process that also can be applied to uninjured athletes to reduce vulnerability to injuries. When the United States first started feeling the wide-ranging effects of the pandemic, markets like craft beer did not have a go-to source for how to cope with the shutdown of many on-premise outlets, including brewer-owned taprooms. Based on what the market is seeing, it looks like today’s craft brewers could write their own guide on rebounding.

“After a difficult 2020 due to closing of on-premise, craft is once again growing,” says Brian Sudano, managing partner with New York-based Beverage Marketing Corporation (BMC).

Recognizing that craft beer’s performance is not at its peak, Grace Wood, industry analyst for Los Angeles-based IBISWorld, signals that the segment still remains healthy.

“Although demand for craft beer has slowed after a period of explosive growth, growth in this segment remains stronger than any other product segment in the beer market,” she says. “Demand for craft beer is being stimulated by a shift in consumer preferences toward variety, novelty and higher-end brands.”

“The craft beer market was partially insulated from COVID-19 declines due to strong demand from off-premise channels,” Wood says. “Many operators have made efforts to expand their distribution networks, especially within the off-premise market. Additionally, craft brewers are continuing to release new products to keep up with growing consumer preferences for variety and novelty.” 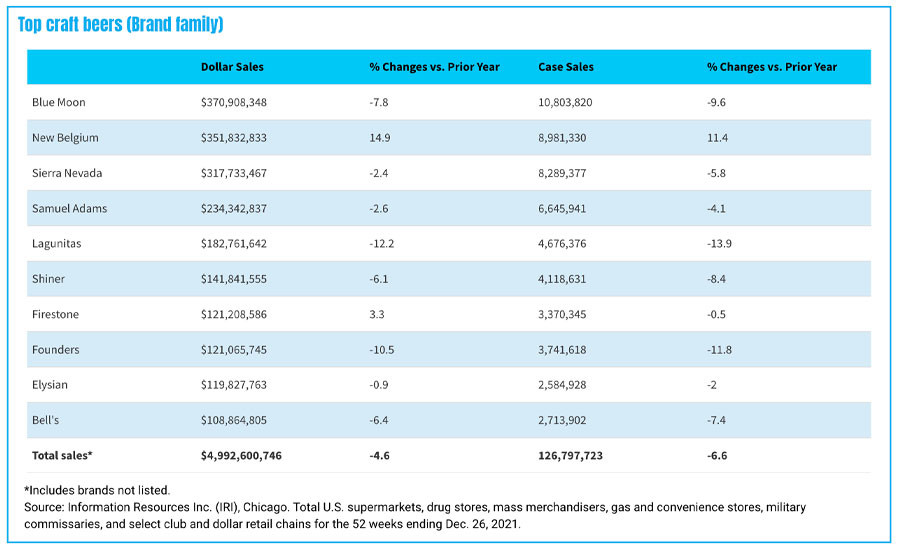 BMC’s Sudano notes that brewers also got inventive with their on-site venue. “Craft brewers created curbside pickup for its beers to help sustain themselves during taproom closings,” he says. “They have become creative with themes such as beer gardens and bringing in entertainment to attract more consumers.”

“Supporting work from home culture by dedicating taproom areas to communal workspaces during business hours has also become commonplace,” he explains. “Collaboration has gained importance and expanded scope to now not just include peer brewers but also other local businesses and more, with brewers driving customer interest and taproom traffic by hosting pop-ups events, curated meals, contests, etc. Pop-up events for breweries themselves in other parts of their home cities whether bars, restaurants, etc., has also gained importance.”

“Although demand for craft beer has slowed after a period of explosive growth, growth in this segment remains stronger than any other product segment in the beer market. Demand for craft beer is being stimulated by a shift in consumer preferences toward variety, novelty and higher-end brands.”
- Grace Wood, industry analyst for IBISWorld

Although analysts have highlighted craft beers’ ability to rebound, the beer segment still is facing the same challenges as other beer segments, including shifting consumer tastes.

“With growth of [ready-to-drinks] (RTDs), gaining space in off-premise remains a challenge along with how to recover from the pandemic impact in 2020,” Sudano says.

IBISWorld’s Wood echoes similar sentiments. “Craft beers are contending with the rising popularity of RTD cocktails and other canned alcoholic beverages, such as hard seltzers,” she says. “Additionally, the closures of on-site tasting rooms, bars and breweries amid the COVID-19 pandemic stifled the craft beer market in 2020, since craft beer is more dependent on these on-site channels than other product segments.”

In terms of off-premise performance, craft beer still looks to be in rebound mode as dollar sales were down 4.6%, totaling more than $4.9 billion, for the 52 weeks ending Dec. 26, 2021, in total U.S. multi-outlets, according to Chicago-based Information Resources Inc. (IRI).

As craft brewers look to offset these declines, the vast array of beer innovations to reflect the shifts of today’s consumers will lead the charge.

“After nearly five years with an industry-wide focus on hazy/New England IPAs, other styles on the rise have begun to change and diversify through 2021 and 2022,” BMC’s Greene says. “As excitement around ‘East Coast’ IPAs subsides, renewed focus on ‘West Coast’ IPAs from brewers across the country is occurring. Many brewers are putting renewed focus on craft lagers, with their own regional specializations and/or recipe twists, in addition to highlighting lower calories for health-conscious craft drinkers.

Meanwhile, IBISWorld’s Wood notes that IPAs still account for nearly one-third of craft beer’s revenue share and continues to gain in popularity. Yet, other styles are showing consumers’ demand for lighter options.

“Belgian Witbier, commonly referred to as white beer or Belgian white, has also gained popularity in recent years,” she says. “This lighter variety of beer is more popular during the summer season, and is favored among new beer drinkers due to its light and subtle flavor.”

Brewers also are utilizing their creative juices in new product development for bigger causes. Earlier this year, New Belgium Brewing, Fort Collins, Colo., and Imperfect Foods announced the release of Citrus Rescue IPA, a fruited IPA brewed using oranges that might not be “perfect” by society’s beauty standards due to little scars and blemishes but are just as healthy and delicious, the companies say.

The two companies ― both certified B Corporations ― came together with the goal of educating beer drinkers about the state of our broken food system, working to change the perception around the aesthetics of food, and encouraging more people to take steps to reduce food waste in their own lives, they add.

“Beer is a powerful vehicle to create impact. With every beer we make at New Belgium, we ask what purpose it serves for the people in our community,” said New Belgium Brand Manager Astrid Moresco, in a statement. “Citrus Rescue IPA is a delicious way for beer drinkers to start reducing the food ― and beer ― wasted in their own homes, and we hope it inspires beer drinkers to seek out and support certified B Corps like Imperfect Foods and New Belgium, which make the well-being of people and our planet a business imperative as equal to financial success.”

No matter which route craft beer takes as it rebounds from the effects of the pandemic, it is likely there will be no shortage of varietals.