In the Peacock Original “Psych 2: Lassie Come Home,” fake psychic Shawn Spencer and his pal Burton “Gus” Guster help their friend Santa Barbara Police Chief Carlton “Lassie” Lassiter after an ambush left him bedridden in a recovery clinic. After uncovering the assailant’s identity and wrapping the case, Lassie questions his future with the police force but in the final moments is determined to continue his road to recovery, which is symbolized by his walking down the hall to his wife, Marlowe.

For the U.S. beer market, the road to recovery is not as dramatic as the ending of a made-for-TV movie, but the major players are no less determined.

“The U.S. beer market is in a moment of recovery following declines associated with the COVID-19 pandemic, lackluster international demand and heightened competition from ready-to-drink (RTD) cocktails,” says Grace Wood, industry analyst for Los Angeles-based IBISWorld. “Consumers are demanding more variety and novelty, which is stimulating growth from regional and craft brewers.”

Brian Sudano, managing partner with New York-based Beverage Marketing Corporation (BMC), also notes the impact that novelty is having on beer as a whole. “The market continues to evolve with growth coming from alternative forms of malt beverages while traditional beer continues to contract,” he says.

Meanwhile, Kaleigh Theriault, beverage alcohol thought leadership manager for Chicago-based NielsenIQ, notes that with the exception of imported beer, U.S. off-premise beer sales across the board are in decline.

“This leads us to the conclusion that beer drinkers are looking for premium options and new and exciting alternatives in the off-premise,” Theriault explains. “When looking at how the segment has fared in the last two years, craft, imported and domestic super-premium beers all saw substantial growth, while below premium, domestic premium and malt liquor experienced declines reaching as low at 21.5% since 2019.

“We can attribute these trends to the pandemic related health and wellness revolution, which caused shoppers to seek out innovative, ‘better-for-you’ beverage alcohol offerings (i.e., non-alcoholic beer, hard seltzer, hard tea, etc.),” she continues. “Additionally, consumers’ new priorities for maintaining wellness caused 22% to cut back on overall alcohol consumption according to a recent NielsenIQ’s Omnibus Survey. Overall, we expect sales to continue to revert to 2019 levels as consumers shift from a pandemic to an endemic mindset.”

However, the U.S. beer market’s recovery plans could be altered following February’s report from the U.S. Treasury Department. The report “Competition in the Markets for Beer, Wine, and Spirit,” notes the significant growth in the number of small and “craft” beverage alcohol producers, but raises concerns about consolidation at the distribution and manufacturing levels.

In response to the report, Beer Institute President and CEO Jim McGreevy released the following statement:

“We are disappointed by the Administration’s mischaracterization of the thriving American beer industry. The American beer industry is one of the most vibrant industries in the country. Since 2010, we have seen more than 10,000 new breweries permitted, and today ― from agriculture and manufacturing to construction and transportation, the beer industry supports more than 2 million American jobs and contributes more than $331 billion to the nation’s economy. Consumers are benefiting from the growing number of brewers and beer importers, with more choices for beer than at any other time in our nation's history.

“Even with the COVID-19 pandemic, which resulted in a nearly $20 billion reduction in retail beer sales and a loss of nearly 570,000 jobs that depend on the beer industry, our nation’s brewers and beer importers continue to invest in their communities, support local jobs, and aid people in need,” McGreevy continued. “Despite being one of the most regulated industries in the United States, the beer industry is experiencing an unprecedented level of healthy competition. It will continue to grow and innovate so it can best serve the millions of Americans who make beer America’s favorite beverage alcohol.”

Bob Pease, president and CEO of Brewers Association, also released a statement relating to the report:

“The Brewers Association thanks the White House, Treasury Department, the Department of Justice, and the Federal Trade Commission for their work on this report; and we appreciate the recognition that despite growing numbers of craft brewers, beer remains a heavily concentrated industry, which poses competition challenges to craft brewers and consumers. We applaud the Treasury Department’s recommendations on how to improve competition in the beverage alcohol industry, many of which align with the Brewers Association’s submitted comments. 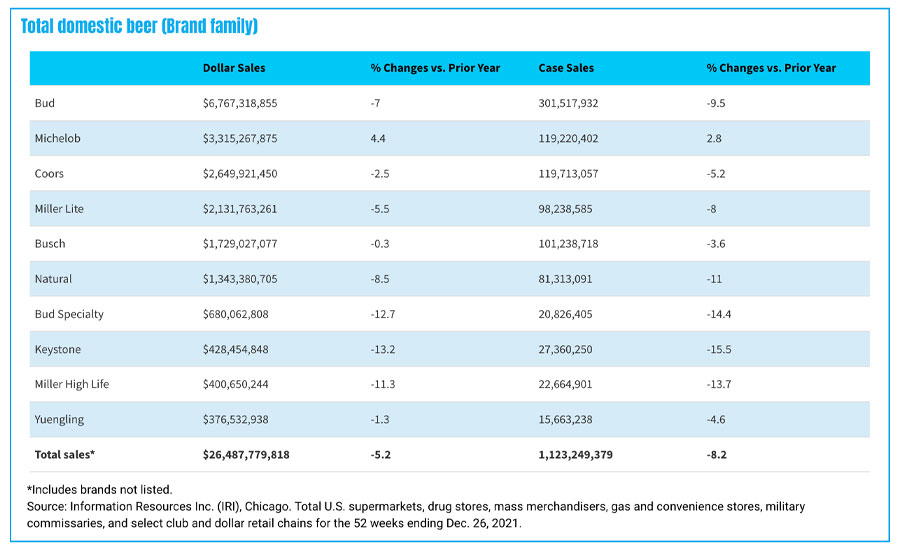 “Upon an initial review of the Treasury’s ‘Competition in the Markets for Beer, Wine, and Spirits’ report, we are glad to see that the report recognizes that some laws, even those originally designed for a pro-competitive purpose, have inhibited the growth and competitiveness of craft producers,” Pease continued. “Second, we see much to like in its conclusions and applaud the report’s focus on the Federal Alcohol Administration Act’s trade practice provisions and the continued need to combat practices like slotting fees and discriminatory conduct. Lastly, we appreciate the report’s recognition that some laws have become out-of-date and that new rules may better serve public health and foster competition.”

As beer manufacturers and distributors await what this could mean for the industry going forward, the beer market is hard at work improving on-premise performance while embracing new channel solutions.

“The pandemic crippled demand from on-premise channels, such as restaurants, bars and concessions. Since on-premise channels generally drive sales volume, particularly for sub-premium and premium brands, an increase in off-premise sales was not able to offset these declines,” IBISWorld’s Wood says. “Ultimately, the U.S. beer industry declined in 2020 during the height of the pandemic. However, as the economy reopened in 2021, replenishing on-premise sales, the industry is expected to have rebounded.”

Part of the beer market’s rebound efforts includes adoption of digital solutions such as eCommerce or direct-to-consumer (DTC).

“The rise of eCommerce and direct-to-consumer (DTC) shipping have expanded the potential market for retailers, wholesalers and manufacturers of beer, leading to greater revenue gains,” Wood says. “Conversely, easier access to alcohol via eCommerce and DTC shipping has led to a rise in competition from wine and RTD cocktails.”

“The pandemic crippled demand from on-premise channels, such as restaurants, bars and concessions. Since on-premise channels generally drive sales volume, particularly for sub-premium and premium brands, an increase in off-premise sales was not able to offset these declines. Ultimately, the U.S. beer industry declined in 2020 during the height of the pandemic. However, as the economy reopened in 2021, replenishing on-premise sales, the industry is expected to have rebounded.”
- Grace Wood, industry analyst for IBISWorld

For 2021, the total U.S. beer market was relatively flat as dollar sales totaled $44.2 billion, a decline of 0.4%, according to data for the 52 weeks ending Dec. 26, 2021, in total U.S. multi-outlets from Chicago-based Information Resources Inc. (IRI). In that market, total domestic beer ― which comprises domestic premium, domestic super-premium, domestic sub-premium and craft ― accounts for nearly 60% of the market share.

Although domestics might dominate in terms of market share, it has been challenged as consumer preferences have evolved. For instance, total domestic beer dollar sales were $26.4 billion for the 52 weeks ending Dec. 26, 2021, but this was a 5.2% decline compared with the previous year.

“The domestic beer market continues to struggle,” BMC’s Sudano says. “All segments with the exception of craft and [flavored malt beverages] (FMBs) declined. With the opening of the on-premise, craft beer taprooms began to experience growth along with the entire segment. Overall premium lights and value brands saw declines return in the mid-single digit range. While the fastest growing domestic brand Michelob Ultra saw growth slow dramatically, from double-digits to low singles. The clear winner despite a slowdown at the end of the year was FMBs, which grew in 2021 at around 10% and now represents 13% of the beer market.”

This thirst for novel beer formats and flavors has some of the major domestic participants ― St. Louis-based Anheuser-Busch and Chicago-based Molson Coors Beverage Co. ― entering these growing markets.

“Younger consumers have been moving much of their volume away from traditional beer and beer overall,” Sudano says. “This has driven brewers to compete across categories. [Anheuser-Busch InBev] and Molson Coors now are competing in RTDs across all beverage alcohol formats. Nearly all the innovation is taking place in FMBs and RTDs. These formats have also supported traditional cocktails when out of home. With competition from spirits and wine-based brands on the RTD side and the strength of spirit marketers, we project domestic beer declines to accelerate over the next few years.”

Despite these challenges, domestic brewers still are finding ways to entice consumers. For instance, Anheuser-Busch recently announced the national availability of Bud Light NEXT, a traditional lager that offers the sessionability and stats of a seltzer, the company says. With a 4% ABV, Bud Light NEXT contains zero carbohydrates and 80 calories. The light beer brand publicized its new offering during this year’s Super Bowl.

Featuring four vignettes synced to the tune of Barbra Streisand’s hit song “Gotta Move,” the new commercial titled, “Zero in the Way of Possibility,” demonstrates what’s possible when you choose to break traditional conventions and challenges fans to rethink the status quo, the company says.

The spot also marks another milestone for the brand's recent entry into the non-fungible token (NFT) space, by featuring a Nouns DAO partnership.  The partnership comes to life in the third vignette when their famous glasses, as well as a token from the new Bud Light N3XT NFT Collection, makes an appearance, according to the company.

To launch Beernaments, the brand partnered with actor and comedian, Jimmy O. Yang, to explain the holiday magic behind the drinkable décor and give you holiday hacks to make your tree extra merry in a new video. Beernaments fit snugly around 8-ounce cans of Miller Lite and were sold in six-packs.

“We know that people are looking forward to more intimate holiday celebrations this year, which means more Miller Time with close friends and loved ones,” said Sofia Colucci, global vice president of Miller family of brands, in a statement at the time of launch. “Our Beernaments are not only hilarious, but a great way to keep the holidays bright for beer lovers everywhere, from drinks to décor.”

No matter how domestic brewers are looking to engage with consumers, the beer segment will continue to find new ways to maintain its dominant position.