As bars and restaurants close their doors or move services to drive-up, pick-up or deliver-only in response to the COVID-19 pandemic, the global on-premise food and beverage industry is reeling with the repercussions. As of March 17, 21 U.S. states and several major cities began prohibiting bars and restaurants from serving customers on-site. Experts also are echoing the industry’s sentiments, which include deeply rooted concern over the impact to bars, restaurants, brewery taprooms and other food and beverage establishments, as well as the companies that supply their food and beverage.

In the midst of the chaos and operational shifts, many are asking, “What’s next?”

“This is a unique time in our nation’s history, and America’s restaurant and foodservice industry is proud to continue serving our communities in every way we can,” said Marvin Irby, interim president and chief executive officer of the National Restaurant Association, in a statement. “The foodservice industry was on track to have sales of $899 billion this year. Sales are already slowing, and the loss of revenue will have a deep impact on the small-business owners of local restaurants.”

Amanda Topper, associate director of foodservice at Chicago-based Mintel, says that full-service restaurants, such as casual dining and fine dining, will particularly feel the brunt of the impact with slowing on-premise traffic, especially because the segment typically warrants a higher price point.

“In contrast, limited-service restaurants, such as quick service and fast casual restaurants, will be in a better position to respond to off-premise dining demand due to established investments in online ordering and delivery and their greater affordability,” Topper adds.

She also notes that drive-thru services will put these restaurants at an advantage, allowing food provision while limiting human contact.

Although alternatives exist for food purchases, the sale of beverage alcohol through on-premise outlets remains more challenged. As of March 16, bars and restaurants in New York, New Jersey and Connecticut have been given waivers for carry-out alcohol, and with regulatory efforts moving quickly, other U.S. cities could follow suit. To encourage ongoing food and beverage sales and help businesses — and their suppliers and distributors — adapt to the shifting landscape, many on-premise operations are shifting to online sales where plausible.

Businesses implementing this concept include New York-based Torch and Crown Brewing Co., which plans to launch free same-day beer delivery service in Manhattan for online orders placed through its website.

“We know people are on high alert due to concerns about COVID-19” said Mike Roper, chief executive officer of Muscle Maker Grill, in a statement. “Our guests have been impacted in one way or another and we wanted to let them know that we care about their health. ... Now guests can craft their favorite smoothie or shake and add in our free nutrient-dense immunity-booster to help them power through their day.”

Focusing on the future

Prior to the current on-premise climate, short-term data showed a softening of the channel. In mid-March, average dollar sales in the average U.S. on-premise outlet were down $28,000 and total transactions were down 24 percent compared with the same two-week period in 2019, based on Nielsen CGA Check-Level Insights Pool (CLIP) data for the two-week period ending March 7, combined with survey data collected March 13-16. Scott Elliott, senior vice president at Chicago-based Nielsen CGA, announced that during the two weeks ending March 7, only 47 percent of consumers planned to go out less frequently in the subsequent two weeks, even before bars and restaurants were placed under current restrictions.

“As of March 13-16 when we conducted our survey, 40 percent of consumers still remained positive that they would continue to visit and enjoy the on-premise as usual, without mandated restrictions,” he says. “With these restrictions increasingly widespread, the situation will continue to get worse before it gets better.”

However, Elliott anticipates a dramatic return to on-premise visits and sales when mandates are dropped.

“When that day comes, there will still be a strong appetite for and significant return to the on-premise space, so establishments and manufacturers will need to be prepared to meet that moment,” he says.

Although the on-premise channel’s future is left with more questions than answers, establishments can look to recover from this situation by focusing on the trends that have been driving the market.

One trending product that has been disrupting the bar and restaurant scene is hard seltzer, according to Nielsen. Nielsen’s February 2020 article “Hard Seltzers are Shaking Up the Competition at U.S. Bars and Restaurants” stated that seltzers have created a massive disruption in the beverage alcohol landscape. 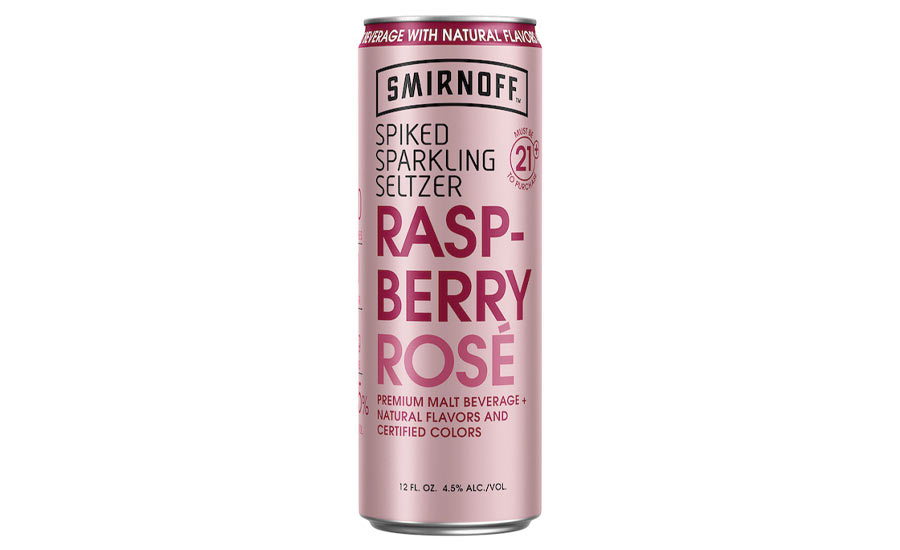 According to Nielsen CGA data, the number of consumers drinking hard seltzers at bars and restaurants increased by 73 percent between the spring and fall of 2019, equating to 7.5 million new drinkers.

“It’s a well-known fact that hard seltzers have begun to dominate supermarket shelves, but up until now, we haven’t really been able to quantify the effect this phenomenon has had on the nation’s bars and restaurants, with just over half of hard seltzer drinkers drinking them instead of what they normally drink when they’re out,” said Nielsen CGA Client Solutions Director Matthew Crompton, in a statement.

However, it’s not just the types of beverage alcohol that on-premise operators should be be focusing on, but also the way consumers are approaching drinking trends. According to Mintel, drinkers are getting more adventurous with their selections, and are willing to try new beverages more often. In fact, Mintel notes that 20 percent of diners always try a new drink, and at least half of consumers sometimes try a new drink, enabling on-premise businesses to appeal to diners’ desire to experiment.

In addition, Mintel states that server recommendations, menu pairings and specials that cannot be easily replicated at home are another opportunity for on-premise businesses to promote diners exploring and indulging in offerings such as curated pairings or flights.

New and creative offerings also could piggyback on the seltzer craze. Nielsen reports that 35 percent of consumers say they would use seltzer as a mixer in a cocktail and 33 percent would use it as a mixer with a spirit. 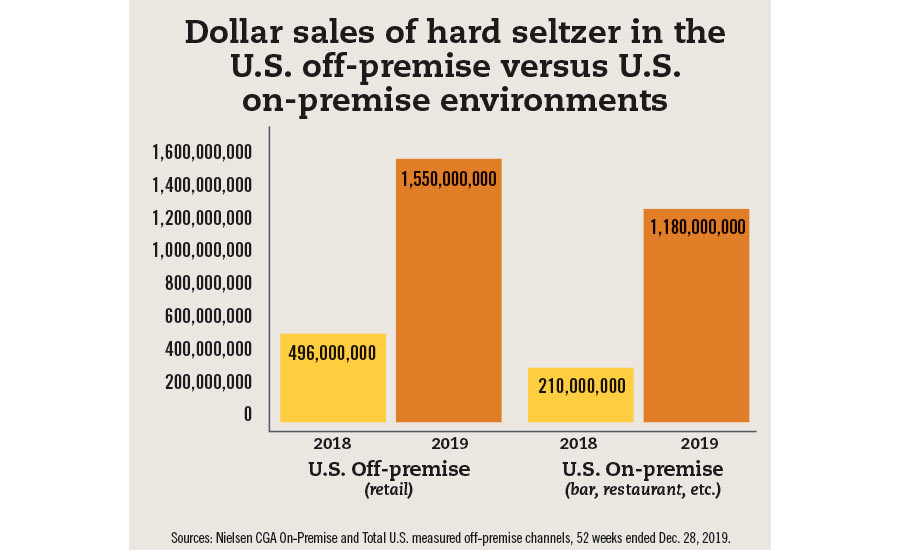 However, because of consumers’ more adventurous palates, traditional beverage options might see a slight downturn.

Mamtani advises on-premise businesses to offer a wide variety of options to maintain sales. For instance, low-alcohol offerings, including alcohol-free cocktail menus and bars; hard beverages, such as hard teas, kombuchas, coffee and agua frescas; and home-grown beer given the increasing popularity of brewpubs and taprooms.

“This will enhance more support for local craft beers brands who want to develop outside their geographical locations,” Mamtami adds.

The resurgence of social drinking

When on-premise locations are able to safely reopen, a resurgence in social drinking could be possible as Americans who have been isolated for weeks or months are released back into bars and restaurants. Research shows that prior to these broad shutdowns, consumers already were exhibiting a growing desire to consume alcohol outside of the home.

Mintel’s September 2019 “Alcoholic Beverage Drinking Occasions – US” report stated that 22 percent of consumers have increased their away-from-home alcohol consumption compared with last year. As a result, entertainment venues like Topgolf and Punch Bowl Social were expanding their number of units across the country as diners were looking to mix fun and social activities with on-premise drinking.

“Operators should lean into the social nature of drinking on-premise, as connecting with friends and family and celebrating are top drivers for the occasion,” Mintel’s report states. “In order to better compete with at-home drinking occasions and the increasing number of legal cannabis products available, operators should also focus on cultivating relaxing occasions as well, such as soft music and more comfortable seating.”

Mamtami also highlights the impact that premiumization trends are having on the on-premise channel. “Consumers are requiring more attention to be given to higher quality products, with natural and organic signs on the label. This is where craft sodas are taking over a niche in the beverage industry,” she notes. “The idea that small-batch processing provides high-quality refreshments is spot on with consumers. Small batch production and in-house craftsmanship draw on the pressures that push consumers toward organic and natural products.”

Beverage affordability is another key factor, as 41 percent of consumers state that saving money is a reason for reducing consumption of alcohol, Mamtami adds. As a result, reasonably priced cocktails could be a solution operators employ to spurn increased consumption and sales.