The entire grocery landscape changed when Seattle-based Amazon bought Austin, Texas-based Whole Foods Market Inc. in 2017. Before the acquisition, grocery retailers were thought to be somewhat protected from the threat of eCommerce, primarily because of the challenges and expenses inherent in delivering perishable foods to consumers’ homes, explains Bob Hoyler, senior analyst at Euromonitor International, Chicago. Amazon’s entrance into the market, however, brought the threat to life.

“Since then, grocery retailers across the country have scrambled to adapt by accelerating planned pivots to omnichannel retailing,” Hoyler says. “Many of these retailers have partnered with same-day delivery services, such as Instacart and Shipt, in order to offer same-day grocery delivery service to their customers. Additionally, many of these retailers have been aggressive in expanding click-and-collect ordering and curbside pick-up services to a host of additional store locations to better cater to time-strapped consumers.

“As a result, more grocery purchases than ever before are being made online,” Hoyler says. “At this time, this trend shows no signs of slowing down.”

According to New York-based Nielsen’s eCommerce measurement powered by Rakuten Intelligence, U.S. eCommerce sales of consumer packaged goods (CPG) items totaled $65.2 billion in the 52 weeks ending January 2019, up 29 percent from the previous year. The market research firm also tracked a 32.7 percent compound annual growth rate (CAGR) during the past three years. Furthermore, share of click-and-carry sales increased from 4 percent to 11 percent of all CPG eCommerce sales in the past two years, Nielsen reports.

“eCommerce is still relatively small when compared to in-store sales for beverages; however, its growth is significant,” Gagliardi says. “As eCommerce continues to grow and more stores include click-and-collect options, beverages can be expected to make up a larger portion of omnichannel sales.”

In particular, coffee, bottled water and carbonated beverages currently make up some of the largest portions of beverage eCommerce sales, Gagliardi says.

“Categories like these are bulkier and heavier to ship, so the click-and-collect fulfillment type has helped these categories to grow,” he says.

The eCommerce format also has given smaller brands a better chance to compete.

“With no fight for shelf space online, it has leveled the playing field for small brands with less capital,” Gagliardi explains. “This is causing many large category captain brands to not be able to maintain their share [of] dominance online. Beverage brands need to create a strong online presence in order to maintain their in-store share.”

“With items that need regular fulfillment, such as coffee pods and bottled water, subscribe-and-save could become important for beverages since it gives shoppers the convenience of getting items delivered that they need on a regular basis,” Gagliardi says.

“If a shopper has a bad experience with spoiled or expired items being delivered, it can deter people from buying groceries or that specific brand online in the future,” IRI’s Gagliardi says.

While consumers and retailers both worry about product quality remaining high, many grocery retailers also are hesitant to partner with third-party, same-day delivery services because they don’t want to lose control over their customer relationships, Euromonitor’s Hoyler points out. As a result, some grocery retailers have developed their own same-day delivery services, he notes. He points to Minneapolis-based Target Corp.’s 2017 acquisition of Birmingham, Ala.-based Shipt Inc. as an early example of bringing this capability in-house.

“Many smaller operators, however, lack the resources to develop their own same-day delivery services,” Hoyler says. “And with food and drinks’ eCommerce sales expected to increase substantially over the forecast period, it is clear that third-party delivery services like Instacart will continue to reap the dividends from the shift to grocery delivery for some time to come.”

However, grocery delivery isn’t the only avenue expanding in eCommerce. Click-and-collect ordering is potentially the bigger story in the U.S. eCommerce market currently, Hoyler says.

“The explosion in the number of curbside pick-up access points at grocery stores across the country has been an extremely important driver of growth in food and drinks’ eCommerce sales over the last two years,” he says.

Bentonville, Ark.-based Walmart Inc., for example, expanded its curbside pick-up service to more than 2,100 stores in 2018 and is on pace to bring the service to an additional 1,000 outlets this year, Hoyler says. 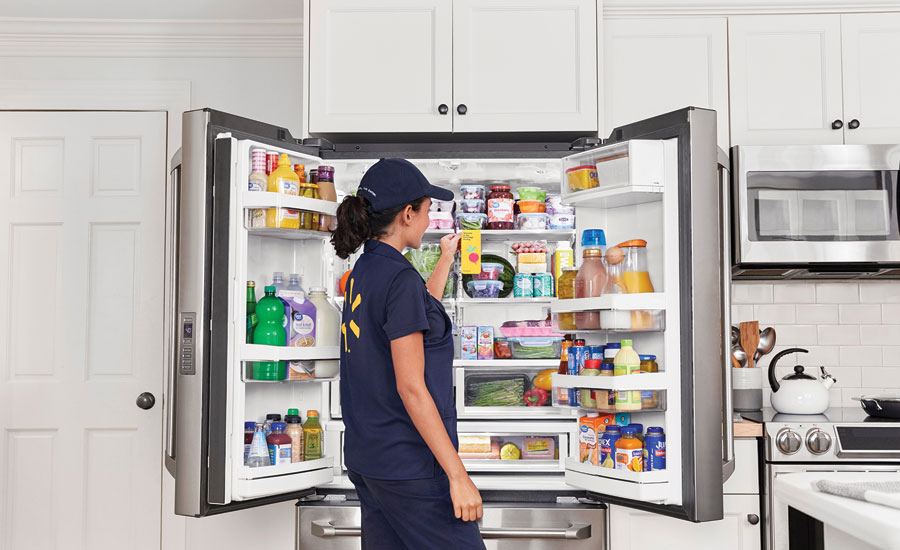 Walmart also launched its own delivery service, called InHome Delivery, in select locations this past summer. This service allows customers to order food and have it delivered directly to their kitchen or garage refrigerators via smart entry technology. They can even watch their groceries being delivered live through a video platform.

Yet, both delivery and curbside pick-up options offer one significant obstacle to grocery retailers: a lack of impulse purchases. This is difficult to offset unless customers come into the store. However, with click-and-collect access points inside the store, retailers can position traditional impulse items like candy and soft drinks, near the access points to encourage impulse purchases, Hoyler suggests.

For busy consumers, time is valuable. Thus, the convenience that eCommerce offers is its biggest benefit, experts say. To quantify the benefit of convenience, San Francisco-based Instacart documents how many hours customers have saved by using its grocery delivery service.

In contrast, frequent online grocery shoppers are more motivated by better selection or easier-to-use websites or apps, it reports.

Convenience will be vital for omnichannel shoppers