Bottled water bubbles over with growth

Except for two relatively small declines in 2008 and 2009, when most beverage categories contracted, bottled water volume grew every year from 1977 to 2018, the report says. During a span of 40 years, bottled water maintained 17 double-digit annual volume growth spurts, while at the turn of the century, per capita soft drink consumption regularly exceeded 50 gallons, it states.

Chicago-based Euromonitor International’s Passport report also notes the steady growth of the still and carbonated water segments, with sales of $17.1 billion in 2013 and $22.1 billion in 2018, a compound annual growth rate (CAGR) of 29.4 percent between 2013-2018, it states.

Bottled water leads off-trade volume sales of CSDs as consumers’ search for healthier, less sugary beverages, states Euromonitor’s March “Bottled Water in the US” report. “[B]ottled water has evolved in the U.S., going from a product that used to be enjoyed on limited occasions to one that is consumed throughout the day on a variety of occasions,” it states. “As bottled water shows continuous growth while other soft drinks categories are in serious decline, an increasing number of new product developments in juice and carbonates are taking inspiration from bottled water by positioning themselves in a manner similar to bottled water.”

Mintel’s Bryant also highlights the growth of the bottled water category. “The packaged water market is thriving thanks to consumer interest in health, product innovation from water brands and the surge in popularity of sparkling waters,” he says. “The popularity of functional waters is one of the most important trends within the larger product market.”

Convenience/PET still bottled waters had sales of $12.5 billion in total U.S. multi-outlets including convenience stores, a 3.6 percent increase for the 52 weeks ending Aug. 11, according to data from Chicago-based Information Resources Inc. (IRI). From a smaller base, IRI reports that seltzer/sparkling/mineral bottled waters grew 13.1 percent and generated dollar sales of $3.1 billion for that same time period.

Mintel’s February “Still and Sparkling Water US” report affirms that consumers are more interested in no-frills, inexpensive water. “Private label brands represent 30 percent of the entire packaged water market,” it states. “While inexpensive water dominates the market, higher-end waters are trending. Premium, sustainable and functional waters are all growing both in terms of sales and product development.”

Beyond private label, Aquafina, a brand of PepsiCo, Purchase, N.Y., and DASANI, a brand of The Coca-Cola Co., Atlanta, are top performers in the still water segment as both posted sales just below $1.1 billion, respectively, in U.S. multi-outlets for the 52 weeks ending Aug. 11, IRI data reports.

Market research analysts note that innovation will continue to be at the forefront of sales for the bottled water and enhanced water categories.

BMC’s Hemphill expects the gap between CSDs and water to widen, particularly because value-added waters like vitamin-infused waters, electrolyte-infused waters, caffeine-infused waters and even sparkling waters infused with cannabidiol (CBD) are giving consumers a plethora of choices.

“Value-added waters are growing at a brisk pace,” Hemphill says. “Water has proven to be a great vehicle for refreshment beverage innovation. The category continues to evolve with a steady stream of new products entering the market.”

To capitalize on consumers’ thirsting for more choices, more and more companies are hopping on the healthy hydration bandwagon and releasing new products. 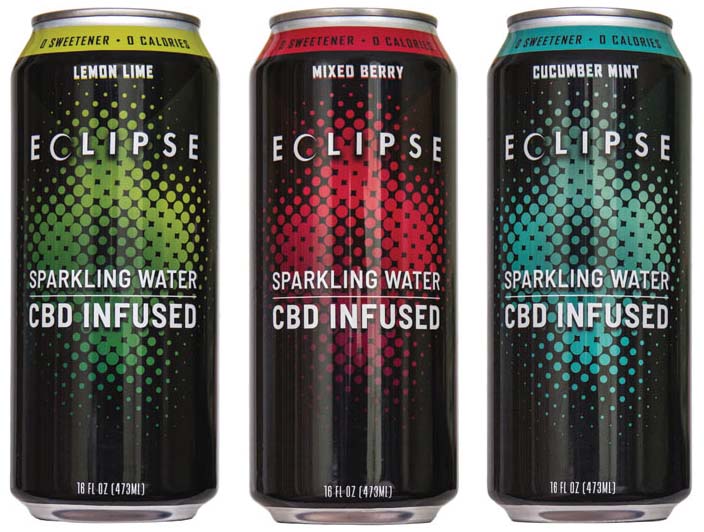 Eclipse launched its self-titled CBD-infused sparkling water in more than 1,000 stores in the Pacific Northwest. The water contains 20 mg of CBD, zero calories and zero sweeteners, and is available in three flavors: Cucumber Mint, Mixed Berry and Lemon Lime. (Image courtesy of Eclipse)

For instance, in September Portland, Ore.-based Eclipse launched its self-titled CBD-infused sparkling water containing 20 mg of CBD in each serving in three flavors: Cucumber Mint, Mixed Berry and Lemon Lime. The sustainably sourced water comes from an aquifer deep beneath the Cascade Mountains and has zero sweeteners and zero categories in each 16-ounce can, the company says.

In its first-ever State of the Natural Industry report, Chicago-based SPINS notes that water consistently ranked in the Top 5 fastest-growing categories over a three-year period both through the lens of natural products and within the total marketplace, it says.

However, innovation is not limited to the finished products. Packaging also is commanding a growing role in the packaged water market. For example, Millennium NC Beverages, Waukesha, Wis., offers Elkiee in recyclable 8-ounce, BPA-free pouches that come with a built-in straw. With packaging aimed at children, the freezable water pouches have a 7.8 percent pH balance, a calcium content of 49.8 percent and a magnesium content of 31.1 percent, the company says.

“Sparkling water is one of the fastest growing categories in the entire beverage industry; sparkling water sales grew an estimated 118 percent from 2013 to 2018,” Mintel’s report states.

Euromonitor’s Passport report forecasts the still and carbonated/sparkling water segments will continue to grow robustly, with dollar sales of $24.5 billion by 2023 and a five-year CAGR of 10.6 percent for the 2018-2023 timeframe. BI