An old Chinese legend claims that tea has been around since as far back as 2737 B.C., when leaves from an overhanging Camellia sinensis plant fell intro Emperor Shennong’s cup of boiling water. As one of the most consumed beverages around the world, tea offers an array of health benefits including reducing cancer and heart disease risk, to improving dental health and boosting weight loss, according to the Cleveland, Ohio-based Academy of Nutrition and Dietetics.

The number of Americans who drink tea today exceeds 158 million, which is about half of the U.S. population, the Academy says, citing a survey from the Tea Association of the U.S.A. Inc. The trend of increased consumer purchases of tea is expected to continue during the next five years, it adds.

“Tea enjoys widespread incidence of use, at 90 percent consumer participation,” Chicago-based Mintel says in its September 2018 “Tea and RTD Tea – US” report. “The category offers a variety of product formats and flavors and is suitable for numerous drinking occasions and serving options. This diversity appeals to a wide swath of consumers. Beyond broad appeal, tea also enjoys strong frequency of consumption.”

“Overall growth of tea has been driven by convenient RTD teas, particularly refrigerated varieties (including kombucha), that have a more health aura than shelf-stable products,” it continues. “Tea has also benefited from consumers’ ongoing recognition of its healthy properties, especially compared to sugary carbonated beverages.”

In addition, bagged/loose leaf tea and RTD tea have benefited from a prosperous economy enabling consumers to trade up to more premium and costly varieties, particularly impacting RTD beverages as consumers are more likely to purchase new beverages or new varieties as per capita disposable income increases, she adds.

Similarly, Gary Hemphill, managing director of research at New York-based Beverage Marketing Corporation (BMC) notes the impact of the RTD category. “In recent years, RTD tea has been outperforming the overall tea category,” he says. “Consumers are increasingly opting for the convenience of RTD products in spite of the fact that they are generally more expensive.”

Although tea features numerous health benefits, industry experts warn that RTD might not offer those same benefits. “While tea has strong connection as a [better-for-you beverage] BFY beverage, the RTD tea segment doesn’t necessarily share the same positive health halo,” Mintel’s report states. “Three out of 10 tea drinkers agree that RTD tea is too high in sugar and nearly a quarter think RTD contains too many artificial ingredients,” it adds, citing a Lightspeed/Mintel survey of 1,809 internet users aged 18+ who drink tea.

IBISWorld’s Amir echoes similar sentiments, noting that 86 percent of RTD tea production stems from black tea. However, despite it having fewer health benefits relative to other tea varieties, black tea continues to remain the most popular tea of choice, she says.

As consumers continue to grow aware of what they put into their body, beverage-makers have had to adapt and formulate using healthy ingredients. “The tea category’s healthy positioning has benefited from its performance in the market, and is one of the driving factors behind the category’s growth,” BMC’s Hemphill says.

IBISWorld’s October 2018 “Tea Production in the US” report also highlights the plant’s healthy positioning. “Growing health awareness among Americans and new studies touting the healthful, antiaging benefits of tea have bolstered demand for the tea production industry considerably over the past decade.

“… In response to growing demand, companies are expanding their range of tea flavors, many of which boast medicinal properties,” it continues. “Herbal tea, which contains ingredients other than the tea plant, such as bark or roots, has been widely touted for its health benefits. Innovation has also lead to an increase in exotic and seasonal options, such as Madagascar Vanilla and Sweet Harvest Pumpkin.”

Although traditional flavors comprise the bulk of the market, new and exotic flavors have helped to drive category growth, BMC’s Hemphill adds.

Whether it’s for antioxidants, an energy boost, a digestive aid or relaxation, the functional benefits of tea consumption remains a large draw for consumers, experts say. “The tea and RTD tea production industries are in tune with growing health consciousness and have been promoting tea as a healthy beverage for years,” IBISWorld’s Amir says. “Increasingly, there has been a shift toward functional beverages, such as detox teas and teas infused with melatonin, catering to existing health and lifestyle trends.”

Beverages with these functional benefits typically are marketed toward busy millennials who are looking to improve the quality of their sleep and increase their energy, she says. These consumers are interested in functional beverages as a way to improve their day-to-day functioning and accommodate their busy lives, she adds.

Following a similar path, Packaged Facts also highlights the functional properties of tea, which increasingly are being added to RTD teas. “While functionality abounds when it comes loose-leaf teas on the market, the same now can be said for the RTD category,” the report states. “RTD tea brands are increasingly distinguishing themselves by functionality… Green tea itself is considered by many to be a superfood, as research shows it can improve brain function, prevent cancer and even aid in weight loss. Green tea has progressed into the mainstream and can be found in numerous popular RTD teas, like Snapple and Pure Leaf.”

MindFull Inc., Boulder, Colo., introduced its own version of a functional, RTD tea beverage. Vibe is an RTD line of organic, electrolyte tea made with artesian spring water, which includes naturally occurring electrolytes and minerals, the company says. Available in four flavors – Mint, Lemon, Peach and Pomegranate – Vibe contains 48 mg of naturally occurring caffeine from USDA-certified organic black tea, and 1 gram of sugar and 20 calories in each 500-ml serving, it adds.

A different take on tea

One particular sub-category of tea — kombucha — recently has proliferated throughout the market. As a tea that is fermented with bacteria and yeast, it is rich with probiotics, antioxidants, amino acids and enzymes, creating the kind of healthy-halo beverage consumers are trending toward.

“Kombucha is one of the trendiest beverages and refrigerated tea, which includes kombucha, is the fastest growing segment of the tea market,” says Caleb Bryant, senior beverage analyst at Mintel.

Even with its rapid growth, kombucha still is fairly niche within the category; only 23 percent of consumers drink kombucha, compared with the 75 percent who drink bagged hot tea, he says.

Another trend recently finding its way into the market is sparkling tea. “More frequently tea is being integrated into sparkling beverages, energy drinks and juices,” Packaged Fact’s report states. “The carbonated soft drink or soda category is challenged and many consumers [who are] moving away from soda still want flavored drinks that have bubbles. But they want healthier, more natural versions with less or no sugar. One of these soda alternatives is RTD tea, which has seen a spate of sparkling versions to hit store shelves.

“This is a trend that should see continued expansion as consumers seek the health benefits of tea, but also want the effervescence of a carbonated beverage, the boost of energy ingredients, and/or more taste options,” it says.

On the more progressive side, as the beverage world continues to explore the realm of cannabis-infused beverages, teas are poised well for the green ingredient, Mintel’s Bryant notes. “Tea lends itself well to CBD/THC infusions as both substances, tea and cannabis, are associated with relaxation,” he says. “From our ‘Recreational Cannabis User’ report, 34 percent of consumers aged 22-plus in states where it is legal to purchase cannabis for recreational use who consume cannabis or are interested in consuming, would be interested in a cannabis-infused tea.”

Packaged Fact’s also notes the potential of cannabis tea. “Tea is a logical category for [cannabidiol] (CBD) innovations due to its plant and herbal roots, and functional characteristics,” the report states. “Although studies have not yet confirmed health benefits of CBD, proponents say it can ease stress, pain, anxiety and insomnia.” 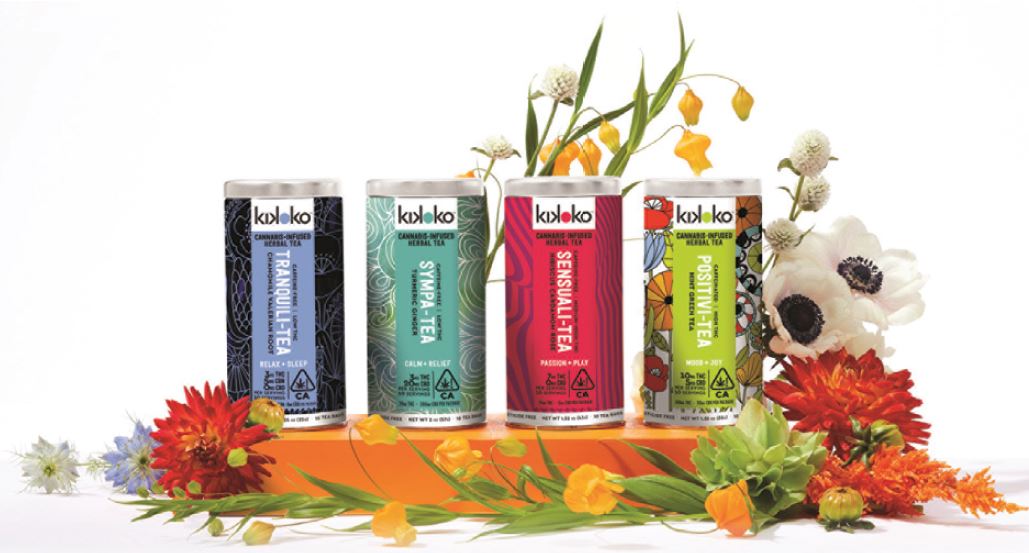 Tea lends itself well to CBD/THC infusions as both substances, tea and cannabis, are associated with relaxation, Caleb Bryant says. Kikoko Teas are designed for people wanting a low-dose cannabis product, but also to address specific health concerns, the company says. (Image courtesy of KIKOKO)

For example, Emeryville, Calif.-based Kikoko, created a product that combines the healthful aspects of both tea and cannabis. Kikoko teas are formulated to deliver reliable cannabinoid doses of CBD and THC (tetrahydrocannabinol) for specific health concerns, the company says. It uses CBD from the marijuana strain of cannabis, which clinically has been proven to be more medicinally effective than CBD from hemp, it adds. Kikoko is available in four varieties: Tranquili-tea for sleep, Sympa-tea for pain and anxiety, Sensuali-tea for libido and Positivi-tea for mood and joy.

The future of the tea category remains bright due to the large, stable base of users and consumption frequency, even amidst the expanding non-alcohol beverage landscape, according to Mintel’s report. Messaging and innovation that focus on health and premium attributes show potential for the category, it says. Emphasizing specific functionality [like relaxation or energy] will help the category stay on track, it adds.

However, during the next five years to 2024, IBISWorld expects that the industry will consolidate due to increased merger and acquisition activity, Amir explains. “Niche operators are expected to continue to play a role in the industry, albeit it may become increasingly difficult to compete,” she says. “Existing operators will need to continue to adapt to changing health food trends and continue to develop premium [versions] of existing tea varieties.”

Nonetheless, to better position themselves in the market, tea and RTD producers will need to find new ways of distinguishing their brand from the competition, whether it be through advertising, flavors or entirely new products, Amir advises. BI