Whether it’s on the rocks, in a cocktail, blended or a straight shot, consumers’ thirst for premium alcohol continues to drive growth in the U.S. spirits market. In a February press release, the Washington, D.C.-based Distilled Spirits Council reported the ninth consecutive year of record spirits sales and volumes, reflecting continued year-over-year market value gains.

In 2018, spirits gained market share versus beer and wine with sales rising seven-tenths of a point to 37.4 percent of the total beverage alcohol market, according to the association. This marks the ninth straight year of market share gains overall, where each point of market share is worth $740 million in supplier sales revenue, it says.

Supplier sales were up more than 5.1 percent, rising $1.3 billion to a total of $27.5 billion, while volumes rose 2.2 percent to 231 million cases, a 5 million increase in cases compared with the prior year, it adds.

“These robust results show adult consumers are continuing to favor spirits over beer and wine, particularly among millennials,” said Distilled Spirits Council President and Chief Executive Officer Chris Swonger, in a statement at the time of the release. “The spirits sector is benefiting from millennials who demand diverse and authentic experiences, and desire innovative and higher-end products.”

Eric Schmidt, director of alcohol research at New York-based Beverage Marketing Corporation (BMC), also notes the solid performance of the spirits category. The market has continued to gain in the 2 percent range for the past three years, he says. This can be attributed to the category offering a wide array of different products that cater to many different consumer tastes, he adds.

Similar to growth in the overall spirits category as a whole, most sub-categories also saw increases in dollar sales and case counts, IRI data suggests. Within the whiskey category, dollar sales totaled around $2.5 billion, a 7.6 percent increase versus the prior year, while case counts also increased by 5.2 percent over the 52 weeks ending Jan. 27 in IRI measured outlets.

Vodka sales totaled around $2 billion, a 4.7 increase over the prior year while case sales increased 3.1 percent, the research firm reports.

Tequila sales totaled around $5.1 million, marking the most significant increase in sales at 12 percent, and a case sales increase of 10.1 percent, during that same timeframe.

The Distilled Spirits Council echoes similar sentiments on sub-category spirits’ growth. Noting that the American whiskey segment was up 6.6 percent to $3.6 billion, and tequila was up 10.2 percent to $3 billion, the association reports.

The association also identifies consistent growth from other sub-categories:

Accounting for one-third of all volume sales, vodka remains the category’s large segment and showed solid growth in the past year, causing a noteworthy increase for the category as a whole, the council says.

Matthew Barry, senior beverage analyst at Chicago-based Euromonitor, also highlights the top-selling performance of the vodka segment. “In a purely volume sense, vodkas are performing the best, but that is because [the category] is so large to begin with,” he says.

Other sub-categories that are experiencing growth have made an impact on the overall market. “I would call out tequilas as the outstanding performer in American spirits,” Barry says. “… Thanks to favorable demographic trends, strong product innovation and a successful move toward premium products. Some segments of whiskey are also doing tremendously well. Japanese whiskey has been a real standout. Irish and craft are also segments I would call out as doing pretty well among whiskies.”

The trend toward premiumization is bolstering growth for the U.S. spirits market. “Premiumization in the category is one of the key underlying characteristics that have helped drive [category] growth,” BMC’s Schmidt says.

Likewise, Euromonitor’s Barry notes premiumization’s impact. “I think every category is either going through significant premiumization or trying to figure out how they could do so in the future,” he says. “Tequila has done an especially good job of it in recent years, while there are some others — rum in particular — that have tried but have struggled to do it as well.”

A January Nielsen Insights titled “Tops of 2018: Tequila Drove Spirit Category Growth in 2018,” highlights tequila’s role in premiumization. “In 2018, tequila led the spirits category in volume and value growth across both on- and off-premise outlets in the U.S.,” it says.

“While all tequila varieties posted growth in 2018, añejo, reposado and white silver contributed most to the overall category growth,” it adds.

Similarly to tequila, other spirit segments have played a part in the premiumization of the category, BMC’s Schmidt says. “Consumers have become more attuned to the nuances of whiskey and the premium tier of whiskeys have done well,” he says. “Same thing with tequila and Cognac, consumers are trading up to higher-priced segments.”

Like Schmidt, Nielsen highlights the premium tier of whiskeys. “Bourbon and Irish whiskey contributed most to whiskey growth in 2018, with volume increases of 2.6 percent and 6.3 percent, respectively, and will be worth watching in 2019,” the Insights states.

The Distilled Spirits Council’s Chief Economist David Ozgo also points to premiumization as a significant growth driver in the category. “Growth was concentrated in the higher priced categories, allowing the industry to enjoy significant revenue growth while also picking up drinking occasions from other beverages,” Ozgo said in a statement.

The performance of the spirits category can be attributed to several factors. According to Los Angeles-based IBISWorld’s December 2018 report titled “Wine & Spirits Wholesaling in the US,” spirits consumption is greater among men than women. While consumption of spirits tends to be concentrated in the age group of 45 and older, consumption has increased among those aged 25 and younger, it says.

Several factors contributed to the growth of spirit consumption including cocktails becoming well-positioned to meet adult millennials’ demand for unique and varied experiences; local distilleries are driving modernization of state and local laws and generating excitement in the category; and spirits have become a fixture in popular culture and are part of the norm, IBISWorld’s report explains, citing data from the Distilled Spirits Council. 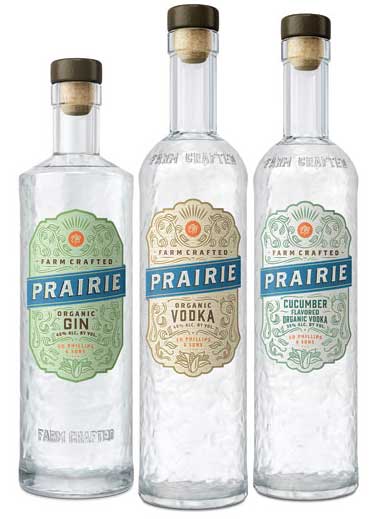 Euromonitor’s Barry also highlights the experiential aspect of spirits consumption. “I think what is especially interesting is the idea of ‘responsible drinking,’ not purely in the idea of consuming less alcohol but in making other aspects of the drinking experience more responsible,” he says. “You see increased amounts of brands emphasizing things like how they are using organic grains or they have reduced environmental footprints, especially in the craft segment. … The idea is to make the drinking experience more guilt-free, and by extension, more enjoyable.”

In the same token, BMC’s Schmidt notes that younger consumers are more interested in authenticity and healthy options. Healthy options have helped drive growth albeit on a smaller basis and this includes products that tout their organic ingredients and natural resources, he says.

Chicago-based Mintel also identifies the opportunity for health-focused brands. “White spirit brands can appeal to health-conscious consumers by highlighting the healthfulness of white spirits relative to other alcohol types or creating a health-focused marketing campaign,” it states in its December 2018 “White Spirits – US” report. “Many flavored vodkas are now calling out their use of natural flavorings; this appeals to health-minded consumers’ interested in clean label products.”

In order for spirits brands to be successful, experts note that authenticity is key. “The heritage and authentic messaging bodes well for stalwart brands to continue to post positive results,” BMC’s Schmidt says. “Marketers are also increasing focus on the on-premise segment to boost trial and give consumers different ways to imbibe the marketers’ spirits.”

Mintel also recognizes the authentic value of both dark and white spirits. “The future seems bright for the dark spirits market as many brands tap into overarching consumer trends such as authentic craft products,” the research firm states in its November 2018 “Dark Spirits – US” report.

Premiumization likely will continue to drive the spirits’ category, Mintel notes. “Higher-end and super-premium brands will likely drive much of the future growth of the spirits market,” it says in its White Spirits report.

However, the extent of future growth will depend on if mass market consumers’ gain an appreciation for these brands, it warns.

As premiumization continues to occur, the market will need to figure out where it fits into a long-term trend toward lower alcohol consumption among younger consumers, Euromonitor’s Barry explains.

“Millennials and Gen Z are drinking less for a variety of reasons, and that poses a major challenge for the spirits industry long term,” he says. “I think the way to surmount that is to focus on value. Brands that focus on high volumes and low margins may be in some trouble in the years ahead, but for the industry overall as long as they are focused on creating high-quality, premium experiences in the spirits occasions that remain, I think they will be fine.”