Me & the Bee’s Lemonade celebrates 10 years of ‘bee-lieving’

Not many 12 year olds can say that they have pitched their business on TV’s “Shark Tank,” introduced then-President Barack Obama at the United State of Women Summit, who jokingly suggested he should work for her, and formed her own nonprofit, Healthy Hive Foundation, which is aimed at saving the honeybee and the food supply.

But it’s safe to say that social entrepreneur and philanthropist Mikaila Ulmer is no ordinary young woman. From a simple lemonade stand and using her great granny Helen’s flaxseed lemonade recipe, Ulmer, now 14, is the founder and chief executive officer of Austin, Texas-based Me & the Bees Lemonade.

The purpose-driven company offers ready-to-drink (RTD) premium “lemonade that tastes good and does good” in 12-ounce sustainable glass bottles in four flavors: Original with Mint, Ginger, Prickly Pear and Iced Tea/Lemonade. The clean-label, freshly squeezed lemonades contain no high-fructose corn syrup, no preservatives and additives, and blends honey with real lemon juice and flaxseed, which is rich in omega-3 fatty acids and antioxidants, the company says. The lemonades also are shelf stable and gluten free.

“Our most popular SKU is Prickly Pear,” Ulmer says. “We’ve come a long way from being available in a lemonade stand in front of my house, then a local pizza store and then Whole Foods Market in Austin, Texas. 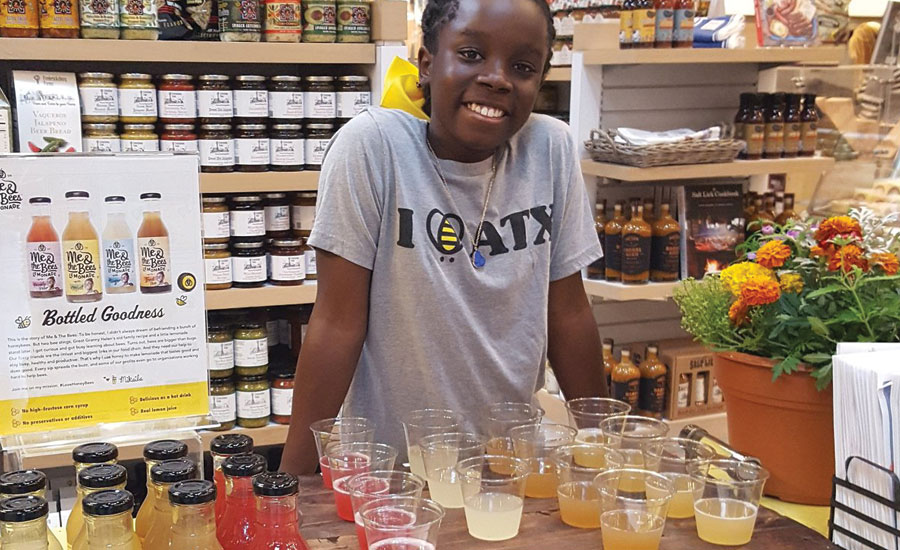 “Me & the Bees is buzzing off the shelves in 30-plus states from New York to California,” she continues. “I love my flavors because I use ingredients that are known to be both fun and functional. There are unique flavors like mint, which is a cooling agent; and half tea/half lemonade, which has antioxidants; and even prickly pear, which is known as an anti-inflammatory.”

Word of mouth and Ulmer’s passion, persistence and ingenuity has led to a distribution deal with UNFI, resulting in more than 360,000 bottles of the lemonades being sold annually in about 600 retailers, including Whole Foods, Wegmans, Gelson’s and Natural Grocers. A distribution deal with KeHe is in the works.

The family owned and operated company has grown 490 percent from when it first began 10 years ago, and would not have been possible without her family’s support, Ulmer says. In addition to her mother, D’Andra, the company’s chief marketing bee who helps with social media, events, story-telling and the family schedule, her father, Theo, serves as chief worker bee and handles finance and operations, purchase orders and logistics. Younger brother Jacob helps out with photography, while older brother Khalil assists with computer science, “but because he’s a junior in college, he doesn’t have as much time to spare anymore,” Ulmer says, laughing.

To respond to the growth of the company, Me & the Bees expanded its hive, which now includes three regional broker teams, representing 15 states and a new national sales team, she says.

Named one of Time’s 30 Most Influential Teenagers, Ulmer is a highly sought-after speaker, workshop facilitator and media presence whose story has been showcased in teenvogue, Ebony, “Good Morning America,” the “Today Show,” “20/20,” among many others.

Also worth noting is her 2015 appearance, where at the age of 9 on the aforementioned TV show “Shark Tank,” her passionate pitch resulted in a $60,000 investment from businessman Daymond John. Two years later, a consortium of former and current American football players invested more than $1 million.

Now known by many as “the Lemonade Girl from Shark Tank,” the high school freshman at St. Stephens Episcopal School in Austin, Texas, says she loves school and learning. Noting that she is fluent in Spanish, her other favorite subjects are math and science.

Although balancing a successful business at such a young age is hard, Ulmer credits her family, business partners, investors and customers for the company’s success. Although diminutive in stature, the 5-foot-tall spirited teen is well aware of the importance of serving as a role model for African-American teens and “really everyone” wanting to pursue their passion, she says. As a result, Ulmer soon will begin writing a book, she adds.

“This is pretty important,” Ulmer enthuses. “I receive a lot of mail from students and teachers who share with me that they follow me on social media (@MikailasBees, hashtag #girlpower) and they congratulate me on all the hard work. They often ask me to come visit their schools or organization to inspire kids.

“Balance is key,” Ulmer continues. “I get a lot of help from my mom. She helps manage my schedule and makes sure I have time for school, work and play.”

Bee-lief from the beginning

Although Me & the Bees Lemonade’s business and its ability to galvanize a generation of “bee-lievers” continues to thrive, Ulmer recalls that this journey started as the result of an unlikely and somewhat painful circumstance.

“In 2009, at the age of four, I got stung by two bees in one week, and became super afraid of the bees or anything that buzzed,” she says. “My family, who are big on outdoors, asked me to do research on the bees in hope that I would not be afraid of insects — and that I would return to gardening in our back yard. So I listened to my parents and we started to do research on honey bees. I learned so much about the littlest and biggest insects in our food chain. Most importantly, I learned that they were dying at an alarming rate and that I wanted to save them.

“As I thought about how I was going to save them, two more important things happened,” she continues. “I signed up for a Children’s Entrepreneurship event and my great granny Helen sent me her 1940s cookbook with her flaxseed lemonade recipe. It hit me all at once. I would sign up for the entrepreneur event, use my great granny Helen’s recipe, sweeten it with honey and call attention to the plight of the bees. For several years, I would sell my lemonade at different events and many times, in front of my house.”

Inspired by her mom and dad, Ulmer says she always shared her profits with organizations helping to save the honey bees. “My motto was and is ‘give, save, spend,’” she says.

During the past 10 years, the company continues to donate time, money and resources to several organizations like Heifer International, which provides gifts of honey to needy families worldwide; the Texas Bee-Keepers Association, which supports ongoing research through Texas A&M University on the preservation of bees in the state of Texas; and the Sustainable Food Center of Austin, a nonprofit that helps to strengthen the local food systems and provides access to nutritious, affordable food.

In addition, Ulmer’s nonprofit Healthy Hive Foundation has funded the establishment of an apiary and creating viable beehive colonies. She also has taught more than 100 bee-keeping classes in which thousands of bee-friendly seeds have been planted.

Me & the Bees Lemonade continues to donate 10 percent of its net profits toward saving and growing the honeybee population, the company says.

The plight of the honeybees and sharing the story of her fuzzy friends and their vital link to the food chain is embedded in Me & the Bees Lemonades’ social consciousness. “More than 40 percent of commercial honey bees in the U.S. have been lost,” Ulmer explains. “At this rate, bees will cease to exist by 2035. The loss of a species is tragic. The loss of critical food worldwide is significant. And economically speaking, bee pollination is worth $15 billion to the U.S. farming industry alone.”

Because her mission to help the bee species has opened up many doors, Ulmer admits choosing from among “so many cool” experiences is hard. “I loved speaking at the United State of Women and introducing President Obama. I also loved debuting my new big yellow booth at [Natural Products] Expo West in 2018. I met so many people, poured so many cups of lemonade and closed a few retail deals. I had so much fun, traveling to all the booths at Expo West and getting enough snacks and goodies for months,” she says, laughing.

Ulmer says she’s exited to return to Expo West in March and notes that her company will be part of the Hot Products Pavilion and located at booth N1307. There she plans to unveil a less-sweet lineup of her lemonades. The company also is launching an all-natural and organic herbal Lip Balm featuring moistening beeswax, she says.

With Ulmer at the helm, the future looks “bee-utiful” for Me & the Bees Lemonade. “I never thought for one minute that the bee stings … and of course listening to my parents to do research, would lead me on the path to discovering my passion and purpose,” she says. “Fast-forward to 2019, 10 years later, and I am so proud to celebrate being in business for 10 years.

“You can ‘bee’ sweet and ‘bee’ profitable. You do not have to choose,” she continues. “I started at a very early age, using my business and profits to save the honey bees. I never stopped ‘bee-lieivng’ in my dreams.” BI

Me & the Bees CEO releases book about company, saving honeybees