If asked to name a popular alcohol trend as part of a “Family Feud” survey, it is more than likely that Steve Harvey would announce that American whiskey is No. 1 on the leaderboard. The spirit’s segment’s dollar and case sales document steady growth in year-over-year comparisons.

For example, the Washington, D.C.-based Distilled Spirits Council reported that in 2017, American whiskey sales were up 8.1 percent, or $252 million, to $3.4 billion. This growth can be credited to the number of super-premium and ultra-premium brands that have proliferated the market. However, achieving success in a crowded market is a task that goes beyond producing a quality product, and is one that Stillhouse Spirits Co., Los Angeles, has been able to achieve.

“The American whiskey market is on fire and that isn’t slowing down anytime soon,” says Brad Beckerman, founder and chief executive officer of Stillhouse. “There has been and continues to be major investment within the category. There is a global demand for American whiskey, which we’re happy to be part of.”

Beckerman’s inspiration to launch Stillhouse didn’t come from wanting to create another “me too” product. Instead he decided to break the mold of what consumers thought they knew about American whiskey.

“From the inception in 2016, I set out to do something to break through the monotony. I wanted to create something dynamic and undeniably different, something that could be iconic; a company that felt established, that felt trusted and that was born in the USA. This is only the beginning. Stillhouse is not just an ‘Unbreakable Spirit,’ it’s a lifestyle.”

“From the inception in 2016, I set out to do something to break through the monotony,” he explains. “I wanted to create something dynamic and undeniably different, something that could be iconic; a company that felt established, that felt trusted and that was born in the USA. This is only the beginning. Stillhouse is not just an ‘Unbreakable Spirit,’ it’s a lifestyle.”

Part of what breaks Stillhouse away from traditional American whiskey is its packaging format. Although many brands opt for glass bottles, Stillhouse turned to stainless steel for its packaging inspiration.

“We recognized there was a tremendous opportunity to create something out of the box that had never been done before in the spirits business,” Beckerman says. “Stillhouse, America’s Finest Spirits, are encased in a one-of-a-kind unbreakable stainless steel can. We go where glass can’t — everywhere. While most try to fit in, we stand out.”

For many years, the American whiskey segment was synonymous with straight whiskey, barrel-age varieties. But as consumers get more adventurous, flavor options have resonated within the segment. Stillhouse is at the forefront of that trend.

“There’s no question that flavored whiskeys are helping to push the American spirits market; it’s attracting new customers, especially entry point consumers and women,” Beckerman explains. “It’s broadening the appeal to drinkers who tend to stay away from traditional whiskey and has become a gateway whiskey because of its approachability.”

At its inception, Stillhouse launched its line with six varieties: Original, Apple Crisp, Peach Tea, Coconut, Red Hot and Mint Chip. The decision to launch flavored whiskeys with its Original was a strategy that the company had decided to execute from the get-go.

“It was always the plan to launch Original and the flavors together,” Beckerman says. “Getting people to try something new is challenging; however, by offering a variety of flavors along with our award-winning Original Whiskey, the appeal widens.”

Although Original, Apple Crisp and Peach Tea are some of the brand’s top-sellers, Beckerman notes that the full lineup sells well and offers something for each taste profile.

“Apple Crisp and Peach Tea are perhaps more approachable flavors while Coconut and Mint Chip are both uniquely delicious as well,” he says. “All of our varieties are clear, all-natural and gluten-free each with a smooth finish. You can drink it as a shot, on the rocks or [in] a cocktail — they all taste great.” 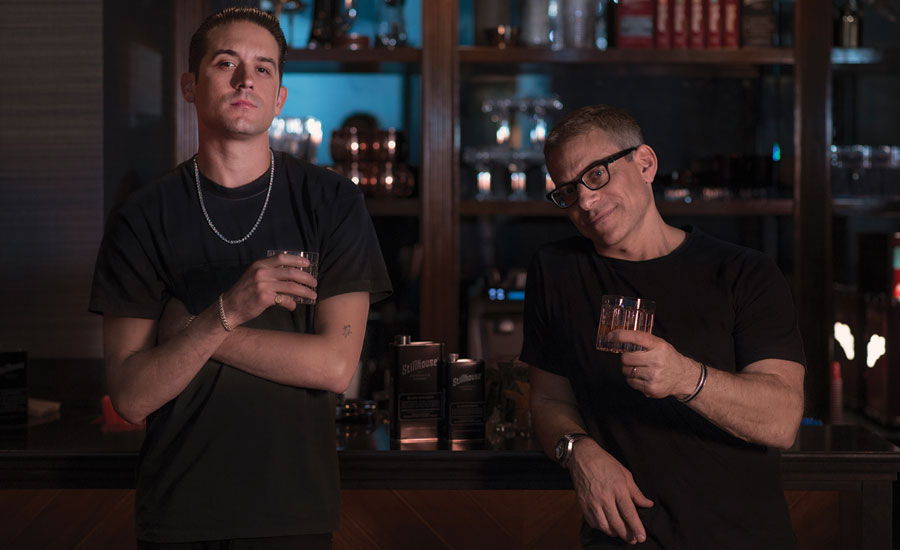 In fact, Mint Chip is a favorite of American rapper and producer Gerald “G-Eazy” Gillum, who also is an investing partner and co-creative director for Stillhouse.

“I love all the flavors,” Gillum says. “Mint Chip is my favorite, it’s incredible. I’ve never had anything like it so I was not surprised with the super positive response from fans.”

Gillum’s involvement with the brand is what Beckerman touts as a serendipitous encounter. “I was introduced to G-Eazy through my friend and music legend Gee Roberson, who also happens to be one of his managers,” he says. “When G and I first met, we bonded over so much ... sushi, Johnny Cash and whiskey.

“We just vibed, it was an instant connection,” Beckerman continues. “He’s authentic, charismatic and insightful. The energy that he brings to the table is infectious and he complements Stillhouse like no other.”

Gillum also highlights the genuine connection with Beckerman and the brand. “I’ve always been an entrepreneur and I’m also a whiskey drinker, so I felt it was natural [to] eventually got involved in this world as there’s so much potential within the space,” he explains. “The biggest thing is that people can tell if it’s authentic, and Stillhouse just fit with my own personal brand and vibe. So yeah, we met at dinner, there was a synergy and a connection; I knew I had to be a part of it and haven’t looked back.”

The official announcement of Gillum’s professional relationship with Stillhouse is near its one-year anniversary, and Beckerman notes that the initial year has been a relationship of platinum proportions.

“G’s impact has been phenomenal,” Beckerman explains. “He has lived up to his personal commitment and then some; I couldn’t have asked for a better partner. Our goals from the beginning were to elevate and leverage our brands together. Stillhouse goes perfectly within G’s lifestyle on and off stage. This has been amplified by the success of his current album The Beautiful & Damned featuring smash hits ‘Him & I’ with Halsey and ‘No Limit’ with Cardi B & A$AP Rocky, both of which have gone platinum.”

Given Stillhouse’s expertise when it comes to flavors, the company was eager to introduce Stillhouse Spiced Cherry as a limited release in 2017.

“We had been developing Spiced Cherry since we launched and it was always a team favorite,” Beckerman says.” It was just about timing but we knew we had an ace in the hole. We love the idea of limited-time offers to gauge people’s interest and felt that debuting Spiced Cherry as a limited release around the holiday season was the perfect opportunity.”

The new product was a hit in stores and with the readers of Beverage Industry. Initially, the limited-release whiskey won Beverage Industry’s Readers’ Choice: New Product of the Month poll for the month of November. It then was entered in the magazine’s Readers’ Choice: New Product of the Year poll, which featured the monthly winners throughout 2017. With 44 percent of the vote, Stillhouse Spiced Cherry was the clear winner of the yearly poll.

“It turned out to be a smash hit,” Beckerman says. “We were so pleased with consumers’ response. It was incredible — we sold out of our entire release in the first few weeks. It also felt really good when we won Beverage Industry’s Readers’ Choice New Product of The Year Poll … What an honor. It validated our own feelings about Spiced Cherry.”

Those feelings prompted the brand to bring Stillhouse Spiced Cherry back to consumers, but this time as a permanent addition.

“When we found out that [Spiced Cherry] was voted as your best New Product of the Year, Brad and I connected and within minutes it was decided [that] we’re giving fans what they want and bringing Spiced Cherry into the family, permanently,” Gillum says.

Yet, the return of Stillhouse Spiced Cherry is not the only addition to the American spirit brand’s portfolio. Most recently, it released its first bourbon variety: Stillhouse Black Bourbon.

“I can confidently say that our bourbon is unlike anything else on the planet,” Gillum says. “Whiskey and music have a long-standing relationship — they go together well. To celebrate the debut of Stillhouse Black Bourbon, we released ‘My Next Fix,’ an exclusive song download that you get with every can. The track has this vibe and energy — similar to the feeling I get when sipping on Stillhouse Black Bourbon. It’s smooth, dark, different and unexpected.”

Beckerman notes that “everything from the inside out” helps Stillhouse Black Bourbon not only stand out from the other whiskeys in the market, but even the Stillhouse lineup.

“We’ve taken our iconic stainless steel can, customized it in matte black and fitted it with a heavy duty solid steel cap,” he explains. “Stillhouse Black Bourbon breaks free from convention. It’s rested and mellowed in small-batch roasted coffee beans. The combination of the bold coffee beans and richness of the charred barrels results in soft aromatic notes of caramel and coffee, with a distinctly balanced body and a remarkably smooth finish. It’s a game-changing industry first.”

Lineup expansion is not the only growth that Stillhouse has on tap for 2018. Currently available in 35 states in America’s finest on- and off-premise outlets, Stillhouse is looking to expand its footprint in 2018.

“2017 was a stellar year for us — both our sales and market distribution doubled,” Beckerman says. “By the end of this year, we will be in all major markets across the USA and will continue to expand our footprint with duty-free, military and cruise line distribution. We are constantly being requested internationally and it’s something we are seriously considering.”

Given Stillhouse’s success in the past year as well as plans going forward, Gillum and Beckerman each are prepared for another adventurous year.

“There’s so much in the pipeline,” Gillum says. “Keep an eye on us for sure.”