The trend for professional athletes, weekend warriors and everyday consumers to be well-hydrated with more low-sugar, organic and natural options is contributing to stable growth in both the sports and protein drinks market, according to market analysts. Although blurring between the two categories continues to grow, many new functional beverages are marketing the benefits of those ingredients in a sports setting, says Scott Dicker, brand and retail client insights lead at Chicago-based SPINS.

“Many, though, are less likely to call themselves sports drinks; therefore, capturing the functional beverage consumer as well as the traditional sports drink consumer,” Dicker explains. “There also is a large increase in sports supplement drinks. Traditionally powdered performance supplements are evolving toward ready-to-drink (RTD) convenience options as well, such as pre-workout and amino acid drinks.”

The continued trend of non-athletes increasing their protein intake and wellness macro trends has broadened the appeal of sports and protein drinks, leading to “skyrocketing performance” for protein drinks, Dicker notes.

“Protein is being added to all sorts of drinks — to meal replacements for satiety, traditional muscle growth and recovery drinks, functional beverages as a better-for-you boost, [and] plant-based beverages, in particular, tout their protein content to compete with dairy counterparts,” he says.

Liquid and powdered protein and meal replacement products generated sales of $2.6 billion and more than $882 million, respectively, in multi-outlets for the 52 weeks ending Feb. 25, according to data from SPINSscan.

Kevin Weissheier, insights executive at New York-based Kantar Worldpanel, highlights the ascension of protein drinks as Americans look to beverages as a do-it-all solution in their busy lives. “As lives get busier, time to eat becomes scarcer, and this is a space that protein drinks can nicely slide into,” he says. “Satiation and health properties are two pillars that protein drinks are building off of. 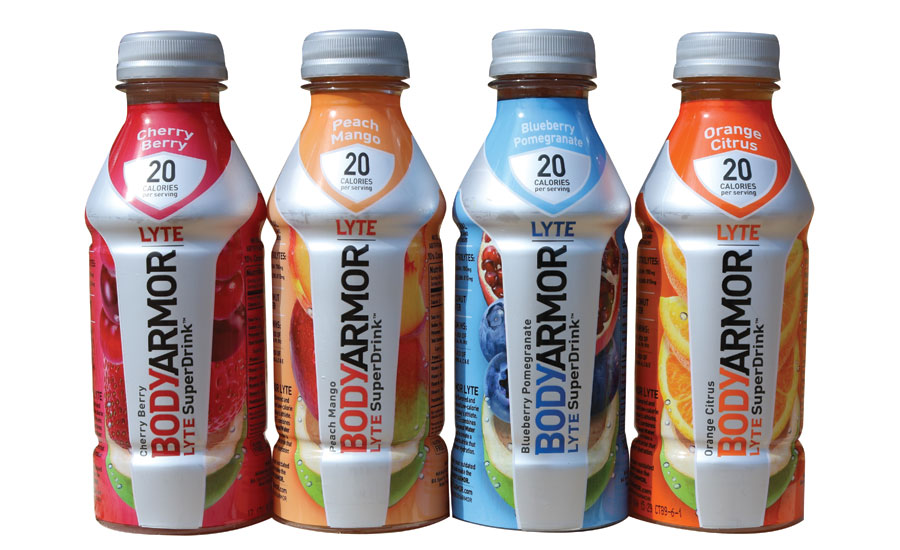 BodyArmor SuperDrink released a lowcalorie Lyte line this year that contains 20 calories and 3 grams of protein in each serving. (Image courtesy of BodyArmor)

“… For years, sports drinks have been an athlete’s go-to refuel option, and that is not expected to change anytime soon,” he continues. “But for the average consumer, they can be an on-the-go meal replacement that is so badly needed.”

Weissheier notes that the amount of protein contained in drinks used to be polarized. However, that is changing. “The beverage was either super high in protein or had none at all,” he explains. “That’s changed as middling options (10-20 grams of protein) have become more available, and consumers are taking to them well.”

In 2017, sales of nutrition and performance drinks remained steady at $14 billion, according to Chicago-based Mintel’s March report titled “Nutrition and Performance Drinks – US.”

Yet, the report also notes a slowdown in dollar sales of nutrition and performance drinks because of competing categories moving into the functional space, sometimes with cleaner formulations, inherent function and lower sugar totals.

Roger Dilworth, senior analyst at New York-based Beverage Marketing Corporation (BMC), notes a slight deceleration in the volume of sports drinks. “Sports drink volume actually decreased slightly in 2017 because of a big decline in Q3,” he says. “This may have been due to slightly cooler and wetter summer weather in comparison to recent years.

“Another factor is the demands of portfolio management that may have led to an innovation lag during the year,” he continues. “Growth and innovation did come from the No. 3 player, BodyArmor, but from a relatively low base that was not sufficient to counter the overall trend.”

Overall, the non-aseptic sports drinks category experienced dollar sales of more than $6.3 billion for the 52 weeks ending Feb. 25, but experienced a decline of nearly 3 percent during the prior-year time frame, the market research firm reports.

Yet, some brands have contributed to significant market share growth, albeit from a smaller base. Gatorade Flow and Whitestone, N.Y.-based BodyArmor SuperDrink posted strong year-over-year percentage increases of 3,103 percent and 170 percent, respectively, for the 52 weeks ending Feb. 25, based on IRI data.

“Gatorade and Powerade still make up 90 percent of the sports drink market,” Kantar Worldpanels’ Weissheier says. “To protect their share, they have rolled out options ranging from new flavors to organic to low sugar. As for new players trying to cut into their share, the one seeing the most success is BodyArmor. This brand, which boasts sponsorships with athletes Anthony Rizzo and Kobe Bryant, drives the idea of clean hydration. They have a lower sugar content, added coconut water and no artificial coloring. They have had success so far due, in part, to distribution from the large [Dr Pepper Snapple Group] (DPSG) network.”

For the protein drinks market, Weissheier cites Rebbl as one of the hottest protein beverages on the natural scene because most options contain about 16 grams of plant protein along with new age flavors made with turmeric and cold-brew coffee.

Sports and protein drinks aren’t the only products experiencing innovation and growth. Refrigerated coconut and plant waters saw sales of $52.1 million, a nearly 30 percent increase in multi-outlets for the 52 weeks ending Feb. 25, according to SPINSscan data. With sales of nearly $78 million, shelf-stable plant waters grew 5.3 percent, it adds.

Niche sports drinks segments, like coconut water, are being well-received by consumers, while liquid water enhancers have not fared as well due to their artificial colors and extremely concentrated format. “Coconut waters have seen massive success in the U.S. market as both a standalone drink and beverage add in,” Kantar Worldpanel’s Weissheier says. “The market has boomed in the past five years as consumers embrace its replenishment properties.”

SPINS’ Dicker adds: “Refrigerated coconut water continues to show solid growth. This functional plant water addition to the sports drink category introduces products with a more natural perception to sports drink consumers, and that contrasts with how the sports drink market has been positioned by brands and perceived by consumers in the past. In addition to coconut water, other plant waters such as watermelon water are entering the market with benefits of high citrulline levels for sports consumers.”

The Netherlands-based Innova Market Insights notes that the United States has the most developed sports nutrition market in the world, accounting for more than 30 percent of global launches in the 12 months ending October 2017. The sports powders subcategory accounted for nearly 70 percent of the total, it adds.

Sports and protein drinks, particularly for non-athletes, will continue to drive the market, but beverage-makers should be aware of consumers’ wellness goals, including the need for organic products and high transparency, SPINS’ Dicker says.

“[H]ighly caloric drinks with lots of sugar don’t match the consumers’ wellness goals, so lower-sugar options are definitely a key factor in sports drinks’ future, as well as other functional ingredients such as amino acids or herbal ingredients for those other health purposes consumers pursue when they choose a sports drink for general wellness,” Dicker says. “… All beverage categories are jumping on the protein trend. Coffee Iconic & Super Coffee, even alcohol muscle vodka. There isn’t a segment of beverages that isn’t emerging with high-protein varieties.”

"On the one hand, the paleo movement seems to be growing in scope; on the other hand, there already has been lots of marketing around protein, so the danger is that the message will begin to be ignored," he explains. "That being said, the protein drink segment should continue to grow in the mid-single-digits."

SPINS' Dicker suggests that the biggest emerging market for protein drinks is the aging population.

"Aged-related sarcopenia causes a decrease in muscle mass, leading to increased chance of falls," he explains. "... Protein drinks can play a big role in preserving muscle mass in the aging population, so there may be a sizable opportunity for brands to educate and position themselves to this community." BI