As consumers turn to products with less sugar, some traditional beverage categories have seen the effects. That trend along with the rapid growth of bottled water and the popularity of energy drinks are impacting the $16.6 billion juice sector, which experienced a year of declines as dollar sales fell 7.5 percent and units slipped 12 percent, according to Susan Viamari, vice president for Thought Leadership at Chicago-based Information Resources Inc. (IRI). 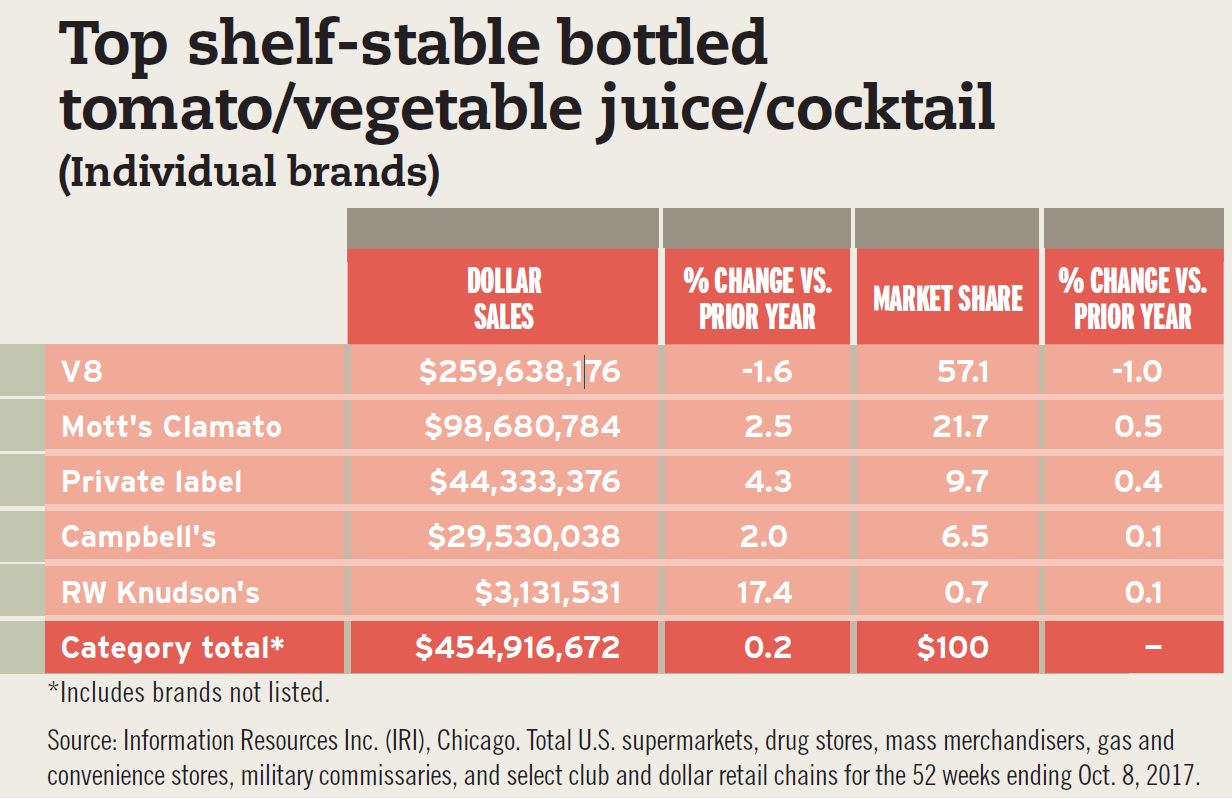 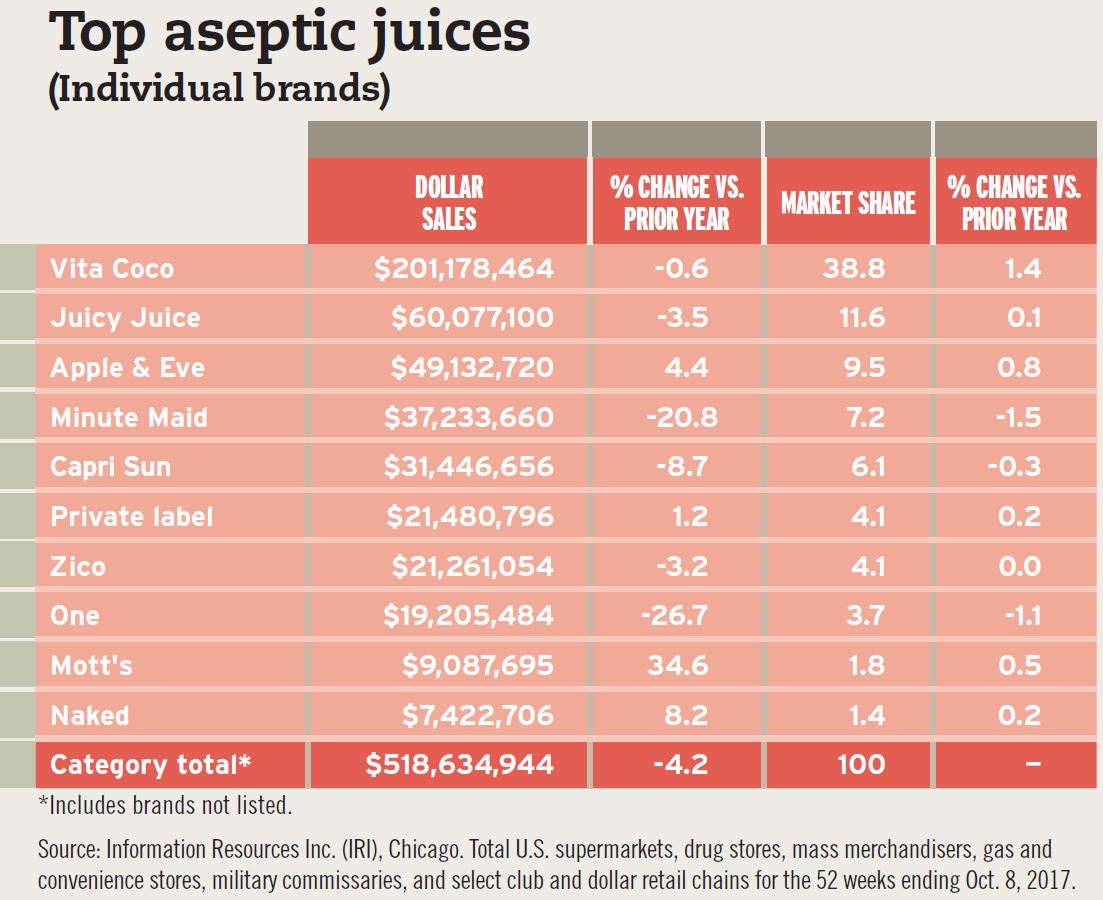 Due to concerns about the high sugar content of juices, per capita consumption fell from 47 liters in 2002 to 33 liters in 2016, according to Chicago-based Euromonitor International’s February 2017 report titled “Juice in the US.”

“As noted in ‘Juice and Juice Drinks – US,’ October 2016, 100 percent juice may be pigeonholed as just a breakfast beverage. Additionally, juice drinks may deliver more flavor and excitement, meaning consumers may choose juice drinks over 100 percent juice,” the report states. “While 100 percent juice contains natural ingredients, its high sugar content may prevent more frequent consumption. Changes to nutritional labels may work in favor of 100 percent juice, but the segment faces a difficult uphill battle to increase sales.”

Looking ahead, Mintel’s report forecasts the juice market will reach $20.8 billion in sales by 2021; however, this will reflect a decrease of 7 percent from 2016 to 2021 time period.

Although the juice and juice drinks market has experienced losses in consumer penetration, the declines have begun to flatten out says Kevin Weissheier, consumer insights executive at New York-based Kantar Worldpanel. .

“[O]ver the past year, consumers have increased their education around fruit-based beverages and are more willing to look past the higher calories for the nutritional benefits that come from them,” Weissheier explains. “While orange juice has been in a rather steady decline, there has been a notable increase in lemonade consumption. Consumers are turning to lemonade, referencing its cleansing and purifying properties (some of which are ‘Yogi Community’-driven) as an alternative to typical consumption.

“In addition to lemonade/lemon (which is more fruit drink-focused), cran blends, coconut water and grapefruit have grown their share,” he continues. “These three options fit into America’s growing desire for ‘functional health’ — whether it is in the form of internal purity, hydration or cleansing.”

The consumer shift toward products with healthy, natural and functional attributes is impacting the juice and juice drinks category, analysts note.

“Health and wellness cuts two ways for juice,” BMC’s Hemphill says. “On the one hand, consumers appreciate that the products are natural and agriculturally based, but they also are generally high in sugar and calories as well as premium priced.”

Yet, premium juices, which tend to be lower in sugar content, organic and natural, are getting a boost from their healthier-for-you positioning, IRI Viamari says.

“Super-premium [juice] is a strong point in the industry, with momentum provided by probiotics and teas and thirst-quencher drinks,” Viamari says. “Consumers are looking for healthier options. While juice is seen as healthier than other beverages, such as carbonated soft drinks, there is still concern about the sugar content in juice. For this reason, ‘other juices’ is seeing the strongest growth. ‘Other juices’ includes healthier alternatives, such as coconut water, natural/organic juices, [and] lower-sugar options like juice/tea or fruit/veggie blends. There is also a movement toward more simplified ingredients, such as products that have no high-fructose corn syrup, no preservatives, no artificial flavors, etc.”

Ready-to-drink teas, like kombucha and other drinks that provide probiotics, are seeing a lot of momentum because they provide a low-sugar, natural and refreshing energy or nutritional boost, Viamari adds.

Mintel’s report notes the many growing brands within the juice drink segment are hybrid beverages and specifically highlights carbonated juice drinks. “The simple addition of carbonation may make a juice more appealing for non-morning dayparts,” the report states. “One example of this is Ocean Spray Sparkling, a canned sparkling juice drink.”

The rise of cold-pressed juices within the premium juice segment also is presenting opportunity, according to Euromonitor’s report. “Areas of opportunity in the juice category have been seen, particularly in the premium segment via ‘raw juices’ (unpasteurized), cold-pressed, or [high-pressure processed] (HPP) juices, fringe juices like coconut and other plant waters and juice smoothies,” it states. “While also affected by high sugar content, the natural and healthy positioning of these juices has enabled them to prosper, driving up [the] average unit price by 2 percent in 2016.

“Coconut water, once a relatively niche product appealing only to health food aficionados, is now well-established in the juice aisles of popular retailers,” the report continues. “Coconut and other plant waters reached value sales of $889 million, up from just $217 million in 2011.”

According to BMC’s DrinkTell database, in 2016, volume in the long-stagnant total fruit beverage market grew by 0.4 percent — its first gain in more than a decade — and the super-premium juice segment grew by 8 percent. “These juices are perceived as more healthy than run-of-the-mill fruit beverages and, thus, mitigates somewhat the perception of fruit beverages in general as being calorie-laden,” the database states. 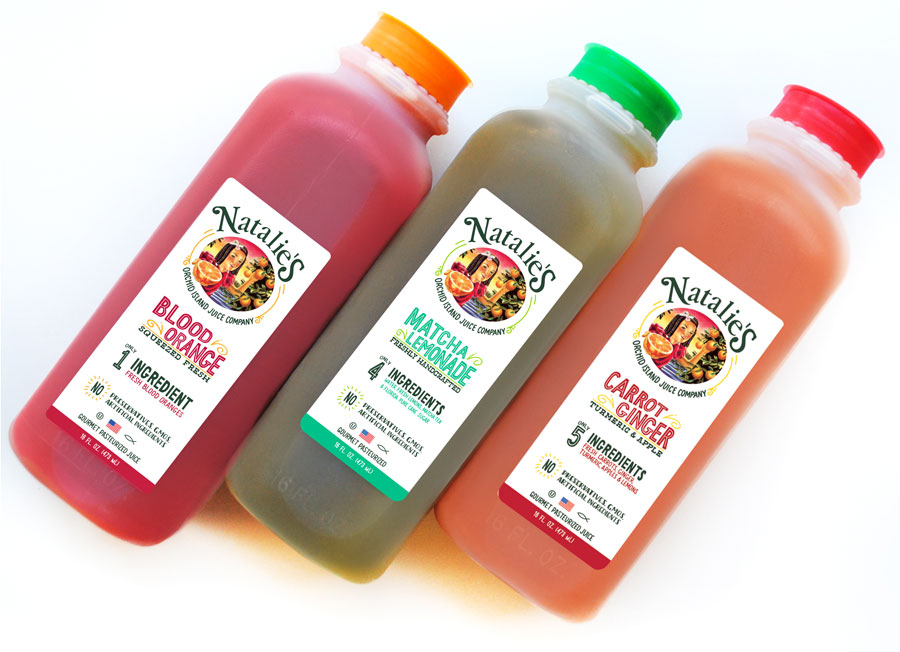 Other companies, like Concord, Mass.-based Welch’s are touting the non-GMO, no-sugar-added and heart-healthy benefits of its 100% Grape Juice in new packaging that hit store shelves in 2017. 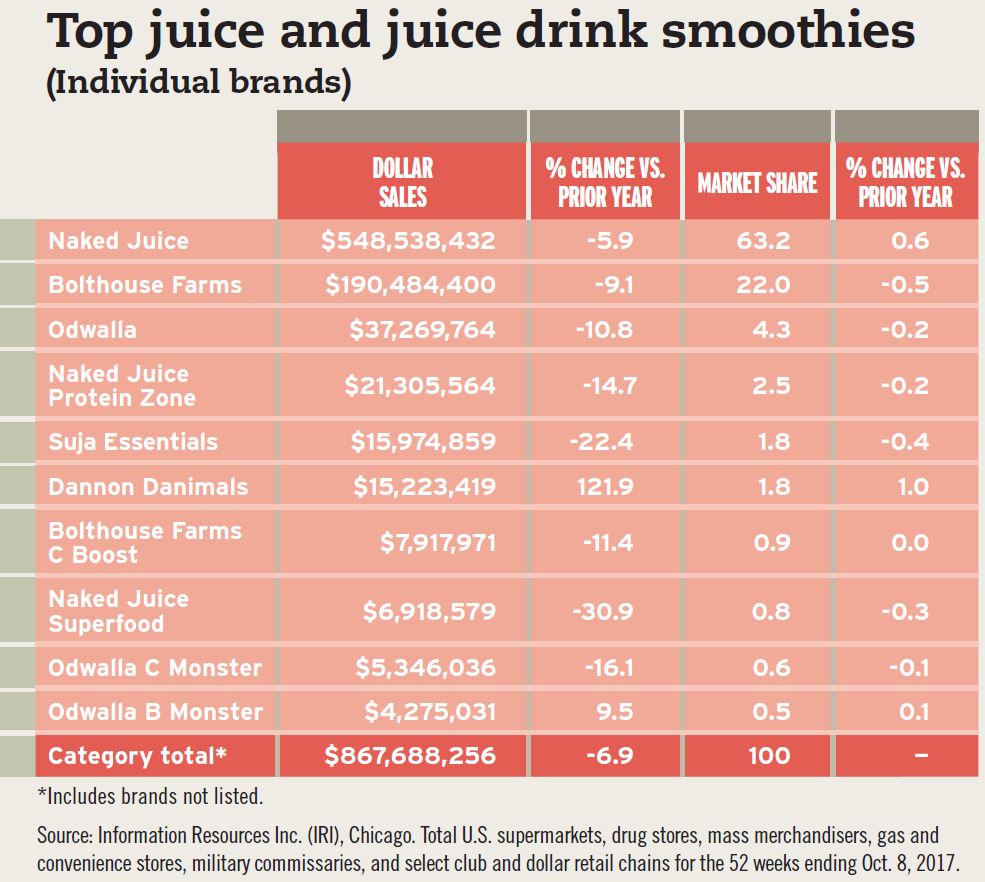 In addition to new products and packaging, the juice drinks category is benefiting from healthy, clean-label focused products. Juice smoothies have been a growth opportunity for the category, albeit from a smaller base, in recent years, Mintel’s report notes.

“Smoothies remain one bright spot in the juice market; however, the bottled smoothies segment is forecast to slow down over the next few years,” the report states. “Like regular juice, bottled smoothies compete with a variety of different beverages such as performance drinks, dairy-based smoothies, ready-to-drink (RTD) soup and even smoothies from foodservice. Smoothies are also consumed less frequently than 100 percent juice or juice drinks, suggesting that it may be an occasional purchase as opposed to a household staple.

“… While smoothies have experienced a strong increase in sales, it still represents less than 6 percent of the juice market,” the report continues.

Kantar’s Wiessheier also highlights the “pleasant addition” of juice smoothies to the category. 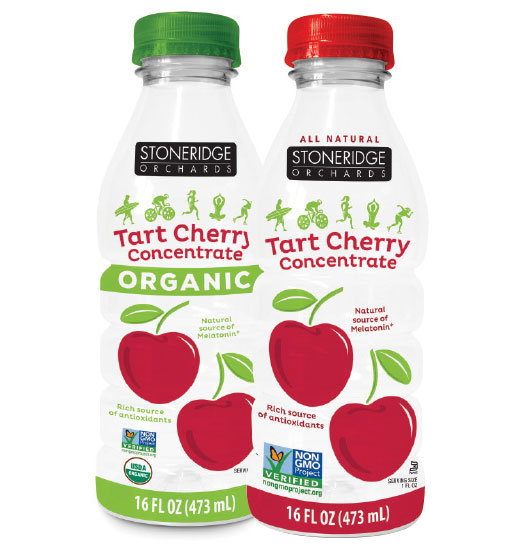 “While they used to be rather novel, consumers are now working fruit and vegetable smoothies into their daily routines,” he explains. “They see these options as a healthier yet tasty change to the norm, and smoothies have served as a ‘vessel for functional health and wellness’ as is seen in smoothie bars around the country.”

Refrigerated smoothies aimed at children also are resonating. For example, Dannon Danimals kids’ yogurt and smoothies had triple-digit sales growth of nearly 122 percent and sales of $15.2 million in U.S. multi-outlets for the 52 weeks ending Oct. 8, 2017, according to IRI data.

Additionally, Purchase, N.Y.-based PepsiCo’s Naked Juice, with 63 percent market share, is No. 1 in the juice and smoothies category, amassing sales of more than $548 million in U.S. multi-outlets for the same time period, the data indicates.

Consumers’ demand for clean-label and functional refreshment continues to impact not only the juice and juice drinks category, but the entire food and beverage market, Kantar’s Weissheier says.

“Functionality, which is a major buzz word in the food and beverage community, has also played a role in fruit juice and drinks’ revival,” he explains. “Consumers want more from their beverages — energy, alertness and hydration for instance — and are turning to their drinks to do so. The HPP movement has played a large role. Consumers can feel good about what they are putting into their bodies.

“… By cold pressing, juice is able to be cleansed via pressure, which not only keeps the nutrients but also produces a smoother, fuller beverage taste,” he adds. 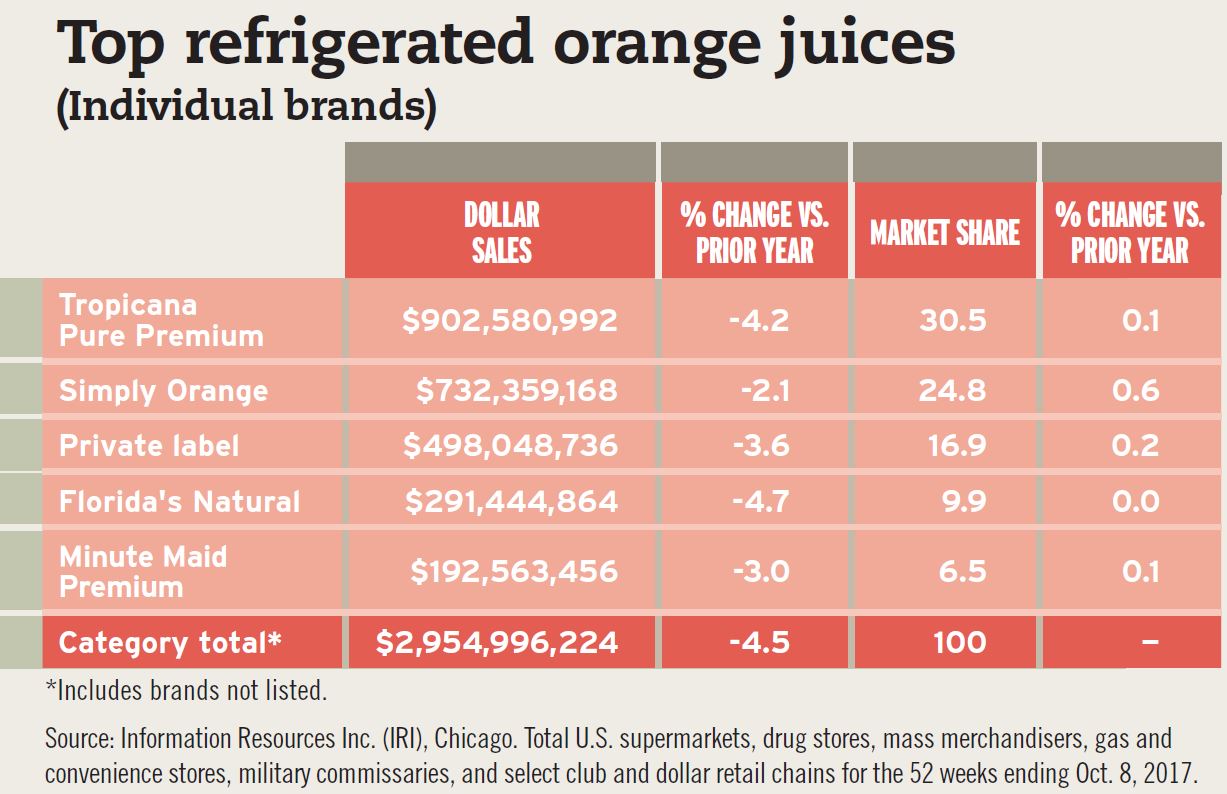 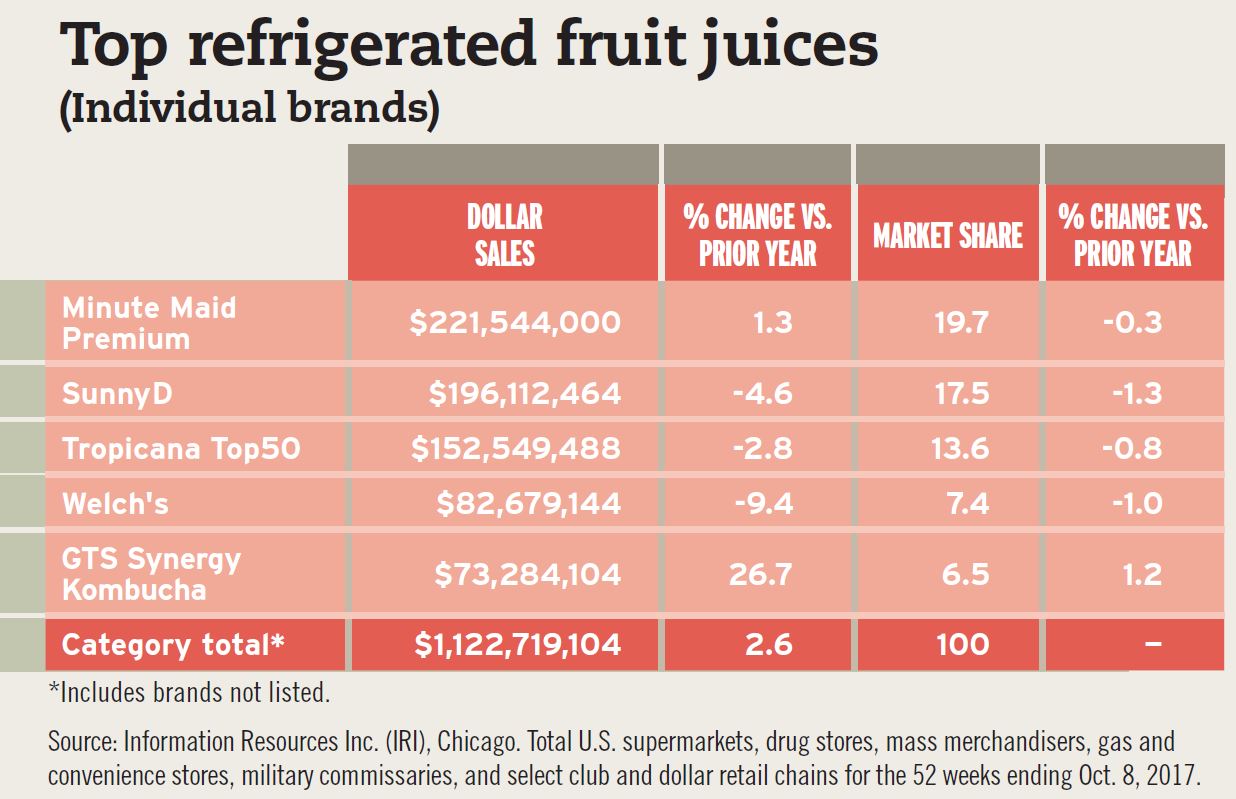 In order to appeal to consumers’ desires for healthy beverages, juice manufacturers should spotlight attributes that will entice those health-focused shoppers, experts note. “Juice drink manufacturers will need to innovate their products to promote any and all health benefits and ‘call out’ better-for-you ingredients such as no/low sugar or free from artificial colors,” Nielsen’s Rost says.

Although 79 percent of shelf-stable juice drinks contain added sugars, Rost suggests the use of natural alternative sweeteners may create opportunity for beverage-makers.

“Sweetening products with added sugars is still a mainstream practice, but the data show that consumers care about the glycemic index in products,” he explains. “This creates opportunity for manufacturer innovation by using alternative sweeteners. For example, organic cane sugar syrup, organic agave nectar, honey, chocolate and vanilla extracts are just a few examples … that can be used to sweeten products and still keep within the low glycemic range.

In the future, juices with exotic flavors and the addition of fruit juice to other products might help the category resonate, Kantar’s Weissheier says. “Future innovation is looking toward adding fruit juice to other categories,” he says. “For instance, we’ve seen fruit juice added to sparkling water, tea and now coffee is on the rise. Fruit juice can offer a clean yet unique flavor profile that would fit nicely with many categories.” BI