When crafting a beverage package, brands will create a label design that highlights the product attributes and showcases colorful imagery. However, in 2017, more beverage companies decided to use their label designs to put a spotlight on the creative artists that are captivating consumers.

In Beverage Industry’s annual Best Packages poll, the editors selected 10 package designs across the alcohol and non-alcohol beverage markets. Voting took place from Oct. 13 to Nov. 3 on bevindustry.com with more than 1,400 readers casting votes. Below are the top performers:

In early 2017, Perrier Sparkling Water, a brand of Stamford, Conn.-based Nestlé Waters North America, announced that it had named its 2017 Perrier Artist of the Year: Eric Rieger, also known as HOTTEA.

“Earlier this year, artist Eric Rieger, aka HOTTEA, was named the 2017 Perrier Artist of the Year through the brand’s ARTXTRA initiative,” says Allison Walker, brand manager for Perrier. “This program engaged three emerging contemporary artists to create original packaging designs and invited consumers to select the winner by voting online. HOTTEA’s striking geometric design inspired by his typographical installations was voted the winner, and his custom design hit shelves in October 2017.”

At the time of the announcement, the Minneapolis-based artist stated: “It is an honor to be named the Perrier Artist of Year, and I’m so pleased to have received such a positive response to my design. The Perrier ARTXTRA program has been an incredible opportunity to showcase my work to a wider audience, and I look forward to seeing my work featured as a limited-edition design later this year.”

The readers of Beverage Industry also found favor with this artistic packaging as 42 percent of the readers voted for the limited-edition Perrier Sparkling Mineral Water bottle, making it Beverage Industry’s Best Package of 2017.

Perrier Sparkling Mineral Water was motivated to embark on the Artist of the Year contest because of its historic connection with artists and packaging designs.

“Perrier has a long, rich history of collaborating with visionary and acclaimed contemporary artists — everyone from Salvador Dali to Andy Warhol,” Walker says. “The Perrier ARTXTRA program was created to help build on this storied legacy, offering emerging creatives a dynamic platform for showcasing their work. Additionally, it granted the brand the ability to engage with consumers in a new and meaningful way, as their participation in the selection process helped name our first-ever Perrier Artist of the Year.”

Walker notes that the HOTTEA-designed packaging will be available for purchase through early 2018 in a variety of packaging formats. “Consumers can purchase the eye-catching products in all of Perrier Original flavor formats — slim can, PET and glass bottles,” she says.

However, consumers should expect more to come from the sparkling water brand, including partnerships with today’s hottest artists as well as HOTTEA throughout the current campaign.

“Perrier is always exploring new ways to support the arts community and already has plans to unveil additional artist-designed packaging in the U.S. in 2018,” Walker says. “Further, HOTTEA and Perrier will co-create an extraordinary and immersive art installation inspired by the packaging designs at 29Rooms — Refinery29’s fun house of style, culture and technology brought to life by global artists and visionaries. The event [opened] to the public on Dec. 7, 2017, in Los Angeles.” 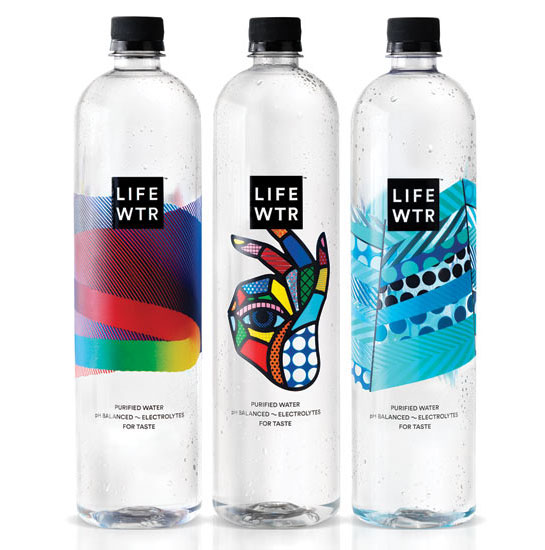 Highlighting modern-day artists also is a focal point for the second-place finisher in the 2017 Best Packages poll. Receiving 41 percent of the vote, LIFEWTR, a premium water brand of Purchase, N.Y.-based PepsiCo Inc., was a close second.

Launched in February, LIFEWTR uses its label to act as a platform for emerging artists, the company says. As part of the exposure, labels are released in groups of three that change throughout the year. This year, three different series were released.

“Our LIFEWTR artists will turn the traditional bottle label into a unique masterpiece that speaks to the creativity — and source of creation — linked to the brand’s core,” said Brad Jakeman, president of the global beverage group for PepsiCo, in a statement leading up to the official launch.

The Series 2 labels focused on elevating women in the arts, the company says.

“We’re proud that the LIFEWTR Series 2 labels will feature designs made by some of today’s most talented emerging female artists,” said Todd Kaplan, vice president of the water portfolio for PepsiCo North America Beverages, in a statement at the time of the Series 2 launch. “We admire the fact that these women are a diverse group of innovative thinkers — contributing unique and fresh forms of art to the world. They have the potential to influence culture in an impactful and positive way, and it’s important we celebrate women in the arts and provide them with a platform to gain exposure and showcase an inspirational outlook.”

Trudy Benson, Lynnie Z and Adrienne Gaither were the three artists who designed the Series 2 labels.

For the Series 3 labels, LIFEWTR partnered with the Council of Fashion Designers of America (CFDA) on a wide-ranging, multi-faceted global collaboration to help emerging fashion designers make their mark in highly competitive national and international markets, it says.

Through this partnership, three participants of the CFDA+ spotlight program, Adam Dalton Blake, Tiffany Huang and Ghazaleh Khalifeh, were given the opportunity to have their bespoke designs displayed on nearly 40 million bottles of LIFETWTR for its Series 3 labels, the company says.

“Beyond being a source of hydration, LIFEWTR is a brand committed to giving a platform to emerging creative talent to be discovered, helping them bring to life their long-term aspirations and inspire their audiences. We are very excited to partner with CFDA as our purpose perfectly aligns with its mission to advance fashion by helping talented emerging designers to break through,” said Olga Osminkina-Jones, vice president of hydration for PepsiCo’s Global Beverage Group, in a statement at the time of the announcement. 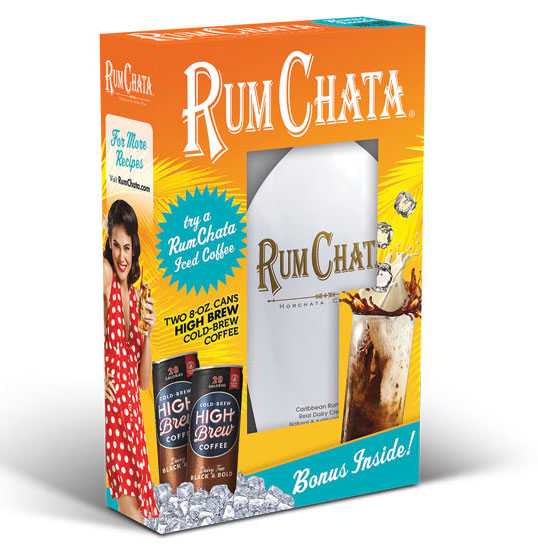 When designing limited-edition packaging, beverage-makers also are partnering with other brands to expand their market presence.

“A Black and Bold RumChata cocktail has been a favorite of the High Brew team for a while, which makes this partnership great for us,” said David Smith, founder and chief executive officer of High Brew Cold Brew Coffee, in a statement at the time of the launch. “At High Brew, we like to work hard and play hard, so we loved the idea of helping create a delicious cocktail with RumChata this summer. We knew if our team was already enjoying the drink, there would be many others out there who would as well.”

“Whether it’s face-to-face or on social media, we constantly hear from RumChata fans how much they love RumChata in their coffee. So pairing it with High Brew this summer was an organic partnership that our customers have been already doing on their own at home,” said Tom Mass, RumChata founder and master blender, in a statement. “By packaging everything together, it makes it simple for everyone to enjoy this delicious cocktail concoction, as well as introduce new audiences to the possibility of using cold brew as a mixer with RumChata.” 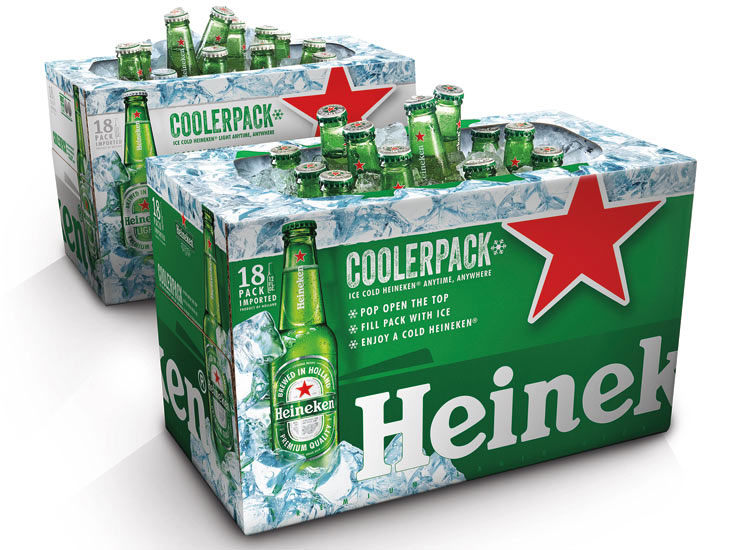 Innovation among secondary packaging also remains important for beverage-makers. White Plains, N.Y.-based Heineken USA, demonstrated this with the development of the COOLERPACK, an engineered 18-pack cardboard packaging innovation that allows consumers to chill their Heineken by removing the top of the case and adding ice.

In the 2017 Best Packages poll, this functional innovation finished fourth by obtaining 2 percent of the vote.

Designed to pop open the top, fill the pack with ice and chill Heineken, the COOLERPACK was created to keep consumers cool in the heat and drive incremental sales and profits for retailers that stock and display the innovative new item, the company stated when the product was released just before summer.

“Shoppers buy beer with occasion top of mind, and they will select the store that best fits their intended occasion,” said Ray Faust, chief sales officer at Heineken USA, in a statement, citing the Added Value Foundational Shopper Study 2011. “We are excited to be bringing this new pack to retailers’ on-the-go drinking occasions and just in time for summer.

“With convenience top-of-mind, most consumers shop on their way to an occasion, with two-thirds indicating they will drink within the hour,” Faust continued, citing the Added Value Foundational Shopper Study 2011. “Heineken wants to be the brand that facilitates this consumer need.

“Moreover, large pack sizes (12-plus) represent most of celebration and casual-gathering occasion volume, and most purchases come from the cooler, underscoring the importance of maintaining temperature,” Faust added, citing the Added Value Foundational Shopper Study 2011 and Envirosell In-Store Observational Study 2012.

To round out the Top 5, a four-way tie took place among Van Gogh Vodka, Marlborough Sauvignon Blanc and Rosé, Viniq Shimmery Liqueur, and Lord Calvert Canadian Whisky, which all obtained 1 percent of the vote. (Please note total votes might not equal 100 percent due to rounding). BI