“We know through all of our research … that a kid is not [just] a kid,” says Carl Sweat, chief marketing officer of In Zone Brands Inc., Atlanta. To recognize the 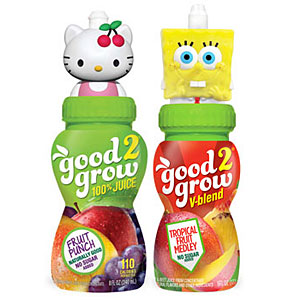 various levels of childhood, the company’s good2grow brand segments kids into three age segments, with specific products and packaging geared toward each.

The first segment is children under the age of 2, Sweat explains. Because pediatricians recommend a maximum serving size for juice of about 4 ounces for this age group, good2grow offers special 4-ounce bottles for these little consumers, he says. The characters affixed to the patented Sippa tops on these bottles also are more geared to the interest of this age group and are more “baby- or toddler-looking,” he adds.

The 3- to 7-year-olds have their own set of characters that appeal to their interests, Sweat says. In addition, packaging for this age group is 2 ounces larger to accommodate their growing appetites, he adds.

Both the 4- and 6-ounce packages are equipped with spill-proof Sippa tops that release juice as the child sucks the spout, Sweat explains. However, for the older children in the brand’s consumer demographic, which typically includes children as old as 10 or 11, good2grow offers a Sippa sports top on its 8-ounce packages, he says. “The older kids don’t feel like they need the spill-proof top, and we acknowledge that,” he explains. “As their independence grows, moms can give them more of a sports top.” The tops are resealable and include the same characters that these consumers have grown up loving, Sweat adds.

Beyond these efforts to customize the functional packaging, good2grow heavily researches the characters it includes on its collectible, reusable Sippa tops. “Kids want to be able to choose and personalize what Sippa top it is that they like,” Sweat explains.

The brand researches characters that it doesn’t already have in its Sippa collection, reviews their TV ratings, and checks out their Q scores, an industry standard for measuring consumer appeal, to gauge what characters are popular now and are going to be popular in the future, Sweat explains. Because it takes about 9 months to develop and commercialize a topper, the brand often has to make bets about which characters are going to be popular down the road, he says.

“A year ago, not too many people knew about Sofia the First, one of the newest Disney princesses aimed at the junior side of their franchise,” Sweat offers as an example. “We knew about her, [and] we made the bet that she was going to be successful based on the insights and meeting with Disney personally so that we could understand how they were going to support the show [and] what they saw in the character from their market research. … She turned out to be unbelievably strong.”

The variety of characters available for the beverages has encouraged some consumers to collect them, with the average good2grow consumer having about five tops at home, Sweat notes.  “It’s a wonderful thing when consumers get so engaged with your brand that they want to pursue it on their own as a hobby,” he says.

Good2grow is taking this collectables approach into consideration as it prepares to launch its Teenage Mutant Ninja Turtles (TMNT) top in concert with the summer movie, Sweat says. In the July-August window, the company initially will launch tops for three of the four turtles. Shortly thereafter, the fourth turtle top will be released in a special shipper that will be available at select retailers that support the brand with special displays. This will give these supportive retail channels an extra benefit, as consumers will likely be hoping to pick up that fourth turtle to complete their collections, Sweat says.

The character tops have helped make the brand endearing to both children and parents, Sweat notes. Millennial moms are drawn to some of these characters that they knew growing up and want to share them with their children. “These millennial moms today who grew up with [Disney’s] Ariel are able to share that moment not only through the video but through merchandise … [and this] really creates a wonderful opportunity for sharing among moms and daughters,” he says. In its early consumer research, good2grow has seen the same sentimental moments happen with the TMNT franchise, he notes. A mom might choose to pick up a beverage with her husband’s favorite turtle so he can share that moment with his son or daughter, he explains. “It’s a special connection,” he says.

2021 State of the Industry: Tea’s versatility, healthfulness appeals to the masses

Cognitive health appeals to all demographics