In Zone Brands rebrands as good2grow

Growing up from its former TummyTickler and BellyWashers kids juice brands, In Zone Brands Inc., Atlanta, combined the sibling brands into one and rebranded them under the universal brand name good2grow. The result is a better-for-you juice brand that incorporates lessons learned from the company’s more than 12 years of experience in the market. The new brand identity made its debut at retail at the end of January. 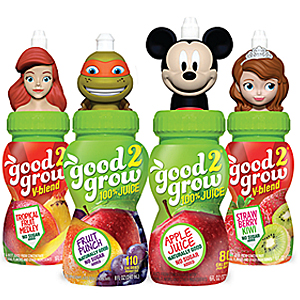 Through market research, In Zone Brands discovered that a sub-segment of the consumer population, which the company calls “Healthy Hoverers,” was not interested in the original 100 percent juice brands, explains Chief Marketing Officer Carl Sweat.

“There’s a group of moms that are a little better educated, have a little bit higher income, they tend to be label readers, and they wouldn’t want to pick up our previous products because [they said] it almost looked like candy,” he says.

To combat this, In Zone Brands worked to find that balance between fun — its bottle toppers — and wellness.

In support of the rebranding, good2grow’s labels, website and social media channels are communicating the company’s mission of providing healthy drinks for kids while making healthy choices fun. “We wouldn’t put things in the bottles that we wouldn’t give our kids, and we want [consumers] to have the same confidence by virtue of the new branding,” Sweat says. In particular, these mediums are calling out aspects of the brand that existed with TummyTickler and BellyWashers but were not as important to consumers when those products launched, he notes. “[We want to make] sure that moms understand that we are BPA-free in our bottles and our toppers, [and] we are non-GMO. … We have really taken great pains to make sure that we have addressed a lot of the information that moms really want to know about in this better-for-you space.”

Early feedback of the rebranding garnered from market research among In Zone Brands’ core consumers has been positive, Sweat notes. “We were gratified to find that our core users liked the new branding more than even the new users,” he says. “As we talked to them, [we found out that] it was because all along those people knew what was inside the bottle was 100 percent juice, and they felt good giving it to their kids.

“They now feel with good2grow that they can sort of brag about that,” he continues. “Now it’s almost like we caught up to them, where they already were in terms of appreciation for the product. Now the brand lives up to what they already saw in the product.”

Beyond growing to fit the standards of consumers, good2grow positions the brand for further growth into new beverage categories, Sweat says. The company has considered moving into flavored waters, better-for-you isotonics, and shelf-stable dairy beverages in the future, he says. “What good2grow provides is a very strong brand platform that enables innovation so that we can inject growth into segments of the beverage industry that really have not been growing, like we’ve done in juice,” he explains.

The company originally unveiled the products at the 2013 National Association of Convenience Stores (NACS) Show, inviting convenience store retailers to put the juice blends to a taste test. “We just said, ‘Try our new flavors,’ and they loved them,” Sweat recounts. “And then we said, ‘Oh, by the way, did you realize you were drinking carrot juice?’ and the shock was pretty profound in a positive way.”

The company hopes these positive perceptions of good2grow will be shared by consumers as well. “We’re sort of the Trojan Horse: moms’ secret ally to get kids to eat and drink healthier,” Sweat explains. “And [it’s] the Trojan Horse effect of if the kids can’t tell, they think it’s just great-tasting juice, and it’s actually got some very, very healthy components inside the bottle.”

To further preserve the health benefits of the juices, the company is switching its juices over from a monolayer bottle to a multilayer bottle along with the rebranding. “Going to the multilayer bottle … enables us to be absolutely certain that when you take a drink at the ninth, 10th, 11th or 12th month of this product’s shelf life, it’s as close to that first month as possible in terms of taste, color and vitamin potency,” Sweat explains.

With these new tools in its arsenal, In Zone Brands says it is on track to become a $100 million company this year, and it hopes that the good2grow platform will launch it to the $1 billion level in the years to come.