Flash back to elementary school when science teachers emphasized that while white was the presence of all colors because it reflects light, black is the absence of color because it absorbs light. Although not quite the same as the visual spectrum, Oakland, N.J.-based blk. Beverages LLC’s same-named product has taken on those dark aesthetics thanks to the absorption of its key ingredient: fulvic acid. 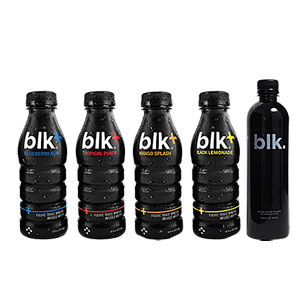 “Fulvic acid in its natural state is found most readily in the soil of the plant, and the plant cells [themselves] have a pretty critical role,” says Albie Manzo, vice president of marketing for blk. Beverages.

Manzo notes that once fulvic acid is added to a liquid — in blk.’s case, mineral water — the color changes to black. Although the color might be the most noticeable part of the beverage to the human eye, the water also features a high pH, trace minerals and electrolytes. These characteristics were among many that interested Chief Executive Officer Christopher Laurita and the rest of the staff at blk. Beverages when they stumbled upon this concept a few years ago at a tradeshow, Manzo says.

Jackie and Louise Wilkes, currently partners with blk. Beverages, first experimented with fulvic acid six or seven years ago when searching for a healthy beverage alternative. They learned about fulvic acid and its benefits and began adding it to water at home. The members of blk. Beverages approached the two about handling marketing for the product and became more inspired by the ingredients and concept, Manzo explains.

“We thought it had ‘a really nice intersection of trends,’ so we just kind of ran with it, so that’s really where the influence came from,” he says.

Standing out among the crowd

Although blk. Beverages utilizes water as its delivery system for fulvic acid, Manzo explains that the brand is not really a bottled water brand but more so a functional beverage brand that offers premium hydration.

One way the company has achieved this is through its recent launch of blk. +, which contains the same fulvic-enhanced mineral water as its flagship blk. product but in a variety of natural flavors. Available in Blueberry Acai, Tropical Punch, Mango Splash and Black Lemonade flavors, blk. + still maintains the same core values as the original product, Manzo explains.

“We wanted to maintain [an] all-natural [claim], which is why we chose stevia as a sweetener, and we didn’t want to have any calories or any sugar,” he says. “We wanted to play in that hydration space and offer consumers something different, but at the same time we didn’t want to compromise our core values.”

The new line also has helped the brand expand shelf presence at retail. “We thought that [blk. +] would improve shelf space because, when you’re a one-SKU brand, it’s really tough to stay relevant in the retailers’ minds [and] to have them keep [promoting] you with end caps or give you five or six facings of the same product,” Manzo explains.

Although blk. + could help the brand better establish itself, the company has been reserved with its launching of the new lineup and is focusing primarily on the East Coast. Showcasing the products first at the 2013 Summer Fancy Food Show, the company received positive reactions from attendees, Manzo explains. However, in the past, the company would have taken this feedback and aggressively pushed the launch, but that has not been the case this time around, he adds.

“We wanted to cultivate a following with the flavors, and we get really enthusiastic when we see accounts that are passionate about it and they understand the original [product],” Manzo says. “They’ve taken it, built a following in their own store with the original product, [so the] flavors are definitely an easier sell, but if you don’t have an understanding of what the product is and how it works, you kind of lose out on a lot of the point because we’re not trying to trade in refreshment.”

Understanding the concept will be crucial for the brand’s growth, Manzo explains. “You have to be aggressive because our brand definitely needs a lot of education,” he says. “For us, the grassroots approach is always the best one to take [and] it always bears the most fruit because when you’re in that store and you’re handing the bottle to a consumer for the first time, you’re really giving them a hands-on education as to what makes blk. so great, so you need to be there and have that person-to-person contact.”

Education also will remain key for the company and its team as it continues to establish its entire blk. portfolio in the market.

“I think you’re going to see a company that’s going to get a little bit more mature, and I’m excited for that because I think we’re starting to really get a feel for who we are in the marketplace and our identity and who we want to be and who we want to go after,” Manzo says. “I think it’s [happening] slowly but surely, but we’re learning.”

Launching a new beverage into the marketplace can be a challenging task, especially when it comes to effective marketing efforts. For blk. Beverages LLC, Oakland, N.J., its marketing strategy featured a component that not many brands can employ.

Originally featured on Bravo TV’s reality show “The Real Housewives of New Jersey,” blk. Beverages was able to educate consumers about its brand. However, that TV component was not without its own challenges, explains Vice President of Marketing Albie Manzo.

“[Since] we launched [on] ‘The [Real] Housewives of New Jersey’ a few years back, it’s [been] kind of a mixed bag for us,” he says. “When we got out there, I think a lot of people [thought] it would have been really easy to kind of roll your eyes and say, ‘OK, this is a reality TV show product,’ and that’s not at all what we were trying to classify ourselves as.”

“I think we fought a lot in the early stages to really try and have ourselves taken seriously out in the marketplace, have people know that we’re serious about our business and serious about our brand, and we want to see this thing really grow into something special,” he continues. “I think we’ve been around long enough now where we’ve achieved that to one extent or another, but there’s still a lot of work to be done.”

One way the company is making a name for itself is through its social media endeavors. “Our social media presence is critical because we definitely try to engage a lot with consumers and let them know what’s going on with the brand and keep it fresh and in their face,” Manzo says.

Manzo adds that social media is the brand’s biggest weapon, but it also comes with its own set of challenges. Because you are sharing your product with consumers on the Internet, you are exposing yourself to the opinions of consumers — the good and the bad, he notes.

“There are a lot of risks there,” Manzo says. “Controlling the message is difficult, but for us we found that the pros far outweigh the cons, so I think that’s something we’re going to continue to try and exploit.”

But growing the brand is not the only focus for blk. Beverages. In 2013, the brand announced a partnership with Generation Rescue, a national organization that provides hope, information and immediate treatment assistance to families affected by autism spectrum disorders. Manzo explains that the partnership is a personal one for the company as Chief Executive Officer Christopher Laurita’s son was diagnosed with the disorder a few years ago.

“We actually donate a portion of every bottle sold to Generation Rescue to raise awareness and improve quality of life [for] people and families affected by autism, and that’s a cause that’s really near and dear to all of us,” he says. “My cousin, our CEO’s son, was diagnosed a few years back, and it’s definitely a community that we wanted to try and be involved in as best we could.”