Anheuser-Busch finds out what’s in a Clydesdale’s name

At the end of January, Budweiser asked its Facebook fans and Twitter followers to send along naming suggestions for the new baby Clydesdale that starred in its 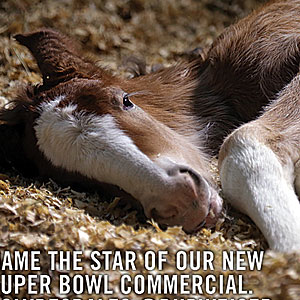 Super Bowl XLVII commercial. After receiving more than 60,000 tweets, Facebook comments, calls and direct messages, the name Hope was selected. According to St. Louis-based Anheuser-Busch, a subsidiary of Anheuser-Busch InBev, the name is a nod to the optimism and happy ending of the commercial where the trainer reunites with the horse he raised from a foal. Other popular names submitted included Landslide (after the Fleetwood Mac song in the commercial), Buddy, Star, Raven, Spirit and Stevie. Budweiser also announced that the first male Clydesdale born in 2013 will be named Stan after the recently deceased baseball Hall of Famer Stan Musial.