Although the craft movement has put a spotlight on the craft beer and spirits markets, the craft hard cider market is the segment blossoming at this moment.

“Hard cider occupies a slightly different place than traditional beer or craft beer for several reasons,” says Chris Lombardo, team lead and senior analyst for New York-based IBISWorld. “Unlike craft beer, the hard cider segment was not approaching saturation prior to the pandemic. Hard cider producers are far less reliant on on-premise sales than craft or traditional breweries, and new product variants are constantly being introduced to the segment. As a result, hard cider is expected to perform better than beer during the pandemic.”

Exemplifying a brand’s approach to new variants, Blake's Hard Cider (BHC), Armada, Mich., introduced in 2020 a refresh to the Blake's Lite Cider line adding new flavors Mimosa, Strawberry-Kiwi and Melon to complement the popular Apple flavor. The team at BHC was hard at work pushing boundaries to bring fresh ideas to the second edition of Blake's Lite Cider, it said.

“Blake's fans appreciated an alternative to hard seltzer and a lower calorie offering. Our team created some unique recipes for this generation of Lite Cider,” said Andrew Blake, owner of BHC, in a statement. “In these unusual times, people appreciate authenticity. We are surrounded by fresh fruit here at the farm and it's grown, created and packaged at our orchard.” 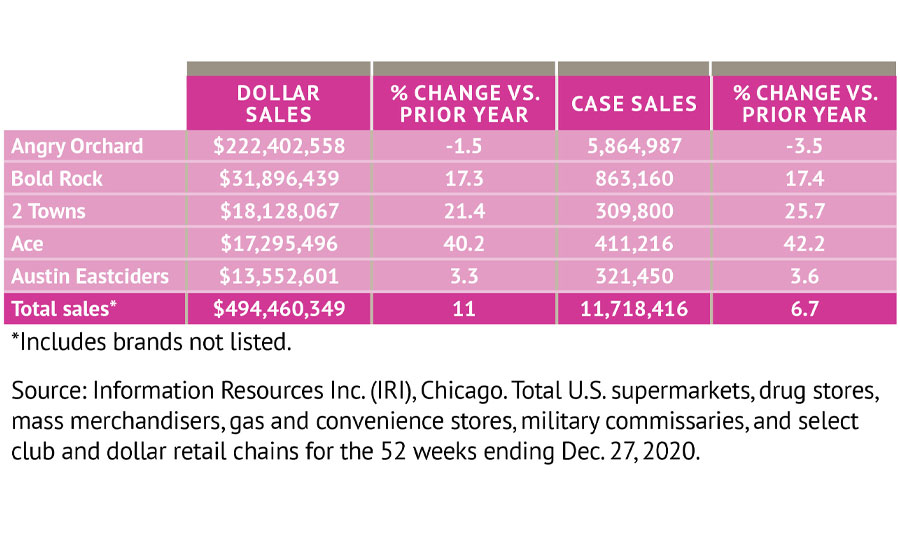 "At the Orchard, we're always exploring new ingredient combinations and cider-making techniques to continuously evolve our offerings across the Cider House and our national portfolio, too," said Ryan Burk, head cider maker at Angry Orchard, in a statement. "Using a complex blend of traditional cider- making apples as our foundation, we've found the addition of vibrant fruits like peaches and mangos can bring some subtle tart notes into the fold for a bright, really flavorful and easy to drink cider. It's a careful mix that allows all of the fruit in our new styles of cider to shine."

Noting that cider producers rely more heavily on off-premise sales, IBISWorld’s Lombardo says the beer segment has benefited from consumers increased spending at retailers. Yet, he recognizes that the category still has experienced its challenges during the pandemic.

“This is not to say cider producers haven’t struggled amid the pandemic, [as] operational and downstream market disruptions have been widespread and unavoidable,” Lombardo says. “Small or burgeoning cider producers face substantial hurdles both financially and in terms of capturing consumer attention. In all, the pandemic will likely result in a slowdown in the boom hard ciders were experiencing, but hard ciders are here to stay.”

However, not all analysts are as bullish on hard cider’s 2020 performance.

“Hard cider had a difficult overall 2020, with an estimated category-wide volume decline between 7 and 10 percent,” says Nathan Greene, consulting analyst for New York-based Beverage Marketing Corporation (BMC). “Angry Orchard, the largest single brand within the category, was particularly hard hit by on-premise closures. However, many small/local cideries continue to see growth and opportunities to evolve the category.”

BMC’s Brian Sudano, managing partner, highlights that because much of the activity for hard cider is at the local level, it performs similar to craft beer. However, unlike craft beer, hard ciders biggest competition lies with flavored malt beverages (FMBs).

“Hard cider continues to compete directly with products such as FMBs,” he says. “As hard cider has never developed a large following in the U.S., it is challenging to compete against macro trends such as hard seltzer. The category has evolved to be more regional and craft like versus larger more broadly accessible categories.”

In Chicago-based Mintel’s November 2020 report “Beer: Incl Impact of COVID-19 – US,” the market research firm reports that based on Mintel Purchase Intelligence that cider releases from January 2019 to October 2020 outperformed beer in key areas.

“While cider continues to fly under the radar, largely made up of a greater number of smaller brands that don’t have the marketing heft of larger category players, it outperforms beer on key measures including taste and refreshment,” the report states. “Cider’s strong perception of being ‘natural’ is a benefit that can help with a health halo, even if the products contend with higher calorie totals. While craft cider has been a thing for a while, it’s largely been limited to craft beer circles. Emphasizing the craft of cider to a more mainstream market can act as a booster to further fuel craft interest.”