The Olympic Games Beijing 2022 concluded Feb. 20 as men and women across the world competed against the best talent in these winter sports. In the U.S. beer market, the competition remains just as fierce, as beyond beer products has challenged traditional beer; however, niche markets like hard cider also have experienced the affects from new age beyond beer entrants.

According to Chicago-based Information Resources Inc. (IRI), hard cider dollar sales amount to $489.6 million, a 2.4% decline for the 52 weeks ending Dec. 26, 2021, in total U.S. multi-outlets. Volume sales were down even more with 6.1% contraction during that timeframe.

Kaleigh Theriault, beverage alcohol thought leadership manager for Chicago-based NielsenIQ, notes that hard cider is down 8.1% for the 52 weeks ending Jan. 29, but up 4.5% during the past two years. 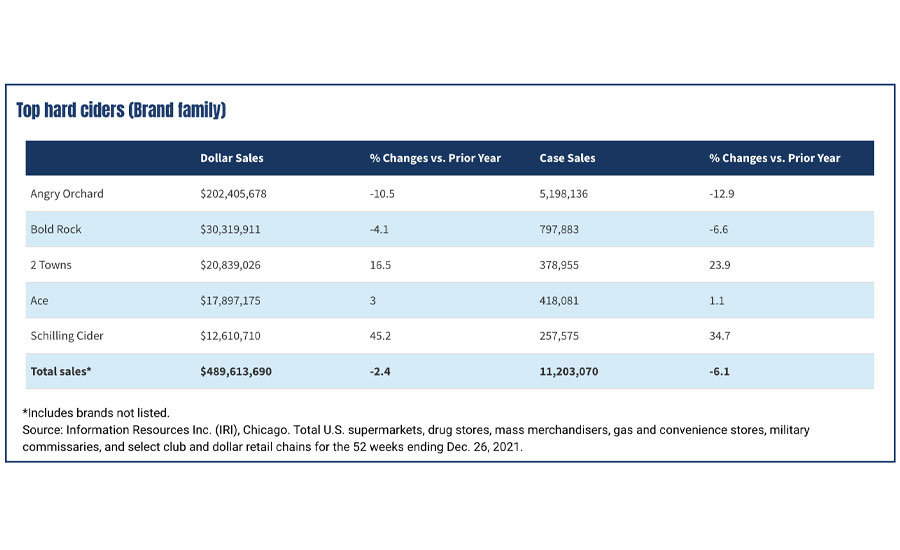 “Cider subcategories across the board are seeing declines in the latest 52 weeks, but seasonal (up 31%) and standard (up 17%) ciders have managed to capture growth over the last two years, while semi sweet (down 61%) and dry (down 12.2%) ciders saw double-digit declines,” Theriault elaborates.

Although hard cider is down in the short term, it has experienced overall positive growth rates over the past decade.

“The hard cider market experienced explosive growth over the last decade, but has been curbed by volatile supply and demand more recently,” explains Grace Wood, industry analyst for Los Angeles-based IBISWorld. “Consumer preferences for hard cider have trended toward smaller, craft cider brands, which have been unable to meet demand in recent years. Additionally, rising competition from [ready-to-drink] (RTD) cocktails, [flavored malt beverages] (FMBs) and craft beer have stifled growth. However, the industry is expected to return to growth after supply and demand conditions normalize in 2022 and beyond.”

“BevAlc Insights’ 2021 Hard Cider Category Forecast,” a report compiled by Drizly, also highlights the recent shift in the segment. The report states that hard cider represents 4.3% share of Drizly’s beer category; however, it was at a 6.4% share on the platform in 2018.

“A few years back, hard cider was among the hottest new beer subcategories among alternatives to traditional beers,” stated Liz Paquette, Drizly’s head of consumer insights, in the report. “But in recent years, options for consumers have grown in the space, taking share from hard cider.”

The report identifies the stronger connections that consumers associate with “better for you” with alternatives like hard seltzers, hard iced tea, hard lemonade and hard kombucha as playing a factor in hard cider’s decline.

Brian Sudano, managing partner with New York-based Beverage Marketing Corporation (BMC), notes that consumer education is needed to explain what hard cider is. The segment also is experiencing a dearth of opportunities to generate trial. Securing distribution agreements also have hampered the segment.

“With RTDs satisfying need for variety, it is more difficult to get broad distribution,” Sudano says.

Whether its non-alcohol or beverage alcohol, health and wellness is reaching broader parts of the beverage market. As hard cider looks to reclaim its market share, experts note this could be vital for the beer segment’s future.

“Similar to the beer and FMB segments, we’re going to see more innovation in health and wellness-focused offerings as consumers opt for better-for-you options, with 29% of consumers actively seeking ‘healthier’ options when browsing for products according to NielsenIQ’s Health Shopper Survey,” NielsenIQ’s Theriault says. “In recent years, we have seen an emerging play among ‘hard cider-seltzers’ and lower calorie ‘light’ hard ciders. From a flavor perspective, we will likely continue to see popular seltzer flavors make their way into many hard ciders in a play to capture the curiosity of the ready-to-drink consumer.”

“Even before the huge rise in hard seltzer, all of the new dollars to the alcohol space were driven by low-calorie options including ultra-light beers. As the growth in seltzer calms down, adventurous consumers are seeking out unique and better tasting low calorie alcohol options,” said Dave Rule, senior vice president of marketing at Austin Eastciders, in a statement at the time of the release. “We’re excited for people to discover the elevated flavor experience of our new Austin Eastciders Light Cider lineup.”

“In recent years, we have seen an emerging play among ‘hard cider-seltzers’ and lower calorie, ‘light’ hard ciders. From a flavor perspective, we will likely continue to see popular seltzer flavors make their way into many hard ciders in a play to capture the curiosity of the ready-to-drink consumer.”
- Kaleigh Theriault, beverage alcohol thought leadership manager for NielsenIQ

“Hard cider has benefited from consumer demand for local and craft beverages, however, with regional and local brands reporting strong sales,” the report states. “Craft cider brands are also injecting innovation into the hard cider space, with a slew of cider-wine mashups, hopped ciders and grafs (a beer-cider hybrid) coming onto the market.”

“We are thrilled to launch these new varieties of the Cosmic Explorer Series,” said Dave Takush, head cider maker at 2 Towns Ciderhouse, in a statement. “The spectacular flavor of the Cosmic Crisp apple really supports the tangy and tropical vibes of the passionfruit and hibiscus. I also love how the character of the NW Blueberries really shine through in the Blueberry Cosmic. Both of these new Cosmic ciders are out of this world.”

The Cosmic Crisp apple is the work of 20 years of study and research by Washington State University, resulting in a bred hybrid of Enterprise and Honeycrisp apples. “Undoubtedly, the partnership with 2 Towns Ciderhouse and Cosmic Crisp will live long and prosper,” said Kathryn Grandy, chief marketing officer at Cosmic Crisp, in a statement. “We are delighted to build upon this natural alliance and excited to be collaborating on such incredible flavor innovations with 2 Towns.”

Whichever path cider-makers decide to go down, it looks as though hard cider will continue to be competitive in the U.S. beer market.