This website requires certain cookies to work and uses other cookies to help you have the best experience. By visiting this website, certain cookies have already been set, which you may delete and block. By closing this message or continuing to use our site, you agree to the use of cookies. Visit our updated privacy and cookie policy to learn more.
Home » Hockey Hall of Famer brings whiskey love to life with Belfour Spirits
Wine & Spirits

College alums know to the value in sending an honorable tribute to their alma mater. For Belfour Spirits’ founder and professional hockey Hall of Famer Ed Belfour, his acknowledgement to the University of North Dakota hockey program and its fans came in the form of a Special Edition Straight Rye Whiskey.

An All-American goalie, Belfour led the University of North Dakota’s men’s ice hockey team to a national championship during his freshman year in 1987. That season subsequently catapulted his career in the NHL. But since 2014, Belfour has “been in the game” to establish his whiskey brand in the liquor industry. The company’s main “goal,” no pun intended, is to never disappoint its fans and buyers when distributing crafts of whiskey. 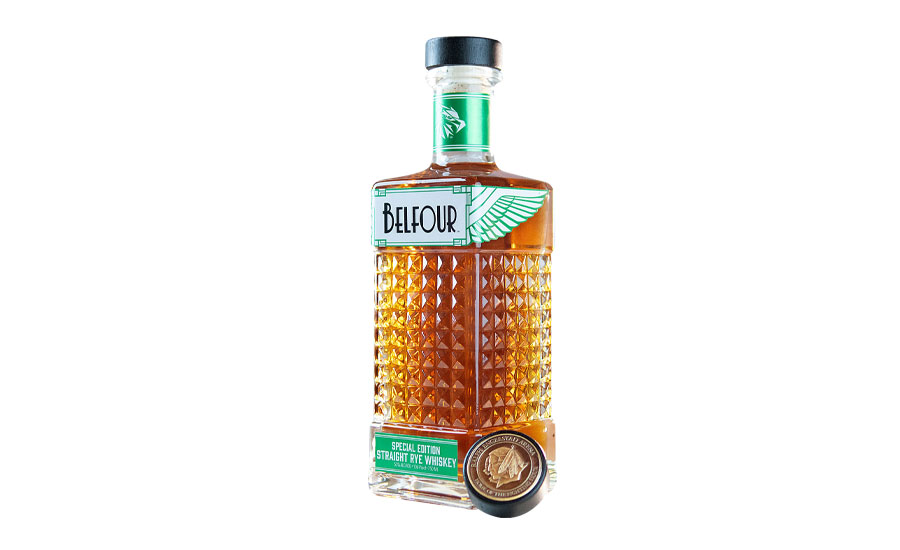 “I have a lot of loyalty to the Fighting Sioux program,” Belfour explains. “The fans have taught me about support, loyalty, grit and leadership. I wanted to give something back, and I’m so proud of that special edition line. As well as the whiskey inside the bottle is amazing. The package turned out awesome. We had a lot of compliments from that.”

Before the distillation of his special edition products, Belfour discovered the unique coppers of Sioux coins from a promotional event in North Dakota. This realization automatically gave him the idea to design these species onto the corks of the company’s Straight Whiskey bottles. Consumers also are showing their appreciation for the packaging.

“I think it sold out right away,” Belfour said. “There’s not very much of it left.”

Although the packaging innovation has been an early success, the desire to create it stems from Belfour’s appreciation for the university and community.

“I wanted to give something back; we wanted to do something special for the Fighting Sioux,” he says. “It’s for the teammates, coaches, and of course our fans. I’m hoping that everyone over there loves the bottles and the whiskey inside. I’m very proud to have my name on it.” 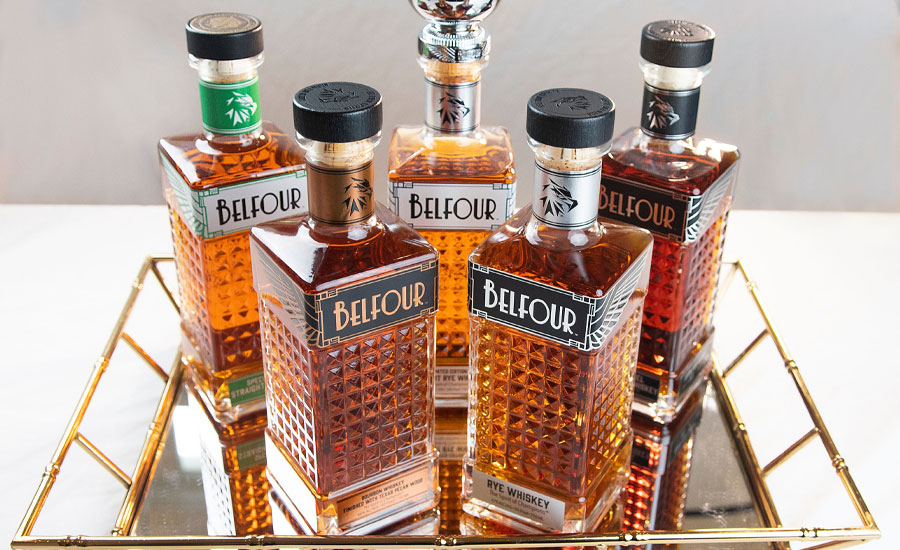 A desire to distill

The Belfour Spirits’ chief executive officer (CEO) and his son Dayn, vice president of the company, learned the procedure of craft distilling while attending Moonshine University in Louisville, Ky., a few years prior to the special edition project. Dayn later interned for Woody Creek Distillers in Basalt, Colo. That grounding helped prepare them to partake in the action of purifying a special product later on. Dayn now serves as distiller for the spirits brand.

As an avid fan of rye whiskey, the former NHL All-Star already has displayed three cases of that particular cereal grass liquor. However, those spirits don’t necessarily taste the same as one another. His team’s Limited Edition Straight Rye Whisky came from the first 12 barrels that they made.

“I think we did a fantastic job with that,” the CEO says. “We have the Special Edition and our regular Rye. People love our Rye Whiskey, it’s not an over-the-top spicy robust rye, which a lot of them can be that are like 95 percent rye plus. We want to have a well-balanced rye whiskey. All of them are very easy and smooth to drink.”

As a legendary player for the Dallas Stars, Belfour felt the importance of gaining a Lone Star State connection. As part of its aging process for its Bourbon Whiskey, the company inserts staves of Texas pecan wood. The distilling team managed to toast the wood and aged the bourbon for two months of its aging period inside a barrel.

“It gives a really awesome, unique, smooth, rich, and smoky flavor to the bourbon,” Belfour enthuses.  “It’s been well-received, people love it, and it helped bring the whiskey along much quicker than most bourbon which is hard to do.”

The notion to include pecan wood in the aging process was inspired by an oversized pecan tree on his ranch in Van Alstyne, Texas.

When it comes to the Texas pecan wood that it uses for toasting and charring, Belfour Spirits has done a lot of research and development work.

“We’ve learned that the certain toasting and char levels work better for the bourbon versus the rye,” he mentions. “And different barrel entry proof makes a big difference on how quickly the whiskey ages and how smoothly it could taste right away.”

Through this learning, Belfour Spirits has developed its Special Edition and Single Barrel offerings. His initiative to create a favorable profile for regular Rye Whiskey by aging barrels and coordinating duties on charring has been realized. Thus, he will be selling his first small batch bourbon whiskey this spring.

“The Rye Whiskey likes a char three, while our Bourbon seems to like a char four,” Belfour states. “So, these are the things you learn from experimenting. We’ll continue to do that and create these special editions in small batches.” 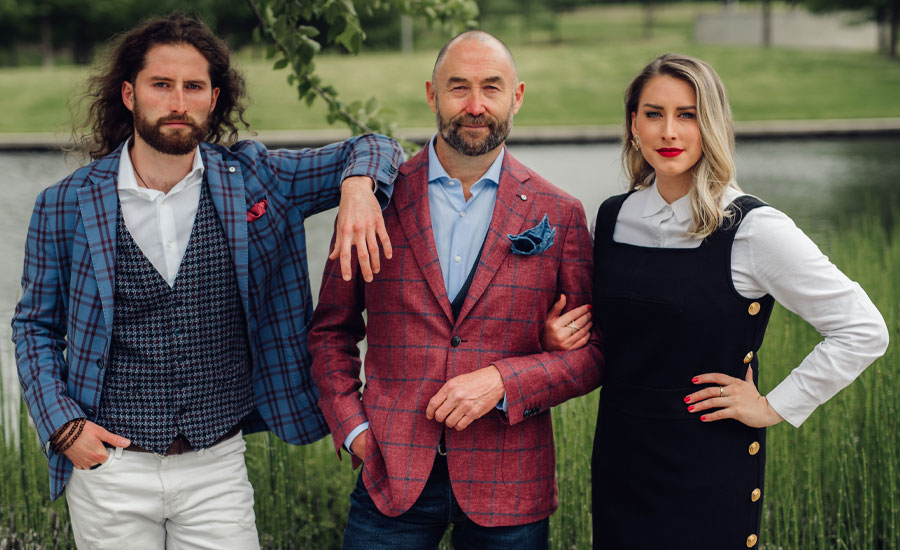 Belfour is approaching this whiskey business as a team-oriented dynamic just like he has learned during his years in professional ice hockey. He wants his team to seize the essence of unity and a competitive ambition. The 2011 hockey Hall of Famer is hoping to eventually obtain his official distillery for Belfour Spirits in the Dallas area.

“We have a great team and great leadership,” he says. “Our team has worked hard through this whole pandemic. We worked every day at whatever we can control in our business, and we did that.”

The whiskey distiller is disseminating across Illinois, South Dakota, Texas, Tennessee, and, of course, North Dakota. However, it is unable to distribute its products in Canada because of the current coronavirus pandemic.

Through it all, Dayn and Reaghan Belfour, Belfour’s daughter, are manifesting a personal camaraderie as reliable business partners. It’s a bond and chemistry that many companies don’t have nor understand, the company notes. Reaghan currently serves as director of finance and operations.

“They are doing an awesome job for the business,” Belfour says. “It’s definitely been an adventure and there’s things that we’re learning about one another in a business setting.”

In the future, Belfour and the spirits company are hoping to continue flourishing through hard work and diligence. Just as he honed his skills to become one of the top goaltenders in the NHL, this ambitious entrepreneur will always showcase his competitive drive to attain excellence.

Belfour Spirits – The Spirit of Champions