Eleven-year-old Michael Jackson and his brothers of the Jackson 5 suggest in the 1970 “ABC” song that falling in love is as easy as learning your ABCs and as simple as “do re mi, A B C, one, two, three, baby, you and me.” When it comes to THC as a euphoric ingredient in beer, soda and teas, however, things are far from simple.

Although there is considerable interest and new product development around cannabis-infused drinks as alternatives to alcohol and as tools for wellness, experts suggest the legal ramifications of tetrahydrocannabinol (THC) are making ingredient usage far more complicated than its cannabidiol (CBD) cousin. 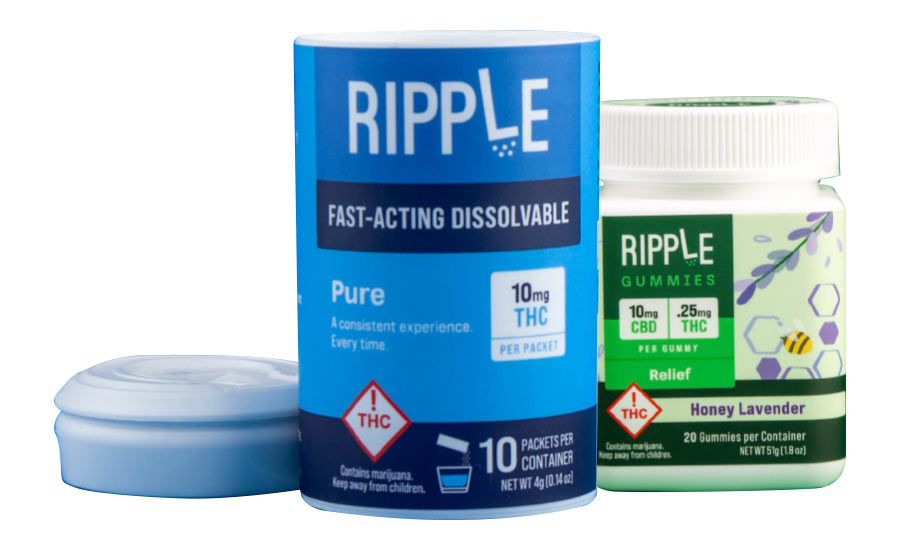 Both THC and CBD are chemical compounds derived from the Cannabid sativa plant, or marijuana. THC, the main psychoactive compound in the cannabis plant, is responsible for the “high” or euphoria in humans, while CBD is a naturally occurring substance used in alternative lifestyle beverages, oils, creams and edibles like gummies to impart a feeling of relaxation and calm, explains Andrew Wong, president of Axiomm Technologies Ltd., Calgary, Alberta.

Although it’s hard to know the impact THC is having on the non-alcohol beverage market, Wong suggests that THC products are having a “significant impact” on alcohol beverages.

“One report states that the volume of beer sold in Canada declined 3 percent in the first 11 months of 2019 compared to the same period in 2018,” he says. “This isn’t an insignificant change for a one-year period, and I’d expect the shift to continue as the stigma surrounding cannabis use continues to ease and as the market starts to present more infused beverage and edible options to consumers.”

The entry of groups like AB InBev and Constellation Brands into the space in countries where it is legal at the federal level is a strong indication that industry insiders seems to think similarly, Wong adds.

Enter Grainwave, a 64-calorie Belgian-style White Ale brewed as a beer with blood orange peel and coriander, then dealcoholized and infused with a microdosed 5 mg of fast-acting THC that leaves no cannabis flavor, Villa says. It now is available in 132 dispensaries in Colorado as well as California and Nevada.

Based on the success of Grainwave, Indiewave, a West Coast-style IPA with 10 mg of THC also is making waves in the market along with an American Light Lager with 2.5 mg of THC.

“Five years ago there were not many beverages containing THC,” Villa explains “The majority of THC beverages that existed were sweet soda-like beverages such as root beer and cola-type drinks.  Additionally, non-carbonated beverages were present, such as coffee and sweet drink products.

“THC in beverages is unique because many adult consumers still do not know that they are available,” he continues. “We are trying to educate budtenders and consumers about the advantages of our products, and we are pleased that more and more people are learning about CERIA; and that cannabis beverages are increasing in popularity.”

“Based on consumer research, we see that between 30 and 40 percent of cannabis consumers and beverage alcohol drinkers claim they have reduced (or plan to reduce) their beverage alcohol consumption as a result of consuming THC-dominant marijuana products,” Matura says. In addition, 40 percent of consumers avoid consuming alcohol beverages and marijuana at the same occasion, he adds.

“In terms of the reasons why consumers are passing on beverage alcohol for marijuana, most of it traces back to consumers’ perceptions that marijuana is healthier, doesn’t cause a hangover or headache, and that it tends to be low- or often zero-calorie,” Maturo says. “When marijuana becomes legal for adult use in a given market, we typically see low single-digit declines in alcohol sales for the first eight to 12 months, but following that period sales tend to return to their norm.”

Justin Singer, chief executive officer at Caliper Foods/Stillwater Brands, notes that alcohol and THC each have their loyalists, but he doesn’t believe THC will supplant alcohol. “The rate of THC beverage adoption will depend on a host of factors — e.g., regulatory certainty, access to marketing channels, supply chain economics, and retail shelf space,” he says.

Although THC product usage is going up “slowly and fitfully,” Singer suggests that logistics are the greatest impediment to growth in THC beverages.

“Alcohol operates atop an incredibly sophisticated supply chain,” Singer explains. “They’ve had regulatory certainty for decades, and they’ve taken advantage of that certainty to invest in what’s needed to convey a heavy, refrigerated product from one coast to another in a safe and economically efficient manner. … In contrast, THC beverages must be wholly produced within a state’s borders using unproven technology with no regulatory certainty, driven to dispensaries in whatever car’s available, and then sold off a standard shelf, with rare opportunity for any advertising or merchandising whatsoever.

“THC beverages are hog-tied compared to alcohol,” he continues. ”And until that changes, there’s little reason to expect growth beyond what comes from adding new states. That said, once THC beverages can be sold under a national regulatory regime, the sky's the limit.”

Like many in the industry, Glen Boggini, owner and product developer at Charles Boggini Co. LLC., Coventry, Conn., believes that regulatory standards in both CBD and THC is “confusing and severely behind the market.”

“Our expertise is in creating CBD nano-emulsions which are stable and provide better absorption in the digestive system.” Boggini says. “When THC becomes legal in our state or federally, we will apply the same techniques we use now for CBD.  The transition will be seamless as they are both botanical extracts (oils).”Citing a November 2018 BDS Analytics report, Axiomm Technologies’ Wong says that year-over-year growth of the edibles market is about 80 percent.

“We’re seeing more and more brands and manufacturers come online with some form of THC beverage,” he says. “The most popular types of beverages seem to be water, sodas and tea-like beverages with fruity flavors.

“Importantly, most of the infused beverages that exist or are being launched aren’t targeting heavy cannabis users,” he adds. “… Brands are instead focusing on users who are casual, light users or those who are intrigued by THC-infused beverages but haven’t tried them before.”