Created as a comic strip superhero in 1938, Superman was "faster than a speeding bullet, more powerful than a locomotive and able to leap tall buildings at a single bound.” With the beverage industry increasingly focusing on health and wellness, “super ingredients” originating from all-natural, label-friendly and sustainable plants are proliferating “faster than a speeding bullet.”

In fact, business is booming in the $5 billion U.S. plant-based industry as grocery store sales of plant-based foods that directly replace animal products have grown 29 percent in the past two years, while total U.S. retail dollar sales significantly lagged behind at 4 percent, according to a March 3 statement from Chicago-based SPINS.

Besides the natural channel, the beverage industry also is seeing a surge in new beverage-brand innovation powered by plant-based ingredients. Globally, new food and beverage products making a plant-based claim increased 58 percent between 2013-2019, according to Chicago-based Mintel. 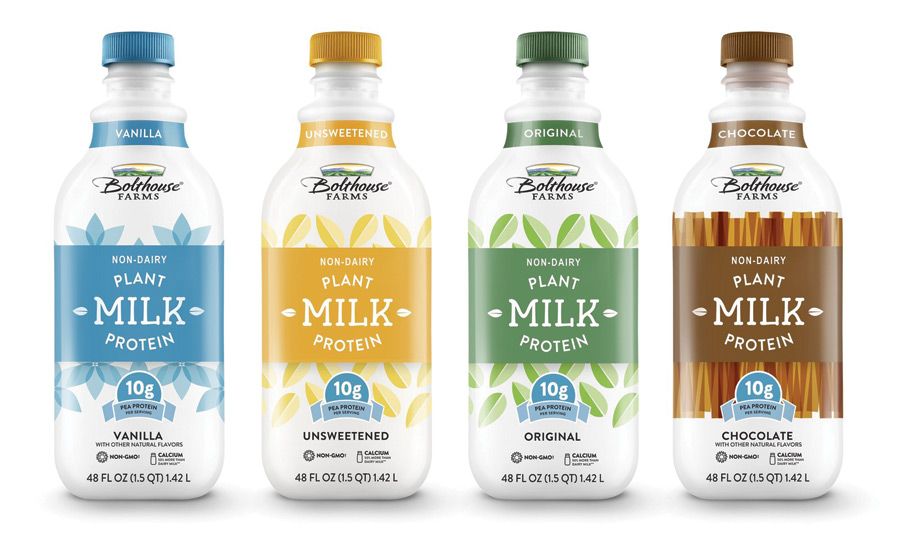 The non-dairy alternatives market is projected to grow to $29.6 billion by 2023, at a compound annual growth rate of 11.4 percent, according to MarketsandMarkets. Bolthouse Farms offers ready-to-drink, non-dairy milks with 10 grams of pea protein in four flavors: Original, Vanilla, Chocolate and Unsweetened. (Image courtesy of Bolthouse Farms)

In addition, the dairy alternatives market is projected to grow from $17.3 billion in 2018 to $29.6 billion by 2023, at a compound annual growth rate (CAGR) of 11.4 percent, according to MarketsandMarkets, Hadapsar, Pune, India.

Brittany DeMarco, marketing and communications manager for Top Health Ingredients Inc., Edmonton, Alberta, suggests that the greatest growth in plant-based beverages is originating from dairy alternatives, which comprise more than 14 percent of the entire dairy market — and is growing. The plant-based milk category is worth $2 billion alone, she adds.

“Certainly the beverage categories most likely to utilize plant proteins are sports beverages and dairy alternatives,” DeMarco says. “We are, though, beginning to see lots of innovation in plant-based beverages. Functional waters are starting to hit the market and we expect to see even more unique applications in this sector as technology allows for improved performance in plant-based ingredients.

“We’re seeing a lot of pea and soy proteins in these products currently, but that seems to be shifting to more unique products like fava and chickpea proteins,” she continues. “Our AdvantaFava fava bean protein is a unique, high-in-protein alternative to pea and it is getting incredible exposure. It doesn’t have the same lasting aftertaste as most pea proteins and works very similarly to pea in application, making it an easier substitute.” 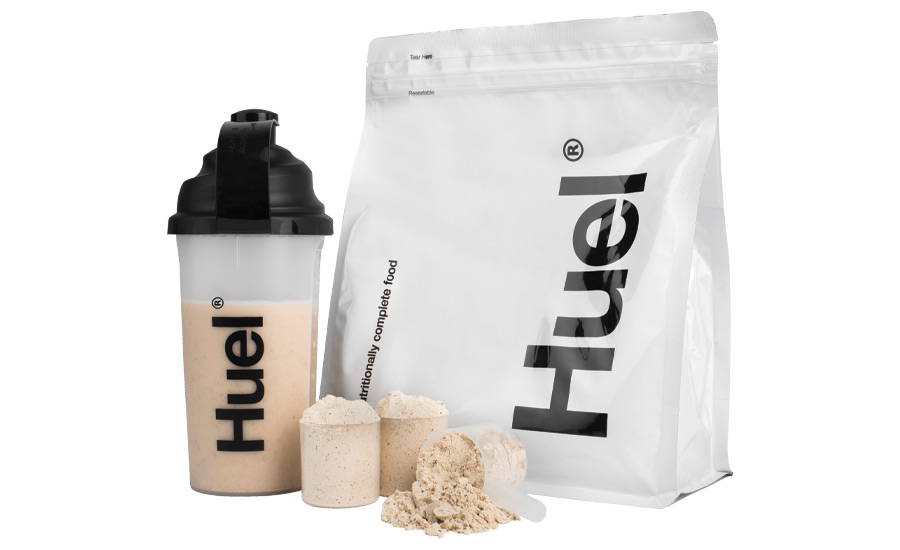 For a meal replacement or a between-meal snack, Huel Powder is a nutritionally complete food that is high in protein and fiber. Made of an ultra-fine blend of oats, rice, peas, coconuts and flaxseed, the product also is lactose-, soy- and GMO-free. (Image courtesy of Huel)

Andre Romanzini, strategic marketing analyst for North America, and Mary Ronan, senior food technologist at Princeton, N.J.-based Solvay, suggest that pea and soy are the most traditional ingredients along with hemp, seaweed and rice.

“Each protein gives a different profile and offnotes, which varies depending on its geographical origin.  Maintaining consistency on the profile (once you're finally able to get there) is an extra challenge,” they say.

While rice is a plant-based ingredient, Jonathan Gordon, president of the Glasgow Consulting Group, Narragansett, R.I., suggests rice usage has fallen out of favor because of solubility issues and better ingredients arriving on the scene.

However, Gordon cautions that organic/vegan and the everyday consumer should understand the limitations of plant-based proteins and pay attention to the science behind its ingredients. “There is an enormous amount of misinformation on the Internet about plant-based foods,” he explains. “This can even be seen in ‘respectable’ food blogs etc., and it often repeats and amplifies issues for which there is little to no scientific backing.

“Are plant proteins clean-label ingredients?,” he asks. “I believe that they are and are a healthy alternative to animal proteins. There is a movement against hexane extraction of oil prior to protein isolation. I do not believe that a process, which leaves zero residual hexane in the final product, makes the product non-clean label. Perhaps there are larger environmental issues with the use of organic solvents, but these would not affect the ‘clean-label’ status.”

Sustainability at its core

While most pea proteins bring along a host of flavor issues, PURIS pea protein is sourced from yellow pea seed varieties specially selected to minimize the off-flavors normally attributed to pulses, Machen says. Additionally, the ingredient is processed without the use of hexanes to bring out the best flavor possible. She also points out that beverage formulators don’t need a masking agent when utilizing PURIS.

“Cargill’s offerings deliver a minimum of 80 percent protein with a high protein digestibility-corrected amino acid score (PDCAAS), giving manufactures the ability to fortify at much higher levels than many plant protein options,” Machen explains. “While pea protein is not considered a ‘complete’ protein (two of the amino acids, methionine and cysteine, are limiting) it’s easy to compensate. Formulators can either blend pea protein with a complementary protein source or add extra pea protein to achieve the target protein claim.”

As the exclusive distributor for United Kingdom-based Deltagen, Stauber will be launching the company’s new line of plant proteins under the Atura brand name this spring. “We will start with Atura Chickpea and Atura Red Lentil around April or May and then introduce Atura Fava Bean protein later this year,” Stano says. “These will all be organic, all will be over 80 percent protein level, and have a good taste and solubility.” 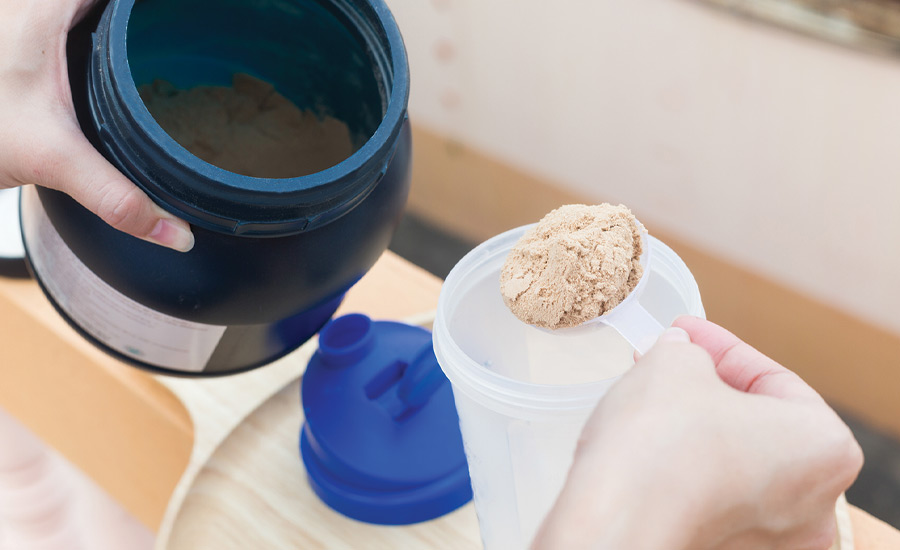 Artura will be produced in the United Kingdom utilizing European Non-GMO sources of plants, Stano adds.

As plant-based diets evolve from niche to mainstream, Laura Gerhard, director of strategy and marketing for the global ingredients division at Sacramento, Calif.-based Blue Diamond Almonds, notes that there are ample new opportunities for almonds as they are recognized, established ingredient.

“Beverage manufacturers are increasingly leveraging almond ingredients, such as Blue Diamond Almond Protein Powder, to achieve optimal taste, texture and nutrition in their fortified products,” Gerhard says. “With Almond Protein Powder, manufacturers can capitalize on the well-established trust in the healthy attributes and taste of almonds, as well as the trend toward plant-based and high-protein diets.”

Specialty plant-based protein in foodservice beverages, such as those served in the coffee or smoothie business, might also benefit from the company’s Almond Protein Powder, she adds.

How much is enough?

When it comes to how much protein should be in a certain beverage, experts note that “more isn’t necessarily better.” As it relates to health and well-being, too much protein can cause texture and taste challenges at higher levels; however, masking and stabilizing solutions can address that challenge.

How much protein used in a given product depends on the application. “If you’re making a protein bar or ready-to-mix beverage for athletes, then yes, you’re likely trying to get your protein level to 20 grams per serving or more,” Top Health Ingredients’ DeMarco explains. “However, you can run into some texture and taste challenges when you start to get into those higher levels.”

When formulating with plant proteins — and depending on the type and amount of protein used — some beverages might require masking solutions to offset grassy, beany notes. Working with ingredient suppliers who can support customers with their formulation challenges is crucial, experts say.

“Solvay produces a range of natural and synthetic vanillin-based formulation solutions developed to mask the offnotes typically present in plant-based proteins,” Romanzini and Ronan say. “Solvay Vanifolia and Govanil brands use the vanillin properties to mask the offnotes of the protein, mainly blocking the bitterness, without adding a vanilla flavor when used at a low level. Formulators can then add any flavor according to the market demand.”