Retaliatory tariffs on American whiskey could halt growth in US

In the 1980 dance and wedding anthem “Celebration,” Kool & the Gang urges revelers to “celebrate good times” by bringing “your good times and your laughter, too. We gonna celebrate your party with you. Come on now … Celebrate.”  The spirits industry also has plenty of reasons to celebrate as the category experienced accelerated growth for the 10th straight year, as supplier sales were up 5.3 percent, volume up 3.3. percent and retail sales totaled $90 billion in 2019, according to the Washington, D.C.-based Distilled Spirits Council of the United States (DISCUS).

In 2019, spirits gained market share versus beer and wine with sales rising half of a point to 37.8 percent of the total beverage alcohol market, the association states. This represents the 10th straight year of market share gains overall, where each point of market share is worth $770 million in supplier sales revenue, it adds. 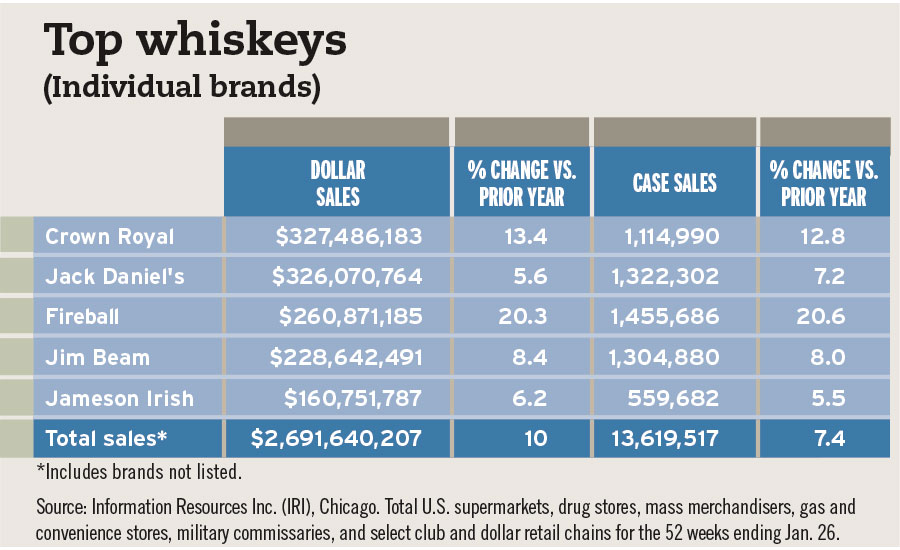 In a February press release, DISCUS Chief Economist David Ozgo reported that the strongest revenue growth in spirits continues to come from high-end premium and super-premium products. He notes that those price points increased 7.6 and 7.9 percent, respectively, while product volume rose 8 and 7 percent.

“Due to the rapid growth of super-premium spirits over the last 10 years, the average supplier per 9-liter case (12 bottles) is now more than $120,” Ozgo points out. 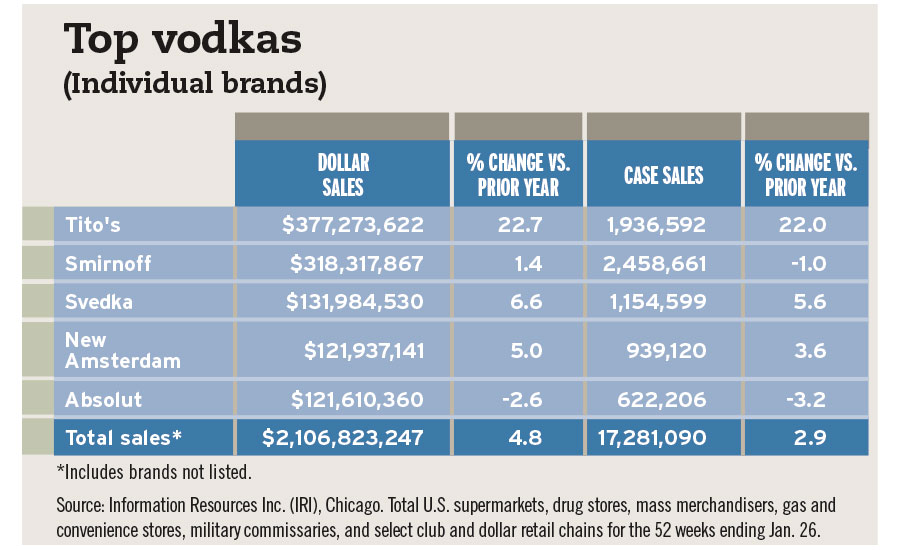 In addition, vodka continues to maintain favor — and flavor — with consumers, as the spirit sector’s largest category represented 31 percent of market share last year with sales of $6.6 billion. Despite the fact that vodka revenue was only up 2.9 percent, DISCUS suggests strong growth in high-end premium vodkas were key to its success.

New York-based Nielsen also notes the consistent, upward trajectory of the spirits category, with off-premise sales of $15.4 billion for the 52 weeks ending Jan. 25, a 5.2 percent increase over the prior year.

Toast of the town

When it comes to what’s driving segment performance, market research firms have found certain product attributes are finding favor among specific consumers. A deeper appreciation of the brown spirit and its smokier, more nuanced complexities are driving growth among a core base of older, more affluent white males. Characterized as an “old man’s drink,” dark spirits are almost twice as more likely to be consumed by men than women, according to Mintel’s December 2019 “Dark Spirits – US” report.

Yet, “Market growth hinges on continued appeal of this core base, while nurturing growth to others such as Gen Z and women, especially with varied flavors and formats,” it states.

The Chicago-based market research firm suggests that the five-year growth of both on- and off-premise spirits sales is anchored by robust whiskey sales.

“The $67 billion spirits market has shown strong growth during the five-year review prior, and positive growth is forecast through 2024,” the report states. “Spirits sales growth has outpaced that of the largest alcoholic beverage category, beer, and in 2019, its dollar sales overtook that of wine. 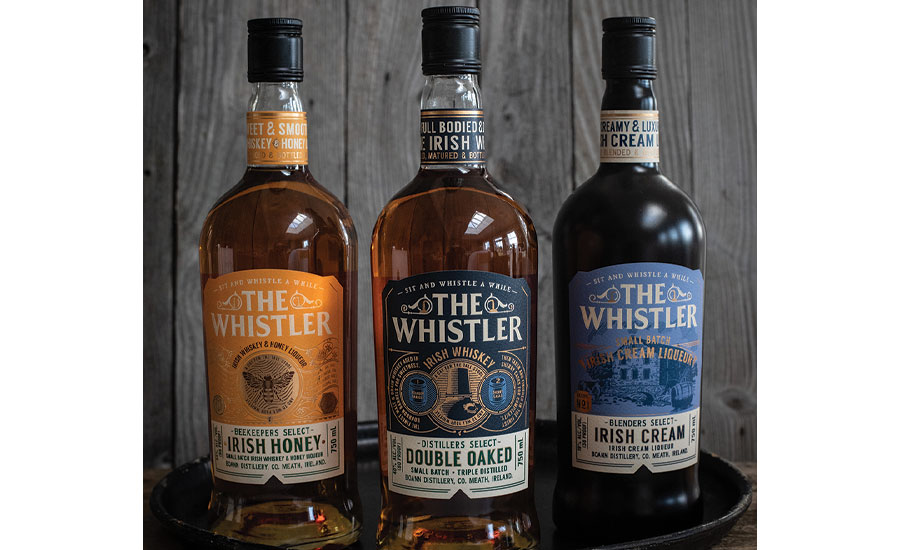 Nielsen CGA highlights that whiskey notched off-premise sales of $5.7 billion for the 52 weeks ending Jan. 25. Among the sub-segments of the whiskey category, Irish whiskey notched the largest year-over-year increase of 17.3 percent and sales of $463 million, according to the market research firm. (Image courtesy of the Prestige Beverage Group)

“… American whiskey/bourbon has been a key driving force in dark spirits, which has been trending for the past five years, and is forecast to continue to do so,” it adds. “While brandy, cognac and Armagnac is a smaller segment, it has also enjoyed steady five-year growth, bolstered by innovation and the engagement of women.”

Nielsen CGA notes that the overall whiskey category, encompassing blended whiskey, straight bourbon, Scotch, Canadian whisky, rye whiskey, Irish whiskey and Japanese whisky, grew 6.7 percent and generated off-premise sales of $5.7 billion for the
52 weeks ending Jan. 25. Blended whiskey was the No. 1 growth driver of the sub-category with sales of $2.7 billion and a 3.9 percent increase over the prior-year period.

Additionally, Irish whiskey notched the largest year-over-year increase of 17.3 percent and sales of $463 million, followed by rye whiskey at 15.1 percent, and straight bourbon at 13.5 percent, which saw sales of $171 million and $2.7 billion, respectively, for the 52 weeks ending Jan. 25, Nielsen data reports.

In its July 2019 “Spirits in the US” report, Euromonitor International notes that bourbon/U.S. whiskey is leading the way by volume, benefiting from the surge in small-scale producers innovating in areas such as American single malt.

The Chicago-based market research firm also notes that in the “standout whisky category,” Japanese whisky is the fastest-growing sub-segment, albeit from a smaller base. Yet, it also predicts that this up-and-coming style also is likely to see a slowdown in the coming years due to intensifying supply shortages.

“Irish whiskey has also been a strong performer,” Euromonitor’s report states. “Premium Irish whiskeys are doing especially well, although most growth still comes from category leader Jameson, whose name is synonymous with Irish whiskey to many U.S. consumers.”

Despite the overall dominating success of the whiskey category, DISCUS notes that retaliatory tariffs are causing rough seas on both sides of the Atlantic as the European Union (EU) is imposing a 25 percent retaliatory tariff on American whiskey, the U.S. spirit industry’s largest export market, to tumble by 27 percent in 2019 compared with 2018. Global exports of American whiskey have declined 16 percent and global spirits exports are down 14.3 percent over the same timeframe, according to DISCUS.

“While it was another strong year for U.S. spirits sales, the tariffs imposed by the European Union are causing a significant slump in American Whiskey exports,” DISCUS President and Chief Executive Officer Chris Swonger said in a statement. “The data is clear. These tariffs are chipping away at American Whiskey’s brand equity in our top export markets.”

Despite the tariffs, however, Nielsen CGA’s Matt Crompton, client solutions director, and Max Heinemann, client manager of wine and spirits, predict that whiskey will widen its appeal. “In the months ahead, expect to see more innovative takes on distilling, non-traditional whiskey mash bills, wood aging and distinctly new flavor profiles to attract a broader demographic,” they say.

When it comes to vodka, Nielsen’s Crompton and Heinemann note that the better-for-you movement and new trends might breathe new life into the white spirit.

“Expect to see more diet and sugar-free vodka coming to market,” they say. “We also foresee an increase in flavored, limited-time offerings, reflecting a sharp departure from [the] distastefully sweet offerings of the past. The new age of vodka will infuse more natural and interesting flavors for changing palates, incorporating yuzu and kumquat.”

In its December 2019 report titled “White Spirits – US,” Chicago-based Mintel notes that although the vodka market as a whole is growing, many leading vodka brands are lagging. “Vodka brands are losing customers to Tito’s, a powerhouse brand that experienced a 21 percent increase in volume sales in the past year,” it reports.

Although Mintel’s report notes that product differentiation is difficult within the vodka sub-segment, vodka brands can grow by positioning themselves as a more healthful alternative to other alcohol beverages, e.g., Ketel One Botanical, and by creating vodkas with straightforward flavors made with natural flavorings, e.g., Deep Eddy and Western Son.

Home-grown and hyper-local also can differentiate beverage brands. For instance, each small batch of Dayton, Ohio-based Buckeye Vodka is handcrafted in the rolling hills of Miami Valley, from corn grown on Ohio and Midwestern farms using distilled water sourced from the adjacent Crystal Water Co., for the smoothest tasting vodka to be enjoyed neat or mixed into a cocktail, the company says. The 40 percent ABV Buckeye Vodka is gluten free and available in more than 35 states. 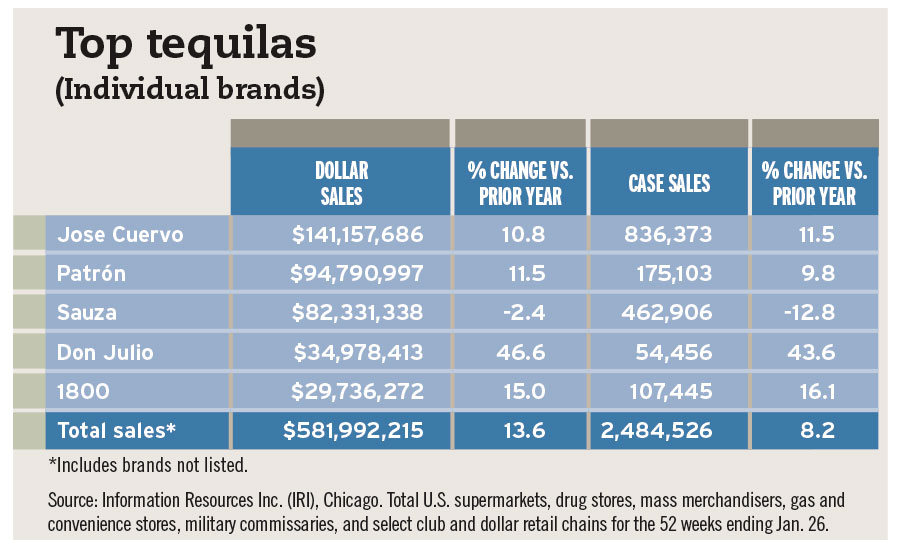 Another white spirit, tequila is one of the fastest-growing spirits, as consumers are gaining a new appreciation for the Mexican spirit, according to Mintel’s “White Spirits” report. Yet, Nielsen CGA’s Crompton and Heinemann suggest tequila faces major turbulence not from sales, but when it comes to sourcing.

“Shortages of blue agave grown in the tequila region of Mexico are forcing manufacturers to find new solutions,” they explain. “In fact, some companies are predicting that tequila production within the next 10 years will be extremely challenging.

“… Outside of mezcal, which is already growing quickly due to its smoky, earthy flavor, raicilla, Barcelona, sotol, and pulque will all find themselves thrust into the spotlight, as they are capable of being produced across Mexico,” they add.

Experts note that the spirits market just like beer, is growing in the high-end segment. For instance, BMC estimates that 78.7 percent of spirits market volume in the United States was sold off-premise compared with 21.3 percent sold on-premise.

Although the majority of spirits products are sold off-premise, BMC’s Lemoine notes that trends are similar in both channels, “as consumers are choosing premium brands in cocktails with fewer, simpler ingredients,”she says.

Lemoine also notes the explosion in ready-to-drink (RTD) cocktails and the segment’s ability to tap into several megatrends: canned products with low- or no-alcohol. “RTDs tend to be lighter in alcohol and lower in calories and sugar,” she explains. “RTD cocktails are premiumizing, as consumers look for unique offerings and diversification, classic cocktails with a modern twist that may be spirits, malt or wine based.”

Danny Brager, senior vice president for beverage alcohol at Nielsen, also notes younger generations are moving to “healthier drinking.” To that end, this year he expects to see growth in spirits and cordials that are lower ABV; lower ABV RTD cocktails; a greater selection of non-alcohol products including craft beers; and active, lifestyle-oriented drinks.

Brager also notes that spirts — driven by the upward trajectory of whiskey, tequila, cognac and RTD cocktails — will increase their momentum.

“Spirits have the advantage of a versatile product range with multiple drink types, flavors, styles and mixing opportunities,” Brager says. “[They] meet the desires of the cocktail culture and appeal to a broad consumer base.”