National Geographic kicked off 2020 with a new iteration of its TV show “Brain Games.” With host Keegan-Michael Key, mentalist Lior Suchard and field correspondent and neuroscientist Cara Santa Maria, the reimagined season challenges A-list celebrities to exercise their brain power. Although the average consumer will not see their own cognitive skills put to the test on cable TV, consumers across every age demographic are noticing the increasing importance of brain health.

“A few years ago, the cognitive health market was dominated by anti-aging supplements marketed toward a select group of consumers,” says Andrew Wheeler, vice president of corporate marketing for FutureCeuticals, Momence, Ill. “Now, people from every stage of life are interested in products with cognitive benefits. And, according to Mintel, each segment has unique needs and goals defined by the demands they face.”

For seniors, those needs include maintaining and improving cognitive function, Wheeler notes.

Along with Alzheimer’s, another cognitive issue is gaining attention: anxiety and stress. “Nearly two-thirds of U.S. adults experienced a cognitive health issue, according to the 2018 Segmentation of the Market for Cognitive Health Supplements report,” Ferren says. “Over half (55 percent) of consumers feel stressed throughout the day, 45 percent worried, and 22 percent angry — the highest level in the past 10 years, according to Gallup’s 2019 Global Emotions Report.”

Steve Fink, vice president of marketing for PLT Health Solutions, notes this is among factors that motivated the Morristown, N.J.-based ingredient supplier to help reach underserved consumers when it comes to cognitive health.

“At PLT Health Solutions, recently we have been focusing on what we consider to be an underserved demographic — the 18-54 age range,” he says. “Within this group, we see intense interest in issues such as ‘peak performance,’ ‘well-being’ and ‘quality of life.’ The market opportunity with this group is massive. Peak performers, including knowledge workers and students, make up 40 percent of the U.S. population and are growing.

“Stress affects 75 million people in this group and the effect of stress on other aspects of cognitive function is significant,” Fink continues. “Similarly, the impact of cognitive performance on other aspects of life is becoming better understood by this demographic — as evidenced by the introduction of ingredients to improve mental performance in exercise via sports nutrition products and as a means of easier weight management.”

Although the need for cognitive health support spans all age demographics, research shows that consumers are seeking solutions from natural sources. 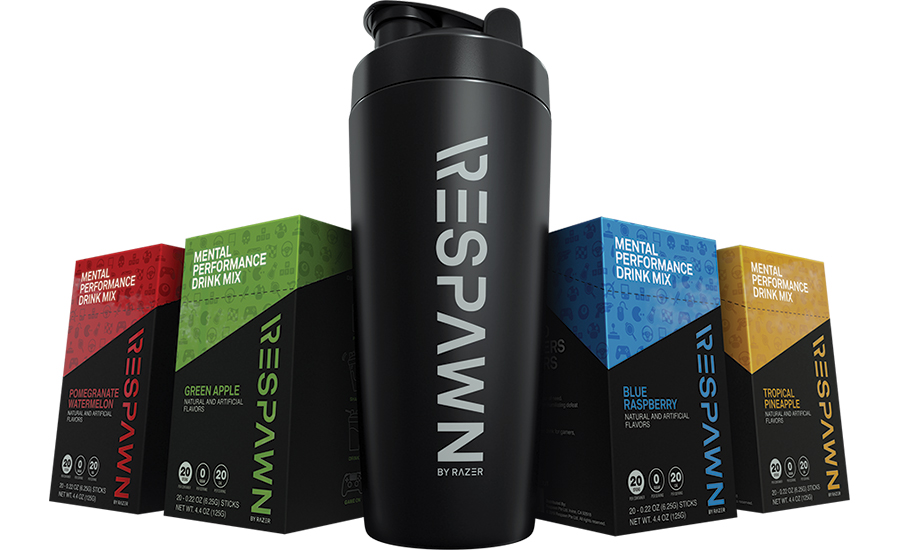 Designed with ingredients like green tea extract, B vitamins, choline, and 95 mg of caffeine to help support increased focus, reaction time and mental stamina, RESPAWN was developed from the ground up for gamers and by gamers, according to the company. (Image courtesy of Respawn Pte. Ltd.)

This holistic approach also is benefiting the supplements industry.

“Holistic wellness trends have shaped every part of the supplement market,” FutureCeuticals’ Wheeler says. “Lines have been blurred between categories as consumers have shifted their focus to achieving overall health.

“For example, the sports nutrition and cognitive health categories have melded together as consumers recognize that improving cognitive performance is equally important as improving physical performance,” he continues. “Rising interest in supplements that help consumers relax and optimize their mental performance shapes new product development into a daily regimen focused on multiple areas of mental health solutions.”

To support consumer interest in botanicals and the like, FutureCeuticals offers NeuroFactor, a botanical derived from whole coffee fruit that has been clinically shown to increase levels of brain derived neurotrophic factor (BDNF), a key neuroprotein known to be vital for learning, memory and higher thinking, Wheeler adds.

PLT Health’s Fink also highlights the influence that natural trends have had on the market, pinpointing the use of origin stories when it comes to marketing to consumers.

“People want to know that an ingredient is natural, traceable, sustainable and is produced via Fair Trade,” Fink says. “For example, all raw plant material used in the production of Zembrin Sceletium tortuosum, cultivated from a proprietary selection of non-GMO Sceletium sp. Sceletium sp., is a protected species and wild harvesting is not sustainable for commercial products. Zembrin is produced only from cultivated plant material to avoid depleting threatened wild plant stocks, and to ensure consistent product quality.”

To support fortification with cognitive-enhancing ingredients, ingredient suppliers are investing in the research to showcase the benefits that can be realized by consumer packaged goods (CPG) manufacturers and ultimately, consumers.

“There has been an increase in beverage-makers offering functional foods to help support cognitive health, especially related to stress,” Ferren says. “Blue California co-sponsored a clinical study with a beverage company to validate the efficacy of L-Tea Active L-Theanine in its beverage on mood responses to a cognitive stressor.

“Using a double-blind, placebo-controlled, balanced crossover design, the primary outcome measure, subjective stress response to a cognitive stressor, was found to be significantly reduced one hour after administration of the active nutrient drink containing 200 mg of L-Theanine when compared to placebo,” she continues. “Analysis of salivary cortisol, the primary hormone product of the hypothalamic-pituitary adrenal axis (HPA axis) secreted in response to a stressor, revealed significantly decreased salivary cortisol response to the stressor three hours post-dose.”

“DHA is a well-known ingredient that fights free radicals and is an important part of healthy brain development. Clinical studies show Cognizin provides vital nutrients that supports brain function by helping brain communication, maintaining healthy neurons and protecting them from free radicals,” said Danielle Citrolo, registered pharmacist and scientific and regulatory affairs director for Kyowa Hakko USA, in a May 2019 statement. “The study showed that combining the two helped prevent further loss of brain cells and improved cognitive functions often damaged following celebral ishcemia. Pairing Cognizin and DHA bridges good with good or the combo looks like it could have potential synergy and further research would be interesting.”

As more research is dedicated to ingredients’ impact on the brain, suppliers suspect this will open up more opportunities for the cognitive health market. “Research demonstrates that altering the types of bacteria in the gut may make it possible to improve brain function,” FutureCeuticals’ Wheeler says. “More research is needed to determine how prebiotics and probiotics, or ‘psychobiotics,’ may work with the brain-gut axis, but that is an innovative area that will be hot in the coming year.” BI

Cognitive health appeals to all demographics