As consumers continuously become wary of sugary beverages, they are seeking out healthier substitutes. For many, ready-to-drink (RTD) teas have become the answer. One sub-segment of RTD teas that seems to be appealing to the masses is kombucha — a tea that has been fermented with bacteria and yeast, and is rich with probiotics, antioxidants, amino acids and enzymes. Known for its healthy-halo mantra, kombucha is moving away from a niche product to one of the fastest growing categories in the beverage market.

A December 2018 Insights from New York-based Nielsen confirms this fact. In its report, “Tops of 2018: Organic” the research firm notes that the kombucha category reached more than $412 million in sales in 2018, marking a 42 percent increase compared with the previous year.

“Known only to a niche audience a few years ago, today this probiotic and functional beverage is winning the hearts of consumers across America,” the Insights says.

Mintel references Purchase, N.Y.-based PepsiCo’s 2016 acquisition of KeVita as a likely contributor to the mainstream awareness of kombucha among consumers.

Roger Dilworth, senior analyst at New York-based Beverage Marketing Corporation (BMC), also points to the mainstream status of kombucha as a contributing factor to its success. “The meta-trend of kombucha becoming more mainstream continues,” he says. “It has evolved from a West Coast health food phenomenon to a broader audience of ‘regular’ people looking for a health edge.”

The “health edge” of kombucha also can be attributed to its growing success in the market. “[P]roducts like some high-antioxidant green tea beverages and kombucha have been designed to specifically attract health-conscious customers; as a result, these products introduce RTD beverages into markets where they may not have been prominent before, such as health food stores,” says Los Angeles-based IBISWorld in its December 2018 “RTD Tea Production in the US” report.

“This simultaneous and synergistic development of product lines and new markets contributes to the [tea] industry’s overall growth,” it adds.

Holly Lyman, queen bee at Cottonwood, Ariz.-based Wild Tonic, also notes the healthy-halo draw of kombucha. “The conventional soda as well as the craft beer categories continue to lose shelf space to these new ‘better-for-you’ categories, such as traditional kombucha and hard kombucha,” she says.

“The acceptance and placement of kombucha in the conventional grocery channel has brought it into the spotlight as people seek healthier beverage alternatives,” she continues.

The market has seen a number of label redesigns from leading brands like Revive, Brew Dr. and Health-Ade, introductions of new product lines from GT's Living Foods, as well as the continued proliferation of new flavors, Beshkov, Mochulsky and Winslow say.

“The expansion of product offerings and the refinement of labels shows the category is continuing to grow and get more competitive,” they say. “The emergence of new entrepreneurs and businesses shows that kombucha has become an established category, and that interest in it is a global trend.”

The success of the RTD tea and kombucha category not only comes from the rise in health-aware consumers, but also from an increase in disposable income, according to IBISWorld’s report. “[A]s discretionary income increased steadily, it also boosted industry revenue at a balanced pace,” it says. “As industry revenue grows, new companies are rapidly entering the industry.”

Health-Ade’s Beshkov, Mochulsky and Winslow also highlight how increased consumer income has affected the category. “Fermented beverages carry a higher dollar ring than other beverages and have been growing where other categories have declined,” they say. “This is great for retailers, who have dramatically expanded their kombucha sets, and for consumers, who have more and better healthy beverage options.”

The rapid proliferation of kombucha has disrupted the RTD beverage category. “With the exception of bottled and sparkling water, many large beverage categories have seen long-term declines, whereas kombucha has grown by more than 30 percent for each year for the past decade,” Beshkov, Mochulsky and Winslow say.

Tea of the future

When it comes to whose drinking the fermented teas, consumption largely can be attributed to younger generations, experts say. “Millennials consume a tremendous amount of kombucha, as well as Generation Z, who are both looking for products that are healthier and contain less alcohol,” says Wild Tonic’s Lyman.

“The idea of ‘social drinking’ has given way to a younger generation who prefers to be plugged into social media, instead of going out for a drink,” she adds. 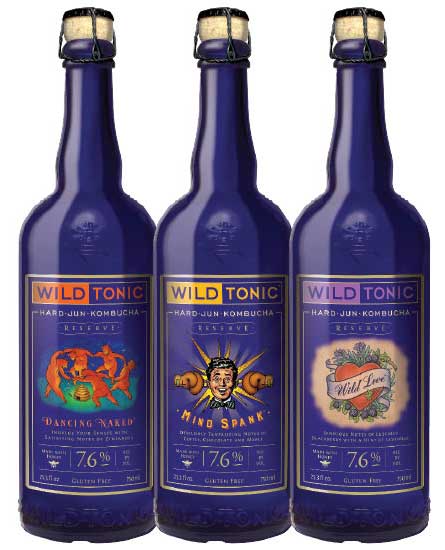 Health-Ade’s Beshkov, Mochulsky and Winslow also put kombucha consumers into a similar profile, noting they are healthy-engaged consumers. They also are college-educated, have disposable income, live in cities, and work in jobs in new industries. It is a group that includes both men and women (slightly more female), largely in the age range of 24-40, they add.

However, kombucha has the potential to reach a wider audience, according to Mintel. “Forging associations between teas [like kombucha] and specific functions and even occasions, will resonate with a growing group of consumers who actively seek out means to manage their well-being, both emotional and physical,” the report states.

As consumers seek out healthier non-alcohol RTD beverage alternatives, they likely are exploring similar options in the alcohol category. The trend toward healthier alcohol-based drinks and even alcohol substitutes that can be consumed in an adult setting likely will make this a trend, BMC’s Dilworth notes.

“Alcohol kombucha is the new ‘go-to’ beverage for the younger generations and so it will be a lot like craft beer or wine in America when those sectors blossomed and came into their own,” Wild Tonic’s Lyman says.

For example, in fall of 2018, Wild Tonic released three varietals of its Hard Jun Kombucha: Wild Love, Dancing Naked and Mind Spank. Each variety features a 7.6 percent alcohol-by-volume content and is fermented with certified organic fruit, herbs and botanicals, the company says.

Health-Ade’s Beshkov, Mochulsky and Winslow also see the budding potential for alcohol kombucha. “The products are good, play on the same healthy trends as kombucha, and touch an untapped alcohol consumption occasion that regular kombucha (with just a trace amount of alcohol from fermentation) isn’t particularly well-suited for,” they say.

“Within a few years, you may be able to walk into your favorite bar and find a handful of alcoholic kombucha options, like you see with craft beer now,” they add.

Looking to the future, experts predict that consumers will find more kombucha innovation, expanded flavor offerings and distinctive packaging that will help brands stand out on store shelves. BI