Brands redesign packaging to give premium brands a premium look

IPAs for the holidays

Arriving just in time to make “jingle bells rock,” Dogfish Head is bringing “joy to the world” with the release of its IPAs for the Holidays variety 12-pack. The limited-edition holiday 12-pack contains four varieties in one box and features two exclusives, Sixty One and Viniferous IPA, along with 60 Minute IPA and 90 Minute Imperial IPA, the company says. The holiday pack includes an homage to “reds and whites” for the vino lovers in the bunch as the “white” beer-wine hybrid, Viniferous IPA, is fermented with Riesling & Viognier grape must and hopped with Hallertau Blanc, Huell Melon and El Dorado to match the dry, fruity complexity of a Riesling with the hoppiness of an IPA, it adds. Sixty One, the “red” beer-wine mashup, is a marriage of two beer-wine hybrids featuring Syrah grape must and continually hopped IPAs. The limited-edition variety pack also features a special gift tag that can be personalized.

Here’s to the legends

Sailor Jerry Spiced Rum introduced a limited-edition American Legends pack, a nod to the brand’s namesake, Norman “Sailor Jerry” Collins, and Harley-Davidson. The pack is wrapped in sleek black leather, embossed with both brand’s joint logo, and includes one 750-ml bottle of the American-made spiced rum that is blended with spices including ginger, cinnamon, clove and vanilla. The co-branded offering follows the pair’s two-year partnership and celebrates both brands’ true American spirit, the company says. The pack reflects the iconography of Norman Collins and his beloved Harley-Davidson bikes, which he was known to ride, it adds. “Norman Collins’ and Harley-Davidson’s legacies have long been rooted in Americana,” said Sailor Jerry Spiced Rum Senior Brand Manager Josh Hayes in a statement. “The American Legends bottle is a celebration of that spirit and of Norman Collins and Harley-Davidson as cultural mainstays.”

The spiciness of ginger 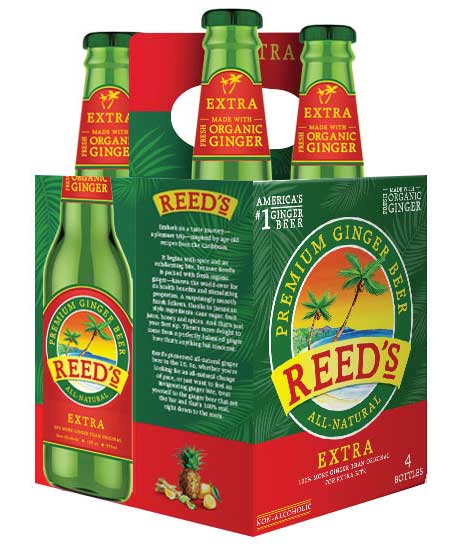 Reed’s Inc., makers of all-natural Reed’s Ginger Beer and Virgil’s Handcrafted Sodas, recently unveiled a new package design for its flagship line of ginger beers. The brand refresh for Reed’s follows in the footsteps of the company’s overhaul of its Virgil’s soda line earlier this year. The new look for Reed’s will be available nationwide in more than 30,000 retail locations beginning in early 2019. Among the changes, the new design puts the Reed’s name front and center, more clearly highlighting the levels of ginger intensity in each of the three varieties (Original, Extra and Strongest), while maintaining the bold, island-inspired theme that helped establish the brand as America’s No. 1 selling ginger beer, the company says. Also new for Reed’s will be the addition of 12-ounce cans, which will facilitate the brand’s expansion into new channels, including on-premise, club, drug and convenience stores. The brand also will launch a new varietal: Zero Sugar Ginger Beer. The revamped packaging will help consumers who might be new to ginger beer better understand the ginger “bite” while still leveraging the island vibe that longtime fans of Reed’s enjoy, the company says.

A toast to love & laughter

Just in time for holiday toasting, Prestige Beverage Group is launching a new, stylish and convenient 187-ml offering of its Rista wine brand, Moscato d’Asti. Initially only offered in 750-ml and limited-edition 1.5-liter packaging, the new Risata 187-ml packaging features Moscato d’Asti’s award-winning sparkling wine in an elegant-yet-sleek design with a stelvin closure that gives consumers a touch of luxury while eliminating waste and the need for a corkscrew, the company says. The wine’s sweet and juicy flavors of peach and apricot combined with hints of honey and citrus elevates the trendy new bottling, which will be available year-round for a suggest retail price of $5.99, it adds. 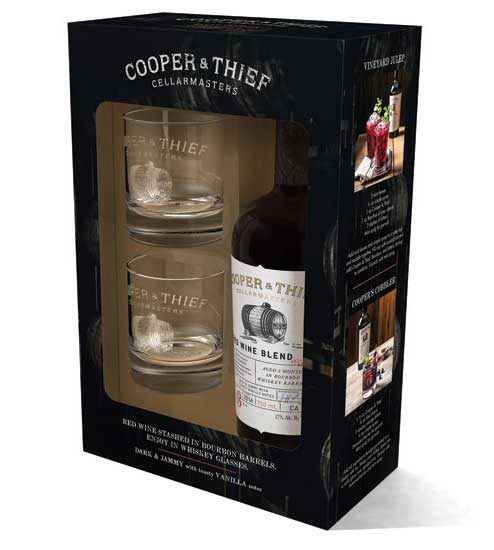 Just in time for the spirited season, Cooper & Thief Cellarmasters is releasing a limited-edition Cooper & Thief Red Wine Blend Holiday Gift Pack. The gift-ready set includes a bottle of the 2016 Cooper & Thief Red Wine Blend, two festive Cooper & Thief based cocktail recipes, and two whiskey glasses all ready for upcoming holiday enjoyment. Crafted with the whiskey drinker in mind, the California Red Wine Blend is aged for three months in former bourbon barrels, boasting soft velvety tannins with a subtle heat, the company says. Stashing the Red Wine Blend in former bourbon barrels imparts hallmark bourbon flavors and aromas, which combined with the tannins of the dark and jammy red result in a rich flavor with a long, lingering finish, it adds. The bottle features a spirits-like shape that catches the eye, the company says. 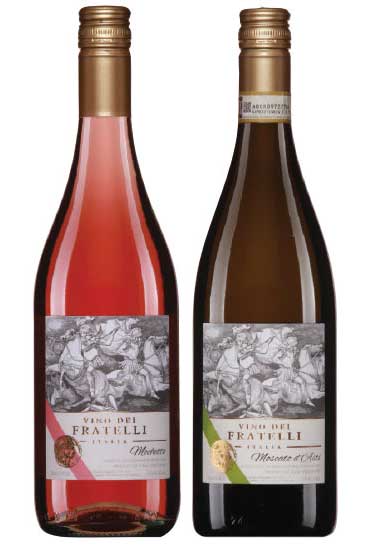 Quintessential Wines announced new packing for its Vino dei Fratelli brand, which was created by the father-and-sons leadership team of Steve Kreps Sr., Dennis Kreps, and Steve Kreps Jr. Vino dei Fratelli, which translates to “Wine of the Brothers,” features a new label that was inspired by the image on an ancient Roman coin of the famous brothers Castor and Pollux who, together, symbolize the ideal of brotherly love, the company says. The new packaging features a dramatic battle scene from an 1879 engraving by John Reinhard Weguelin. It depicts a Roman legend in which Castor and Pollux are transformed into two young knights who battled so bravely together that they spurred on the army of the Kingdom of Rome to a legendary victory at the Battle of Lake Regillus in the early 5th Century B.C., the company says. “The new Vino dei Fratelli labels make a strong statement about the bonds between brothers and the power of family,” said Dennis Kreps, in a statement. “Each of the wines under this brand has been made in proud partnership with a family owned Italian winery that represents the top quality of their respective region.” 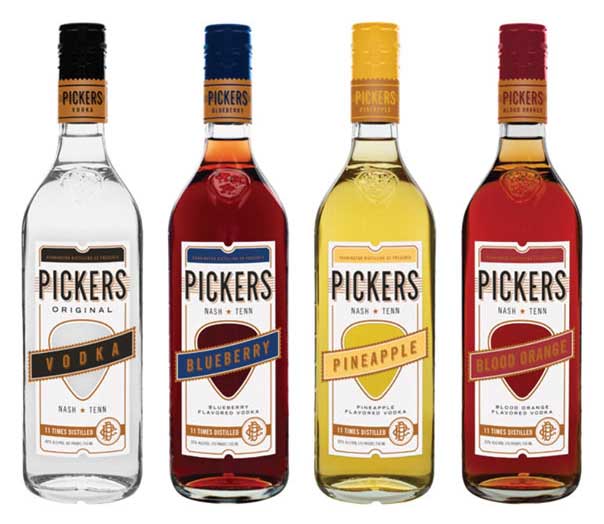 Pennington Distilling Co. announced that its Pickers Vodka has undergone a brand and packaging refresh. Berlin Packaging and design studio, Studio One Eleven, utilized a clear glass bottle that prominently features a messed guitar pick bearing the iconic three stars of Tennessee’s state flag near the bottle’s neck. To further reinforce the musical connections and influence, two sides of the bottle are embossed with the neck of a guitar, giving Pickers a unique look from nearly every angle, the company says. The new bottle was designed to distinguish itself from other premium brands while simultaneously paying tribute to Pickers’ hometown of Nashville and the musicians whose sounds fill the air. The flavored vodkas now are available in 1-liter and 750-ml bottles. Because of the brand redesign, distribution has expanded to 17 states nationwide, it adds. “Rebranding for us was an exercise in brand enhancement,” said Jeff Pennington, founder and chief executive officer of Pennington Distilling, in a statement. “Our well-established, premium product deserves premium packaging. Therefore, we decided to introduce a custom bottle and packaging for the consumer to enjoy our handcrafted vodka, proudly made in Nashville, Tenn.”