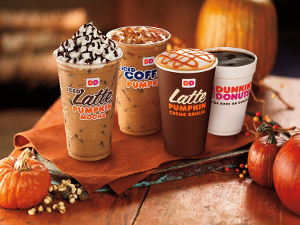 The pumpkin-flavored drinks and foods began rolling out into Dunkin’ Donuts restaurants Aug. 25 and will be available for a limited time.

Furthermore, Dunkin' Donuts is bringing its seasonal celebration to Twitter with a "PumpeDD for Pumpkin" Twitter sweepstakes. Through Aug. 27, fans can share which Dunkin' Donuts pumpkin menu item they are most “pumped” to try this fall, using the hashtag #PumpkinAtDunkinSweeps. Those who participate will be entered for a chance to win one of seven $50 Dunkin' Donuts mGifts. For official rules and additional information about the sweepstakes, visit http://dun.kn/1saDEbj.