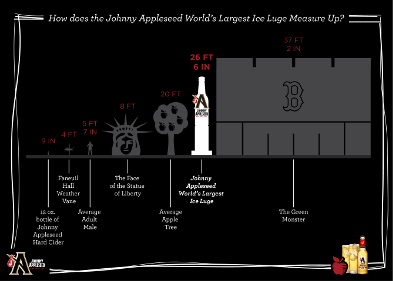 Johnny Appleseed Hard Cider’s attempt at the world’s largest ice luge will stand at least 25 feet high, surpassing the current record holder by 2 feet, span 4 feet wide and weigh 25,000 pounds, the brand says. To top it all off, a 16-foot replica bottle of Johnny Appleseed Hard Cider will sit atop an 8-foot platform, it says. The structure will take an estimated 600 man hours to complete from start to finish, it adds.

“Johnny Appleseed is literally taking the summer party season to new heights,” said Eli Aguilera, marketing director of high-end brands at Anheuser-Busch, in a statement. “We already know that Boston knows how to throw a party, so there is no doubt that the Seaport District is the perfect spot to host the history-making world’s largest luge.”

The brand will host a promotional event for the record-setting ice luge 7 p.m. on June 19 in Boston’s Seaport District. Fans of legal drinking age can RSVP for the event by visiting www.events.thrillist.com/johnnyappleseed. Guests will be granted exclusive access to the ice luge and an intimate concert with a major music act to be announced in the coming days.

Those outside of Boston or otherwise unable to visit the ice luge in person can log on to the Johnny Appleseed social media channels for exclusive video and photos from the event, including a time-lapse video that compresses the ice luge 600-hour build time to 60 seconds.

When the ice luge melts, the up to 1,800 gallons of water used to construct the luge will be donated to the Johnny Appleseed Trail Association to water the trees and flowers along the trail, the brand says.