Tequila is gaining interest among consumers across the globe. The global demand for the drink is rising at a significant pace year-over-year. Exports of tequila from Mexico grew at a compounded annual growth rate of 4.5 percent in the past five years.1 On the other hand, agave, the raw material that is used to manufacture tequila, is expected to face a severe shortage in the near future. The price of agave is expected to rise by more than 100 percent by 2018 compared with the current levels.1 Distilleries must equip themselves to mitigate the anticipated risk resulting from this rising cost of raw materials.

Small and medium-sized distilleries are expected to be significantly affected. However, the rise of the raw material’s price is expected to have a relatively smaller effect on large distilleries due to secured agave supply through contract farming. Therefore, these distilleries could explore opportunities to expand their existing manufacturing capabilities during the anticipated crisis situation.

Unable to withstand the rising production cost, a significant number of small and medium-sized distilleries could shut down or sell their facilities between 2015 and 2018. Large distilleries could capitalize on the situation and expand their manufacturing capabilities by leasing, renting or buying these facilities.

Background
Undoubtedly, the tequila market is gaining strong momentum across the globe. Shipments of tequila from Mexico — the only country that produces the drink — are rising significantly year-over-year. With the global economy expected to be back on track in the near future, demand for tequila is expected to increase further. On the other hand, blue agave, the raw material that is used to produce tequila, is taking a different turn in Mexico.

A spirit can only be called tequila if it is produced from blue agave grown in the five states of Mexico: Jalisco, Guanajuato, Michoacán, Nayarit and Tamaulipas. Agave takes eight to 10 years after planting to be ready for harvest. Therefore, the industry might not be the same during harvest as it was during the planting season. The tequila industry is expected to face a severe rise in production cost due to a shortage of the raw material in the near future. 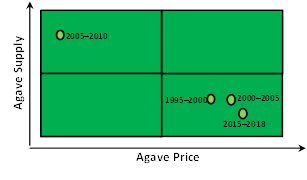 Current agave production is dependent on the market conditions that prevailed eight to 10 years ago. Prices of blue agave tend to follow a cycle of crests and troughs at intervals of every eight to 10 years. For example, prices of blue agave soared significantly during the late 1990s and early 2000s. Production for the next harvest sky-rocketed as famer margins increased significantly. Thus, existing farmers invested significantly during this season and planted more than three times the average amount. High margins also attracted new entrants into the industry, which set the stage for historical peak production levels and an over-supply scenario during the 2005-2010 time period. This resulted in a drop in prices of blue agave by more than 85 percent in 2010 when compared with the previous peak level in 2002.2 Thus, agave production decreased drastically and is expected to result in a severe shortage of tequila raw material in the 2015-2018 time period. As a result, prices of agave are expected to increase significantly, leading to a severe rise in cost for the tequila manufacturers. 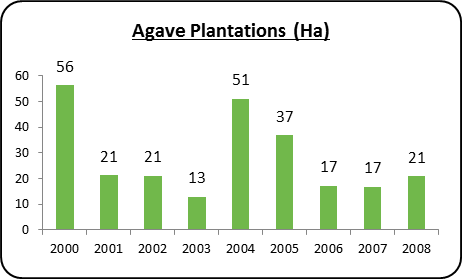 Agave production in any season is directly dependent on the farmer margins enjoyed during that season. During the 2005-2010 period, prices started falling to an extent that the farmers incurred heavy losses. Prices even went below the production cost in 2006 and 2007.2

Additionally, many farmers destroyed their fields by burning out their half-grown crops during 2006 and 2007 to plant corn. Corn prices soared during these years because of strong demand for the crop in bio-fuel production in the United States.3 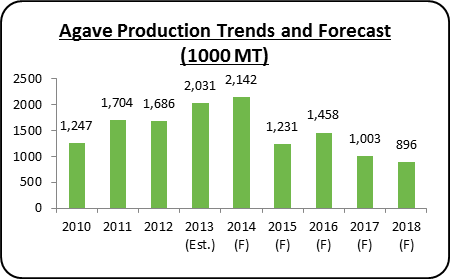 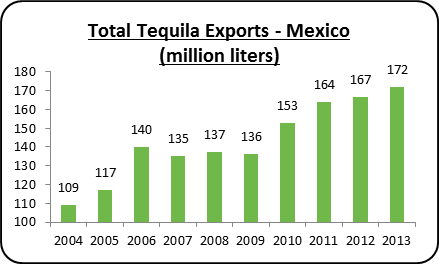 The majority of tequila demand in Mexico comes from the export market. In 2013, Mexico exported 76 percent of its total tequila produced.1 There are two types of tequila: 100 percent tequila and tequila bulk or 51 percent tequila. In the former, all of the sugar that is used to produce the drink is agave, and in the latter, 51 percent of the sugar is agave and the rest could be any other sugar. One hundred percent tequila is not allowed to be exported in bulk, whereas 51 percent tequila is allowed to be exported in bulk and bottled in the export destination. Demand for both of these tequila types is expected to rise at a rapid pace in the near future, as interest in the drink among consumers is increasing globally.

Demand for the drink is expected to further rise with China removing the ban on Mexican 100 percent tequila in 2013. The ban was originally imposed because of tequila’s high methanol content. The United States was the largest importer of tequila until 2012, accounting for approximately 75 percent of the export market for Mexico.5 China is expected to grow as the second largest importer by the end of 2018, importing more than 10 million liters.5 Thus, rising demand for the drink is expected to keep the distilleries running at almost 100 percent utilization rates. However, the rising price of the raw material is expected to pose a severe threat to the industry.

Agave procurement
Agave procurement differs within the industry based on the size of the distilleries. Large distilleries secure their agave supply by either contract farming on leased land or farming on their own lands, thereby vertically integrating the entire process. These large distilleries secure 80 percent of their agave supply through contract farming. The remaining 20 percent is procured from small, independent farmers to capitalize on low-price situations.

On the other hand, relatively small distilleries procure all their agave requirements from independent farmers. These distilleries were largely benefited in the past five to seven years and capitalized heavily on the low-price scenario that prevailed in the industry.

However, this situation is expected to reverse during the 2015-2018 period, with agave prices expected to rise significantly. Independent farmers are expected to benefit largely from these conditions. On the other hand, the large distilleries are anticipated to be minimally affected as the contracted farms are planned for smooth supply across years at agreed prices.

Way forward for distilleries
The anticipated price increase of agave is expected to have mixed effects on the distilleries, depending on the size of the distillery and their current operational modes.

Large distilleries:
Because the large distilleries have their agave supply secured through contract farming, effects on them should be minimal. Those distilleries that generally procure 20 percent of their agave every year from independent farmers should avoid procuring from them in the next three years and instead procure all their agave requirements from contracted farms at agreed prices. However, these farmers are expected to demand more for their produce in the coming years as they see their neighboring independent farms earn two to three times more. In such circumstances, the large distilleries must be open to paying a premium on the produce to partially match the prices received by other farmers. This would help avoid contract violations by the farmers. The agave industry has faced situations of contract violations during previous high-price scenarios.

On the other hand, these large distilleries could capitalize on the high-price scenario and acquire small and medium-sized distilleries that would shut down, unable to withstand the severe rise in cost in the coming years. This will be discussed in detail toward the end of this article.

Medium-sized distilleries:
Medium-sized distilleries possess the potential to withstand the severe rise in raw material costs. Their ability to compete with large distilleries in such high-cost scenarios is expected to go down. Distilleries that buy all of their requirements from independent farmers must engage in contract farming immediately to mitigate the high-price risk. Farming on their own land would cost more than the anticipated rise in the cost of raw materials. Thus, these distilleries could engage in contract farming on leased land over a period of time at agreed prices. However, it is a tough challenge to get farmers to sign a fixed price contract when the whole industry is expecting prices of agave to skyrocket. These distilleries will be forced into a situation of paying high prices to farmers in the next three to four years. They must fix the contract prices at an optimum level that would enable congenial profit margins for the farmers and low price fluctuation risk to the distilleries.

The only strategy that would prevent these distilleries from a shutdown is producing more 51 percent tequila, thereby incurring a relatively low cost of raw materials. In 2000, the Mexican Trade Department, with the National Chamber of the Tequila Industry and the Mexican Institute of Intellectual Property, came up with an emergency regulation to reduce the minimum inclusion level of agave in tequila. The minimum inclusion level of 51 percent was brought down to 30 percent, thus enabling smaller distilleries to stay in business by consuming lower quantities of expensive raw materials. These distilleries could approach the regulatory bodies and look forward to the introduction of such emergency regulations to help themselves from exiting the industry.

On the other hand, the smaller distilleries must equip themselves to operate or produce tequila using alternate sugars. 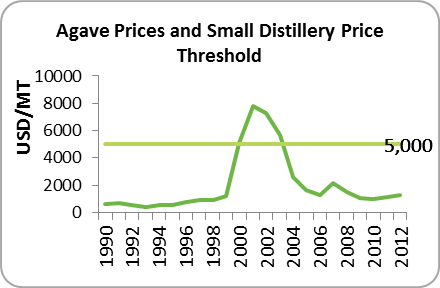 Although the raw material costs are expected to increase moderately for the larger distilleries, certain opportunities are available that these distilleries can explore.

Larger distilleries could have the opportunity to buy, rent or lease these small and medium-sized facilities over a period of time. On the other hand, these large companies could engage in a third-party production agreement for their brands in these facilities.

With the rising demand for premium tequila brands across the globe, large distilleries could be forced to expand their manufacturing capabilities in the near future. Paying marginally higher for the raw materials is almost unavoidable for the large distilleries in the next three to four years. However, these distilleries could explore such opportunities to scale up their operations to satisfy the rising demand for tequila in the future. The high cost of raw materials incurred during the period could be compensated by increased sales at price premiums resulting from scaled-up productions. Therefore, the price of tequila is expected to rise with the rising cost of raw materials in the near future.

Key inference
The tequila industry must equip itself as soon as possible to withstand the effects of a rise in raw material costs. Small distilleries have already started to sense the brunt of rising raw material prices resulting from speculations. Although it is a challenge for mid-sized distilleries to identify farmers with crops ready for harvest during the 2015-2018 period, contract farming is the only way out for these distilleries. On the other hand, large distilleries that are expected to face minor effects from the rise in cost could explore opportunities to expand their operational capabilities during such crisis situations.