Bob Marley composed and sang songs infused with his sense of spirituality that to this day still resonate with a wide audience. Years later, his son Rohan Marley has found a way to embody the principles that his father sang about through his company Marley Coffee Co. 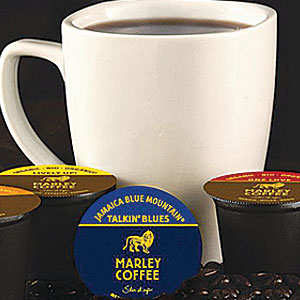 “The motivation started … from a farm perspective,” says Rohan, founder and chairman of the company.

Located in the Jamaica Blue Mountains, Rohan purchased the farm in 1999, which has been certified organic since its inception.

“We talk about why we even went this way, and it starts in the beginning with a farm — our own farm,” he explains. “It’s important to me that whatever we’re practicing and want with our land, it also should be beneficial to people’s lives. I didn’t want the farmers to be in danger by utilizing chemicals on the land. Plus myself, [I] talk about sustainability [and] that I wanted to make sure that our way of life is also practiced in our business … so we had to do things the organic way.”

In addition to sourcing coffee from its own farm, Marley Coffee also sources from cooperatives that embody the same practices the company utilizes on its own land, says Brent Toevs, chief executive officer of Jammin’ Java.

“When you buy from a co-op, a lot of the time it’s a lot of independent farmers that belong to that co-op, and when you buy direct from them, you cut out those middle men,” he explains. “They get more money, and that money then goes back into building schools, college scholarships, school uniforms — you just see tremendous improvement in the quality of not only the lives of the people that are working there, but you’re also bringing best practices to the farming communities.”

“Up until a few months ago, all of our coffees were only certified organic, and we’re moving now into a relationship with the Rainforest Alliance organization,” he says. “As we look to expand the brand, we wanted to find out what are some sustainable coffees out there that we might be able to be associated with.”

Hoping to embody the Rastafari principles that his father preached in songs in his coffee company, Rohan connected the names of Marley Coffee’s individual varietals to some of those popular songs.

“The names, to myself, they kind of have some relevance,” he says.

For example, the brand named its Ethiopian Yirgacheffe coffee One Love to symbolize the birthplace of coffee, civilization and Rastafari, he explains.

Rohan used a similar idea for the brand’s decaf product. “In the ‘60s when there was a lot of violence going on in Jamaica, my father wrote this song called ‘Simmer Down,’ and we chose Simmer Down in reference to decaf like something that would simmer you down,” he says.

Rohan also connected mood and music with the coffee names for the brand’s lightest roast, Get Up, Stand Up, which is classified as a medium roast, and Mystic Morning for its coffee that offers a morning jolt.

“We try to transcend just the feeling about doing something good and being responsible,” Rohan says. “It’s all about the mood that we want, and that’s really one of the key points … in relation to the songs.”

Toevs adds that when members of the company are attending live events like tastings and promotions, Rohan and others will listen to Bob Marley’s music in preparation.

“You see the passion that that music brings to [Rohan] and [that] it does to other people,” he says. “We have a brand that is full of passion [that] inspires [and has] transformed people’s lives, so we try to do that now with our coffee. It relates, and people feel good about drinking our coffee. It’s incredible.”

Rohan echoes similar sentiments. “When we’re going to tastings, I listen to my father’s music because it puts me in a certain mood, so I always want to maintain that, and such is our coffee,” he says.

Although they have only been in the market less than a year, RealCups have become the brand’s top-sellers, Toevs says.

“The RealCups, the single-serve, that’s what’s leading the way,” he says. “You look at the coffee category, [and] it’s an unstoppable train right now with the tremendous year-over-year growth, so our single-serves are leading the way as far as top-selling SKUs.”

Its top single-serve seller is One Love Ethiopian Yirgacheffe; however, its limited-supply varietal Talkin’ Blues Jamaica Blue Mountain also is very popular in the North American market, he says.

“There’s only so much of Jamaica Blue Mountain — it’s a very limited supply,” Toevs explains. “While it’s not one of our top sellers as far as by volume, we’re actually selling out of all of our allotments.”

This popularity coupled with Rohan’s passion actually led to one of the brand’s upcoming varietals, Smile Jamaica, which is a Jamaica Blue Mountain blend.

“We work really closely with the Coffee Board of Jamaica because we really do want them behind our brand, and we want to show them that we really are marketing this brand in North America, growing the brand in North America, and doing it under their guidelines,” Toevs says. “We feel that is very, very important, so when [Rohan] came up with the idea for Smile, you think about Jamaica Blue Mountain coffee, [and] there’s only a couple of million pounds to go around every year. What Smile does is it lets us do that blend and make it available to more [consumers].”

The company plans to launch Smile Jamaica at Natural Products Expo West, which will take place March 6-9 in Anaheim, Calif. In addition to Smile Jamaica, it also will release its Rainforest Alliance certified varietals in RealCups and bags as well as Catch of Fire, a chili-infused coffee.

In addition to its focus on new product releases, Marley Coffee also is focusing on its distribution models. At this time last year, the brand was in about 300 stores. As of November 2013, it was authorized in 8,000 retail outlets.

“We keep saying it’s exponential, and we want to keep that growth curve going,” Toevs says.

Available nationwide through some national distributors like KeHE and UNFI, Marley Coffee also works with a number of regional distributors and in other channels like hospitality, coffee service and break room.

“We think there’s about 36,000 points of distribution in the retail grocery category alone, so if we’re at 8,000, we want to continue to expand there,” Toevs explains.

By this time next year, Toevs says that the company aspires to be in 16,000 retail channels. The company also is looking to expand its presence with BikeCaffé. It has been working on this concept for the last couple of years, Toevs says, and plans to execute it in the not-too-distant future.

“[Rohan’s] got just a small, little goal, and that’s for Marley Coffee to be available anywhere in the world where people want to drink coffee,” he says. “When you think about that, we have a lot of work to do, but we’re up to the task.”

When it comes to new products and brands, sometimes the best way to market those products can be through in-store activations.

“Most of our marketing dollars are spent to help build those in-store sales,” he says. “When you go into a retailer and you get accepted, you have to commit to all of the market programs. It’s one thing to get that product on the shelf; you also have to move that product off the shelf.”

Toevs notes that although those programs vary by retailer, demos and activations have been successful for the brand.

But the company also recognizes the power of social media, not just for its brand, but also relating to its Founder and Chairman Rohan Marley, son of the late Jamaican singer and songwriter Bob Marley.

Whether it’s announcing new distribution or promoting a contest, the company will synergistically promote Marley Coffee through its own Facebook and Twitter accounts as well as Rohan’s account, which has more than 92,000 followers as of Dec. 2.

“I think that’s the best because, with us, together we have a lot of outreach with social media,” Rohan says.

The company also will utilize social media to promote its co-branded truck that will travel throughout New York City this winter. “We’ll use social media to update where the location is and maybe even do some couponing,” Toevs says. “It’s pretty exciting.”