For the first time in more than a decade, Danone Group’s Evian Natural Spring Water redesigned its bottle. The new design leans on transparency with sleeker, 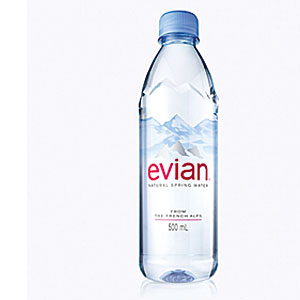 cleaner lines to celebrate its pure, natural contents, the company says. The bottle sports a label-less look, featuring a simplified version of its previous logo design on the front of the bottle, which now showcases a panoramic image of mountains representing the water’s French Alps origins, it says. The bottle’s new, simple shape and beveled mountain ridges further hearken back to the French Alps theme, it adds. The back of the bottle features the Evian story, and the brand’s name is carved into the bottle’s base. The new bottle design is available in a 500-ml size, and additional formats are slated to debut in the next year.