For years, dairy-alternative beverage manufacturers worked to educate consumers about the benefits of their offerings. Today, those beverages have become mainstream, signifying a new era for the dairy category.

“The rise and disruption of plant-based dairy alternatives have been steadily building for many years,” explains Dewey Warner, research analyst for London-based Euromonitor International, in a Natural Products Insider article. “Most notable is the category’s recent evolution, from a rapidly growing upstart sector to one with widespread availability and mainstream appeal. In a way, this signals the onset of the second generation of plant-based alternatives, beyond merely acquainting Americans with the idea of consuming plant-based products and focused on expanding the sector to new frontiers and diversifying its offerings.”

Exemplifying the expansion of plant-based milk offerings, oat milk has taken the category by storm. In the past year, oat milk was up 95%, according to John Crawford, vice president of client insights for dairy at Chicago-based IRI Worldwide. It even surpassed soy milk, becoming the second most-popular plant-based milk (almond milk is No. 1).

Many consumers enjoy oat milk because it provides fiber and a texture similar to dairy milk, he notes.

Nevertheless, almond milk remains the top performer in the dairy-alternative market, accruing just more than $1.5 billion in sales during the 52 weeks ending Sept. 5, 2021, in U.S. multi-outlets, according to IRI data. By comparison, the oat milk segment earned about $350 million, Crawford says.

Approximately 40% of U.S. adults purchase almond milk, says Dasha Shor, global food analyst and registered dietitian for Chicago-based Mintel. This is a close second to regular unflavored dairy milk, which is the most purchased dairy drink, she notes.

“As the most commonly purchased dairy-alternative milk segment, almond milk currently ranks highest in associations with important attributes, such as nutritious and good tasting, and good for common use cases like cooking and in coffee,” she says.

The almond milk segment increased 2% in dollar sales in the 52 weeks ending Sept. 5, according to IRI data. However, not all dairy segments have been so lucky. Originally the top contender in the dairy-alternative space, soy milk declined 8.4% during the IRI-measured timeframe. According to Euromonitor research, soy drinks are losing ground because of poor perception of the ingredient by consumers. Refrigerated coconut milk also delivered lackluster sales, with a 6.3% decline in dollar sales during the IRI-measured timeframe. 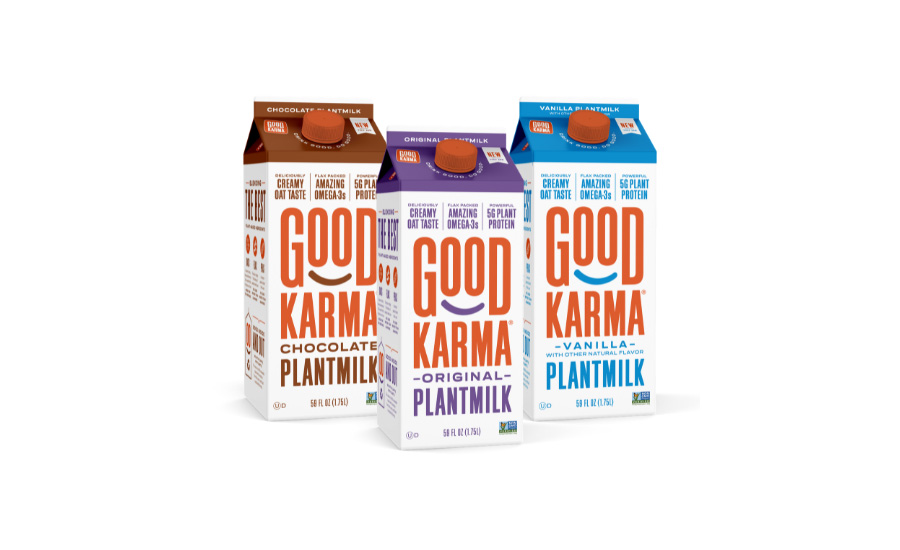 Emerging ingredients like pistachios and barley also are making an appearance in the dairy-alternative arena. At the end of 2020, New York-based Táche Pistachio Milk launched its flagship beverage. This past summer, Portland, Ore.-based Take Two Foods released its Barleymilk in Original and Unsweetened varieties.

Euromonitor’s Warner notes that concerns regarding the environment, animal welfare and health continue to entice many consumers to purchase plant-based beverages instead of traditional dairy. Furthermore, the increased risk posed by COVID-19 to consumers with obesity and other health conditions has led consumers to prioritize their health even more, according to a Euromonitor press release.

Mintel’s Shor agrees, noting: “The pandemic has accelerated the pace at which consumers are refocusing their diet around plants. In 2020, nearly half of total dairy-alternative category consumption was motivated by personal or household allergies and intolerances. In 2021, this motivator moved down to the No. 5 position, overtaken by purchase motivators related to health perceptions, variety and general plant-based eating aspirations.”

Although the pandemic has helped the dairy-alternative segment, it’s had a mixed effect on the dairy segment. For instance, the prevalence of eLearning resulted in lost school milk sales, hurting the segment; however, more people staying at home also helped the segment, notes Gary Hemphill, managing director of research for Beverage Marketing Corporation (BMC), New York.

The largest dairy segment, refrigerated skim/low-fat milk, declined 2.8% in the 52 weeks ending Sept. 5, according to IRI data; however, refrigerated whole milk increased 1.2% during the timeframe.

Although it isn’t the fastest-growing segment, refrigerated dairy milk still accounts for the lion’s share of category sales, thus driving the overall success of the dairy category, Mintel’s Shor notes. Consumers enjoy the familiarity and nutritional attributes of traditional milk drinks, she explains. It’s also a versatile household staple, good for use in cereal, recipes or on its own, she adds

To boost sales, dairy brands can capitalize on these benefits, IRI’s Crawford suggests.

“The dairy industry feels consumers already know the benefits of calcium, protein and vitamin D, but younger consumers may not know,” he says. “Touting the benefits already in the product can help revitalize dairy.”

Currently, growth within the dairy segment is driven by specialty products, such as lactose-free, organic and ultra-filtered milk, Crawford says.

Yet, as consumers return to their away-from-home routines, dairy milk is expected to lose much of the growth that it gained during the pandemic by the end of 2021, Mintel’s Shor notes. As a result, plant-based foods and beverages are expected to see strong growth, experts note. BMC’s Hemphill adds that he expects even more plant-based options to emerge.

But the verdict for the dairy segment isn’t finished just yet. IBISWorld’s Curran expects the liquid dairy beverages and dairy alternatives segments to grow in 2021 as supply chains stabilize following the pandemic.